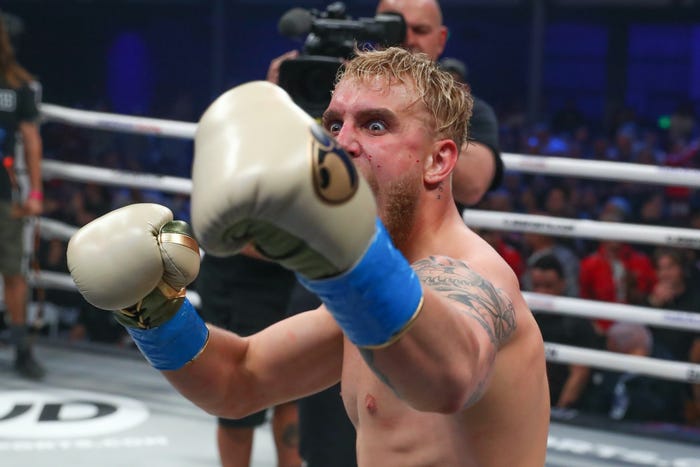 If you don't like Jake Paul existing in boxing then tough s—.

He's here to stay, it's the eve of his second fight of the year, and he's already challenging the UFC's biggest names to crossover from the Octagon into the ring. He's impossibly hard to ignore.

The YouTube creator has long been a staple of Insider's digital culture pages, even speaking to this publication earlier in the year.

But this week he spoke to Insider's combat sports correspondent for the first time and, judging by the way he's talking, it won't be the last.

The first question I asked Paul was an easy one. At 23, Paul has millions of subscribers, and brought in $21.5 million in 2018 alone, according to CBS News.

So having made more in one year than many boxers earn in an entire career, why fight?

As Hall of Famer Marvin Hagler once reportedly said: "It's tough to get out of bed to do roadwork at 5 a.m. when you've been sleeping in silk pajamas."

Essentially what Hagler meant is that once you've made your money, why keep putting yourself through the grim reality of early runs, grueling sparring sessions, and getting punched repeatedly in the face? Especially when you could be kicking back at home with a cigar and a glass of fine cognac.

For Paul, the answer to that question is simple.

"I'm not fighting to make money," he told Insider. "I'm fighting because I want to and I love it."

That resonated with this author. And it might do with other fight fans too, even if they can't stand the idea of a YouTuber continuing to enter the boxing ring.

I haven't made $21.5 million my entire life, let alone a single year, but if I had, I'd probably think: 'To hell with it,' recruit the top trainers in my area, work out for fun, and cosplay as an in-your-face fighter just to annoy people.

I can see where Paul is coming from.

He's one fight into his pro career with one knockout victory on his record, albeit against a fellow content creator called AnEsonGib.

His fight Saturday against the former NBA player Nate Robinson is against an actual athlete this time, though still not a fighter.

The pair's cruiserweight match serves as the co-main event for the highly-anticipated Mike Tyson and Roy Jones Jr. exhibition, and is scheduled for six rounds.

If Paul has his way, it will last one.

Saturday's show is just the right amount of weird for me

"I wake up every day with fire in my belly," Paul said. "That's just where the passion, hard work, and dedication comes from.

"All this entertainment in LA is great — YouTube, acting, music — and I love it, but boxing just sits differently with me.

"I really have to push myself outside of my comfort zone to do those sprints, to wake up on a Saturday morning when all my friends are in Los Angeles, out at the clubs, making music, having fun, and I'm up early, isolated, running sprints, and nearly puking.

"And then going sparring? I just love it. I see a huge future for me in this sport."

With 20 million subscribers on YouTube, Paul isn't one to shy away from the limelight, and is all too happy to talk down to Robinson, a three-time slam dunk champion.

"He's just a capper, he makes s— up, and his s— talking is weak," said Paul. "He initiated this fight on Instagram talking s—. So I was like, alright, let's fight then, Nate.

"He basically said he was from the mud and I had a silver spoon all my life. I just said, 'Nate, your dad was in the NFL and your mom owned a beauty salon. My dad was a roofer and my mom was a nurse.'

"Like, you're saying you're from the mud, but you're not. I never had a silver spoon growing up. I'm a self-made millionaire.

Paul said that he thinks mentioning Robinson's upbringing got under the skin of the former NBA dunk champion.

"His whole entire thing is, like: 'Jake's not working as hard as me. We're doing the nitty gritty, in a small gym, in Seattle, getting out the mud.'

"That doesn't mean anything in boxing," he said.

"I've seen footage. I know he's dedicated and working hard. He seems light on his feet. But there's nothing he can do, or his coaches can do to train him, for me.

"I'm going to take him down in the first round," Paul predicted. "I've said this from the day this contract was signed, and I'm still saying it now.

Robinson's training has left Paul un-frightened and unimpressed. "I'm not impressed with anything he's doing," he said.

"I also have a youth advantage. I'm a lot better looking than he is, which is important in boxing," he said, failing to conceal a laugh.

"If you look good, that's what takes it to the next level."

The novice boxer told Insider he wants to "take care of business by producing a spectacular performance" this weekend.

But, after that, he'll likely be engaging MMA athletes in verbal warfare on social media, looking to lure one of them into the ring for a boxing rules contest.

As for who that first MMA challenger could be, Paul mentioned the former Bellator welterweight champion and former One champion, Ben Askren, whose career stalled when he moved to the UFC.

"Ben Askren has been saying he wants to fight me," Paul said. "He's on Twitter talking s—.

"Even though he got knocked out in five seconds [by Jorge Masvidal]. So he has no place to speak from.

"If you're a human and you can be knocked out in five seconds then you shouldn't be fighting. Retire, delete your Twitter, and then go into a hole and hide — that's just embarrassing."

If Paul fights and beats Askren, he says, then there's an obvious next target: Conor McGregor.

"Once I take out a legitimate MMA fighter in the boxing ring, people are gonna be like, 'Damn, Jake Paul vs. Conor McGregor would be pretty entertaining.

"I'm bigger than Conor, I weigh more than Conor, and he's out of his prime, sort of washed-up.

"But me and Conor would be a more even fight. And when the fight happens, everyone will read this back and say, 'Damn, that kid's out of his mind, but he called this. Predicted this.'

"The Mike Tyson vs. Roy Jones Jr. is breaking pre-sale records," Paul said. According to a press release from the event's organizers, the show has broken a record for digital buys.

"This is a business. If I'm bringing millions in pay-per-view, and so is Conor, then that's going to be a giant fight — a big money-maker," Paul added.

"That's why, realistically, if I keep winning, take out some MMA guys in the boxing ring … the [McGregor] fight's going to happen."

Paul vows to knock Robinson out in a single round Saturday

"I know your coaches are lying to you, saying, 'You got this, you did everything right, and you trained hard.'

"I know you're trying to lie to yourself. I also know those lies you're telling yourself and your coaches are telling you aren't working.

"And on Saturday, I'm going to embarrass you in front of your family, with tens of millions of people watching, by knocking you down and out to the canvas."

The main card of the Tyson vs. Jones exhibition begins at 9 p.m. ET airing on cable provider pay-per-view, and online platforms Triller and Fite TV, and costs $49.99 to watch.