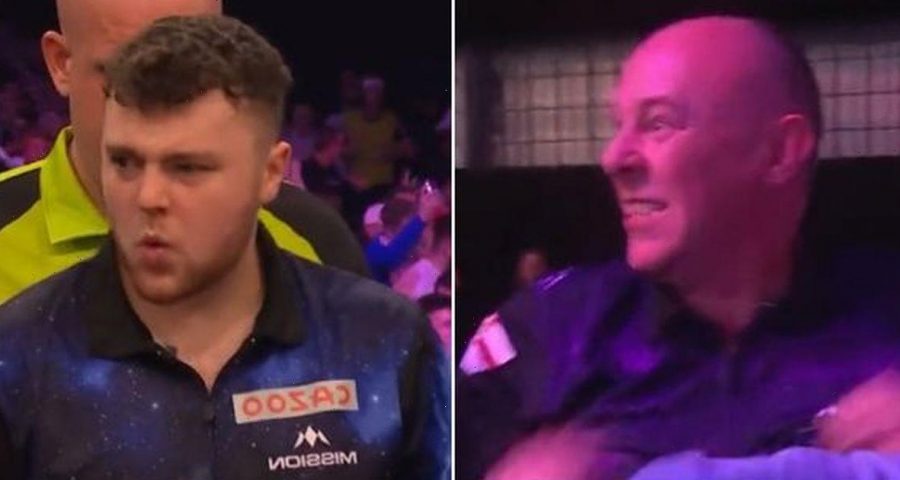 Josh Rock is the talk of darts after his stunning performance, including a nine-darter, in defeat to Michael van Gerwen at the Grand Slam in Wolverhampton.

Van Gerwen edged an incredibly high-quality contest 10-8, but it was the 21-year-old Northern Irishman who stole the show as he followed back-to-back 180s with a nerveless 141 checkout in the second leg. It took a 142 checkout from Van Gerwen to edge ahead for the first time in the match at 8-7 and the three-time world champion needed to average 107.71 in a thrilling battle.

Rock, who injured himself celebrating the nine-darter, said: “I’ll never forget that. I thought I’d broken my ankle afterwards. But it didn’t affect me during the game.

“If you hit a nine-darter on stage, I know it’s only one leg, but nine perfect darts gives you a lot of confidence, so it just gives me a big massive boost.”

Rock had his ankle strapped up after the game and will now be preparing for the upcoming Players Championship and the big event of the year, the World Championship at the Alexandra Palace.

He could have been back in action as early as tonight (Friday). Rock was supported in Wolverhampton by his dad, who could be seen celebrating the nine-darter wildly. And according to Sky Sports’ Emma Paton his old man was keen for him to play in a local league match.

Who will win the Grand Slam of Darts? Tell us in the comments section below.

“I saw him at the hotel last night, his ankle was strapped up, limping,” said Paton ahead of the first quarter-final between Michael Smith and Joe Cullen.

“Although he said his dad wanted him to play tonight in some pub league. I think he’ll be all right with that!", she joked.

Pundit Wayne Mardle added: “You saw his dad’s emotion when all that was happening. These are special times. We don’t know what he’s going to achieve but what he’s achieving at the moment is incredible.

“He’s so inexperienced but he’s so advanced in the way he can play the game. You can see in his interviews, he speaks so well.”

Meanwhile, Smith was the first man to book a place in the semi-finals, winning the last three legs in a row to beat Cullen 16-15 in an epic affair.