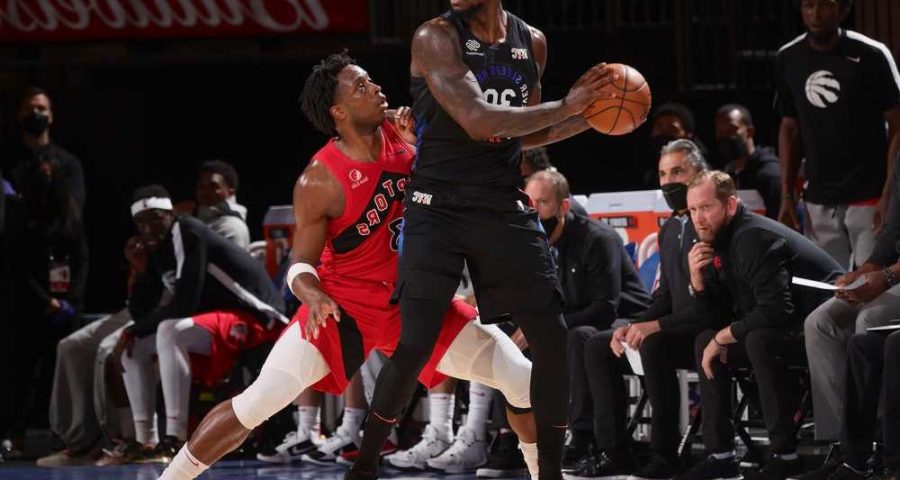 Knicks star was ‘saved’ by brass before breakout season

Julius Randle has lifted the Knicks onto Cloud 9.

Randle pumped in another 31 points as the Knicks ripped off their ninth straight victory with a nationally televised, 120-103 win over the Raptors in a Saturday matinee at the Garden.

Randle, who had 20 by halftime, fired in five of seven from 3-point range to score 30-plus points for the sixth time in seven games. He added 10 rebounds and finished with a double-double, as did RJ Barrett (25 points, 12 rebounds).

The Knicks, who moved to a stunning 34-27, are 4-0 on their six-game homestand and face the lofty Suns on Monday as they go for 10 in a row. It’s their longest winning streak since 2013, when they reeled off 13 straight.

When Randle was on the bench, disappointing rookie lottery pick Obi Toppin got hot early in the fourth quarter to deliver the knockout blow to the 12th-place Raptors (25-35). He drained two early fourth-quarter treys and was 3-for-3 on the day from behind the arc, finishing with nine points in 8:38.

Behind Randle’s 20 points, the Knicks took a 64-59 halftime lead as they shot 61 percent from the field.

The Knicks were up 30-26 after one quarter when Randle set the early tone by banging in three 3-pointers in the opening four minutes. Then the lefty All-Star forward powered through three red jerseys for a layup late in the quarter to give him 13 points and the Knicks the four-point bulge.

Point guard Derrick Rose finished with 19 points. He alighted the team with a steal on Malachi Flynn and speeding downcourt like he was 22 — not 32 — for a breakaway layup.

When the Raptors got close late in the half, veteran Reggie Bullock, the Knicks’ 3-and-D dynamo, ripped off three straight 3-pointers.

The Knicks were 10-of-17 from 3-point range by intermission — their deep shooting a critical reason for this winning streak.

“It’s tough for teams to play here,’’ RJ Barrett said in an oncourt interview, which led to the 2,000 fans on hand to erupt into an “RJ Barrett” chant.

Before the game, Raptors coach Nick Nurse sounded like the Knicks weren’t going away as Toronto tries to get into the play-in tournament as a top-10 team despite playing this pandemic season on the road, based in Tampa Bay. They were on a four-game winning streak and are better than their record.

“They’re playing like a team that doesn’t beat themselves,’’ Nurse said. “They don’t make many mistakes. Solid, physical defense. low turnovers. They don’t get shook up or get rattled easily. They got some really experienced guys. A lot to like on this team.’’

In the third quarter, the Raptors surged ahead by two points as Knicks starting point guard Elfrid Payton became sloppy.

Payton was removed with four turnovers for Rose, whose name was being chanted by the frustrated crowd. On one Payton turnover, Randle wrapped up a streaking OG Anunoby to foul him and swing his arm in anger.

Anunoby and Fred Van Vleet each finished with 27 points.

The Knicks tightened their defense in the final minutes of the third period and took a 88-83 lead after three. Randle scored on a late drive and carried 28 points into the fourth quarter.

The Knicks started to run away with it at the outset of the fourth quarter when rookie Immanuel Quickley bagged a 3-pointer and found fellow rookie Toppin in the corner for another 3-ball.

Toppin scored again on a 3-pointer in transition off a bullet feed from Rose, forcing Toronto to call timeout down 16 points.