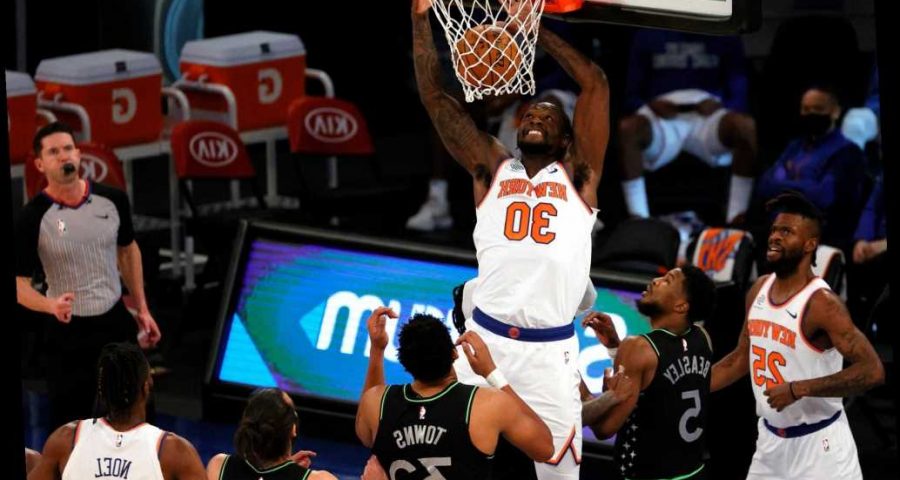 Fans finally will return to the Garden in limited numbers beginning Tuesday, two nights after the Knicks barely avoided a catastrophic loss against the league’s worst team in their final game in front of an empty arena.

The Knicks flushed a 21-point second-half lead, but they ultimately gave Tom Thibodeau the gift of a victory in his first game against the Timberwolves since he was fired by Minnesota in 2019, eking out a 103-99 win Sunday to open a four-game homestand.

“We’re striving to become a 48-minute team. We’ve got a long way to go, and hopefully we learn from this,” Thibodeau said. “They made up ground quickly on us, but I do like the fact that we kept fighting and we found a way to win the game.

“Ultimately, that’s what’s important is to find a way to win. Whatever we have to do down the stretch to win the game, that’s what we want to focus in on.”

In his final contest before All-Star reserves are named Tuesday, Julius Randle finished with 25 points and 14 rebounds as the Knicks improved to 15-16 ahead of their game that night against Golden State.

“Absolutely, one of the things I said after, I was really proud of our team,” Randle said. “A lot of times when you lose a lead like that and momentum shifts in such a big way the opposite way, it’s easy to crumble and cave in and let the game go. We just kept fighting, kept battling and got stops and made plays down the stretch when we needed to. I’m proud of our team for that.

“Obviously not the way we wanted to do it in the end, but we got it done and that’s all that matters.”

Karl-Anthony Towns scored a game-high 27 points, Ricky Rubio had 18 and rookie Anthony Edwards finished with 12 for the Timberwolves (7-24). The league’s worst team fired coach Ryan Saunders — Thibodeau’s replacement — after the game, according to ESPN.

The Jersey-bred Towns was playing his seventh game after missing four weeks following a positive COVID test in January. His mother, Jacqueline, and six other family members died last year from the virus.

“He’s a terrific player. He’s gone through a lot of adversity, and obviously you care about him as a person first and his family — his dad, sister,” Thibodeau said. “In terms of basketball, when he’s healthy, he’s one of the best players in the league. So it’s been a little unfortunate in terms of his injuries the past couple of years, but he’s a terrific talent.”

The Knicks had three days off since Wednesday’s ugly loss in Orlando because of Saturday’s postponement against San Antonio after multiple Spurs tested positive for COVID-19.

They led 86-65 late in the third quarter, but Minnesota opened the fourth on a 20-6 run and closed within two on a 3-pointer by Towns with barely five minutes remaining.

An inside bucket by Towns put the T’Wolves ahead by one with 2:48 to go, but Randle sank two free throws and Alec Burks (13 points) added four more from the stripe in the closing seconds.

Taj Gibson, in the game for fouled-out starter Nerlens Noel, also made a key stop against Towns in the final minute to close out the nail-biter for Thibodeau.

“I think we’re trying to win every game. I’m very happy we got this one for Coach Thibs, but we need to continue to keep it rolling,” said RJ Barrett, whose 21 points included a driving layup with 1:59 remaining. “It’s huge. We faced adversity, they came back, and we stayed strong and were able to pull out the win.

“Not the way that you want it to go down, but very happy with the win.”