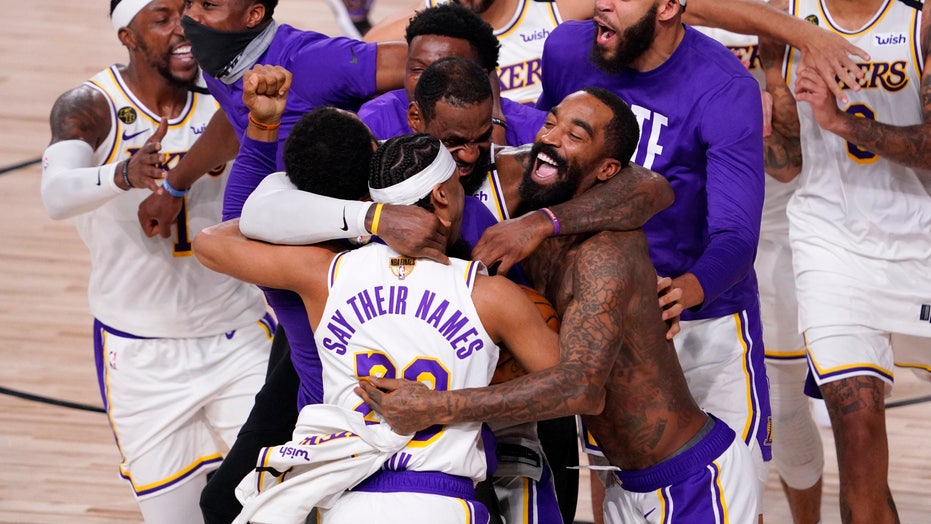 Is NBA’s activism the reason for record-low Finals TV ratings?

For the first time since 2010, the Los Angeles Lakers are champions of the NBA.

Behind a triple-double performance from superstar LeBron James, who finished with 28 points, 14 rebounds, and 10 assists, the Lakers cruised to a 106-93 victory over the Miami Heat in Game 6 of the NBA Finals on Sunday night.

AS ELECTION DRAWS CLOSER, THE NBA CONTINUES CALLS TO VOTE

The Lakers captured their 17th NBA title, tying the Boston Celtics for the most championships in league history. James was named the 2020 NBA Finals MVP after averaging 29.8 points, 11.8 rebounds, and 8.5 assists while shooting 59 percent from the field over the six games.

James won his fourth title, doing it with a third different franchise, and he's the first player in NBA history to win Finals MVP with three different teams.

Anthony Davis added 19 points and 15 rebounds for the Lakers, who dealt with the death of the iconic Kobe Bryant in January and all of the obstacles with leaving home for three months to play at Walt Disney World in a bubble designed to keep people safe during the coronavirus pandemic.

In this Game 6 matchup, the Lakers held a 64-36 lead at the half. The 28-point halftime lead was the second-biggest in NBA Finals history.

Bam Adebayo had 25 points and 10 rebounds to lead the Heat, which also got 12 points from Jimmy Butler – the player who, in his first Heat season, got the team back to title contention. Rajon Rondo scored 19 points for the Lakers.

With that, the league’s bubble chapter, put together after a 4 1/2-month suspension of play that started March 11 because of the coronavirus pandemic, is over.