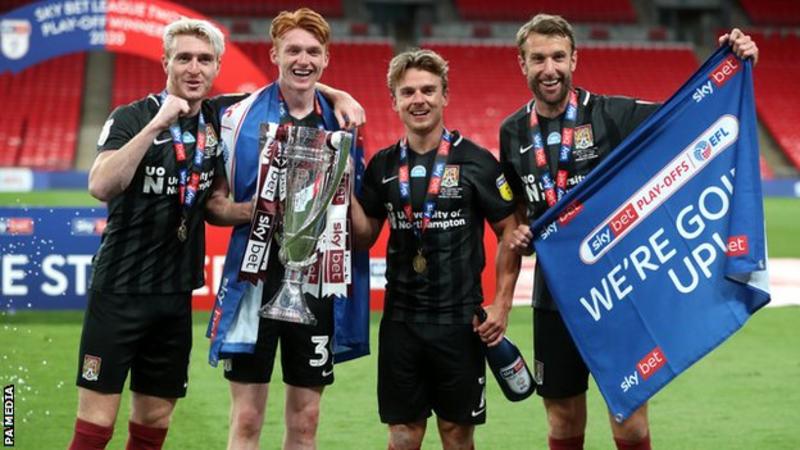 Northampton Town dominated 10-man Exeter City to win the League Two play-off final and gain promotion to League One at an empty Wembley.

The Cobblers bombarded Exeter in the opening period and went ahead through Ryan Watson’s early deflected strike after a long throw.

Callum Morton doubled the lead when he reacted quickly to tap in after a free-kick was headed across the face of goal as Exeter repeatedly failed to deal with Northampton’s high balls into the box.

Exeter’s Dean Moxey was sent off early in the second half for a nasty tackle on Watson before late goals from Sam Hoskins and Andy Williams wrapped the game up.

The victory sees Northampton promoted back into the third tier after two seasons in League Two. 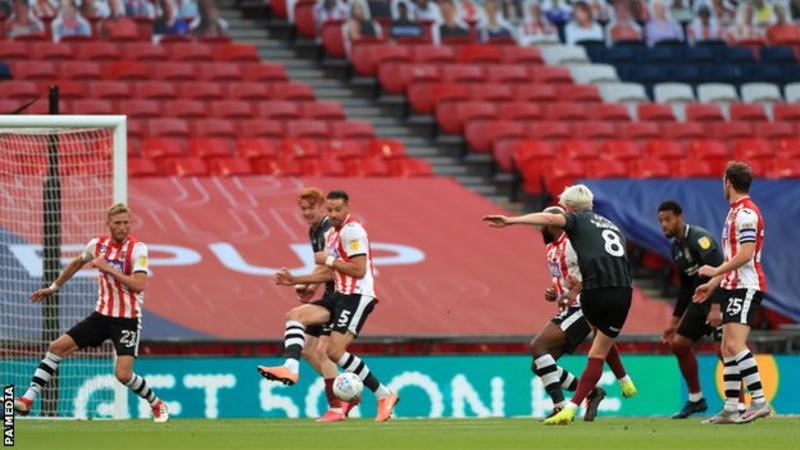 Northampton only qualified for the play-offs by virtue of average points per game after League Two was curtailed because of the Covid-19 pandemic as they leapfrogged Port Vale into the final qualifying position.

Coronavirus restrictions meant there were no fans in the stadium to see the game – which should have been played in late May – and Exeter supporters will have been glad they had not made the 175-mile journey as a robust Northampton overpowered their men.

City could not deal with the Cobblers from long throws and set-plays as Keith Curle’s side registered eight efforts on target to Exeter’s zero in a first half that, had it not been for goalkeeper Jon Maxted, would have seen the Grecians more than two behind at the break.

It took just 11 minutes for the high balls to take effect when Nigel Atangana could only head a long throw from Charlie Goode clear to Watson, who shifted the ball onto his left foot and calmly struck past Maxted with a shot that clipped Aaron Martin on the way through.

Exeter could have been further behind five minutes later as first Hoskins had a close-range effort tipped over after Nicky Adams’ free-kick was parried, before French striker Vadaine Oliver – who the Grecians’ defenders struggled to deal with – headed over from another long throw seconds later.

Another big ball into the box caused the second goal – a free-kick from halfway was swung in towards centre-back Scott Wharton, whose header was flicked on by Jordan Turnbull into the path of West Brom loanee Morton, who fired in to add to the two goals he scored in the semi-final second leg win over Cheltenham last week.

It would have been worse for Exeter were it not for Maxted who pulled off a succession of fine saves to keep out three headers from Wharton and another from Oliver. 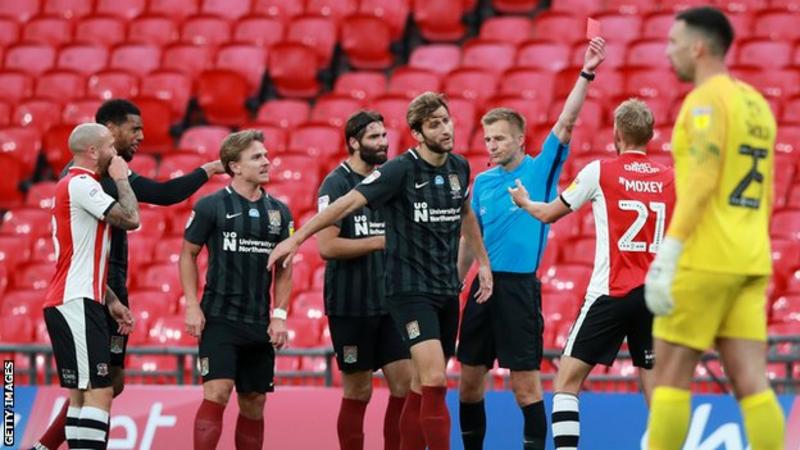 No team had ever come back from two goals down at half-time to win a play-off final and Exeter’s record against Northampton did not bode well – they had won just three of their past 27 meetings, losing 17 times.

But any hope City had of getting back into the game evaporated after an hour as their most-experienced player, Dean Moxey, was sent off after a nasty lunge on Watson.

Morton had the chance to wrap the game up with 20 minutes left as he was put through on goal by Oliver, but his shot through the on-rushing Maxted’s legs dribbled just wide of the far post.

Exeter failed to force Northampton goalkeeper Steven Arnold into a single save and the game was settled with 10 minutes left as Hoskins side-footed home from 12 yards after good work from Morton allowed substitute Mark Marshall to make his way into the penalty area and slide the ball across to the goalscorer.

Exeter’s play-off final misery was completed with a goal that summed up Northampton’s approach – Goode’s long throw was flicked on by Harry Smith and Williams guided the ball past Maxted.

It was a third League Two-play-off final defeat in four years for Exeter, who were beaten by Blackpool in 2017 and Coventry City in 2018.

Northampton’s fourth EFL play-off final ended in victory 23 seasons after their only other Wembley win for promotion.

John Frain’s stoppage-time free-kick saw the Cobblers beat Swansea City 1-0 at the old Wembley in 1997 to win promotion from the old Third Division.

Since then the club has yo-yoed between the third and fourth tiers of English football, although they were 90 minutes away from making what is now the Championship back in 1998 when they lost 1-0 to Grimsby in the old Division Two play-off final.

Since then they have reached the play-offs four more times, but had only otherwise reached Wembley in 2013 when the Cobblers lost the League Two final 3-0 to a Bradford City side that had made the League Cup final earlier that season.

The win ends two consecutive seasons in the fourth tier for the Cobblers, who will now be hoping to establish themselves in League One. 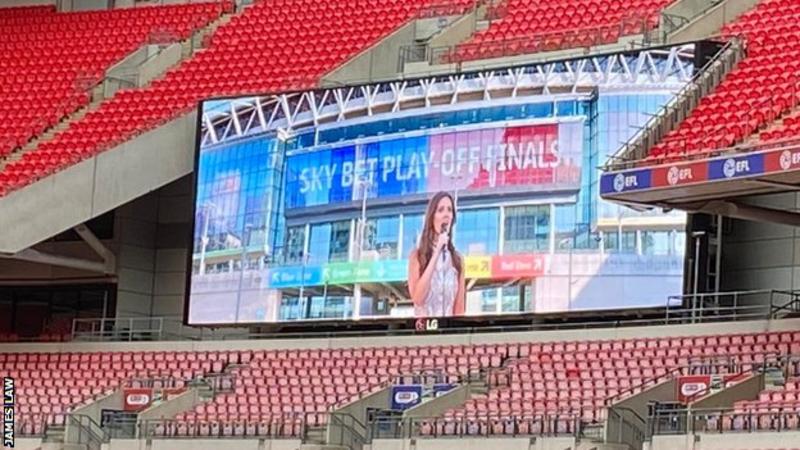 When I saw just one supporter in 30 minutes on Olympic Way before the match I knew this was going to be an occasion like no other.

For what was thought to be the first-ever competitive game behind-closed-doors at Wembley, there was strobe lighting and a pre-recorded national anthem to try to recreate the feeling of such an important game.

The football itself was largely enough of a distraction to take away from the weirdness of the surroundings, with the sounds of typing from the press benches, potty-mouthed players and the Wembley generators replacing the usual deafening noise from the stands.

Arguably the strangest moment was not the aftermath of the Northampton goals, but the lack of reaction to Exeter’s Dean Moxey being sent off – there was no noise and I had to double-check that he had in fact been red-carded.

On the final whistle the Cobblers had an outpouring of emotion, celebrating in a big huddle down a camera lens to try to bring some of the passion to the living rooms of their absent fans.

This was a sign of things to come – the FA Cup and Champions League finals, as well as the League One and Championship play-off finals, will all be held in front of empty stadiums over the next five weeks.

Mark Marshall (Northampton Town) wins a free kick in the attacking half.

Attempt missed. Harry Smith (Northampton Town) right footed shot from the left side of the box is high and wide to the right. Assisted by Sam Hoskins.

Tom Parkes (Exeter City) wins a free kick in the defensive half.

Aaron Martin (Exeter City) is shown the yellow card for a bad foul.

Attempt missed. James Olayinka (Northampton Town) left footed shot from the right side of the box is high and wide to the left. Assisted by Charlie Goode.

Charlie Goode (Northampton Town) wins a free kick in the defensive half.

Ryan Bowman (Exeter City) wins a free kick in the defensive half.

Attempt missed. Archie Collins (Exeter City) right footed shot from the centre of the box misses to the left. Assisted by Ryan Bowman following a corner.

Attempt missed. Mark Marshall (Northampton Town) right footed shot from the right side of the box is high and wide to the right. Assisted by Sam Hoskins.

Attempt missed. Callum Morton (Northampton Town) right footed shot from the right side of the box is close, but misses to the left. Assisted by Vadaine Oliver with a through ball following a fast break.

Attempt missed. Scott Wharton (Northampton Town) left footed shot from outside the box is too high.

Steve Arnold (Northampton Town) wins a free kick in the defensive half.

Tom Parkes (Exeter City) wins a free kick in the defensive half.

Attempt blocked. Scott Wharton (Northampton Town) header from the centre of the box is blocked. Assisted by Mark Marshall with a cross.