ONE major criticism of Arsene Wenger was that he wanted every Arsenal goal to be a breathtaking masterpiece.

Well after Mikel Arteta’s men had won ugly in the Premier League against West Ham, they reached the fourth round of the Carabao Cup by scoring two absolute munters here. 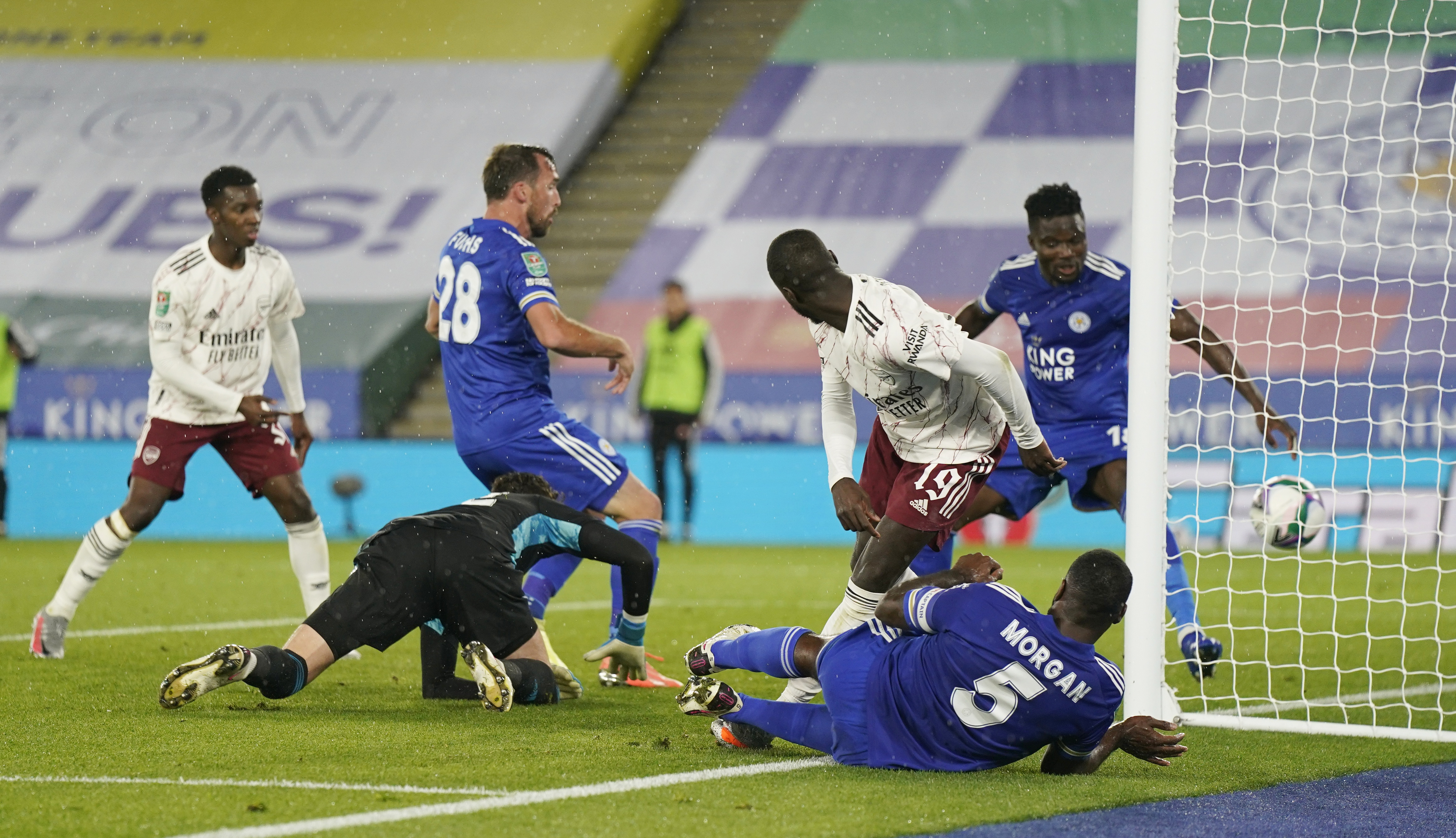 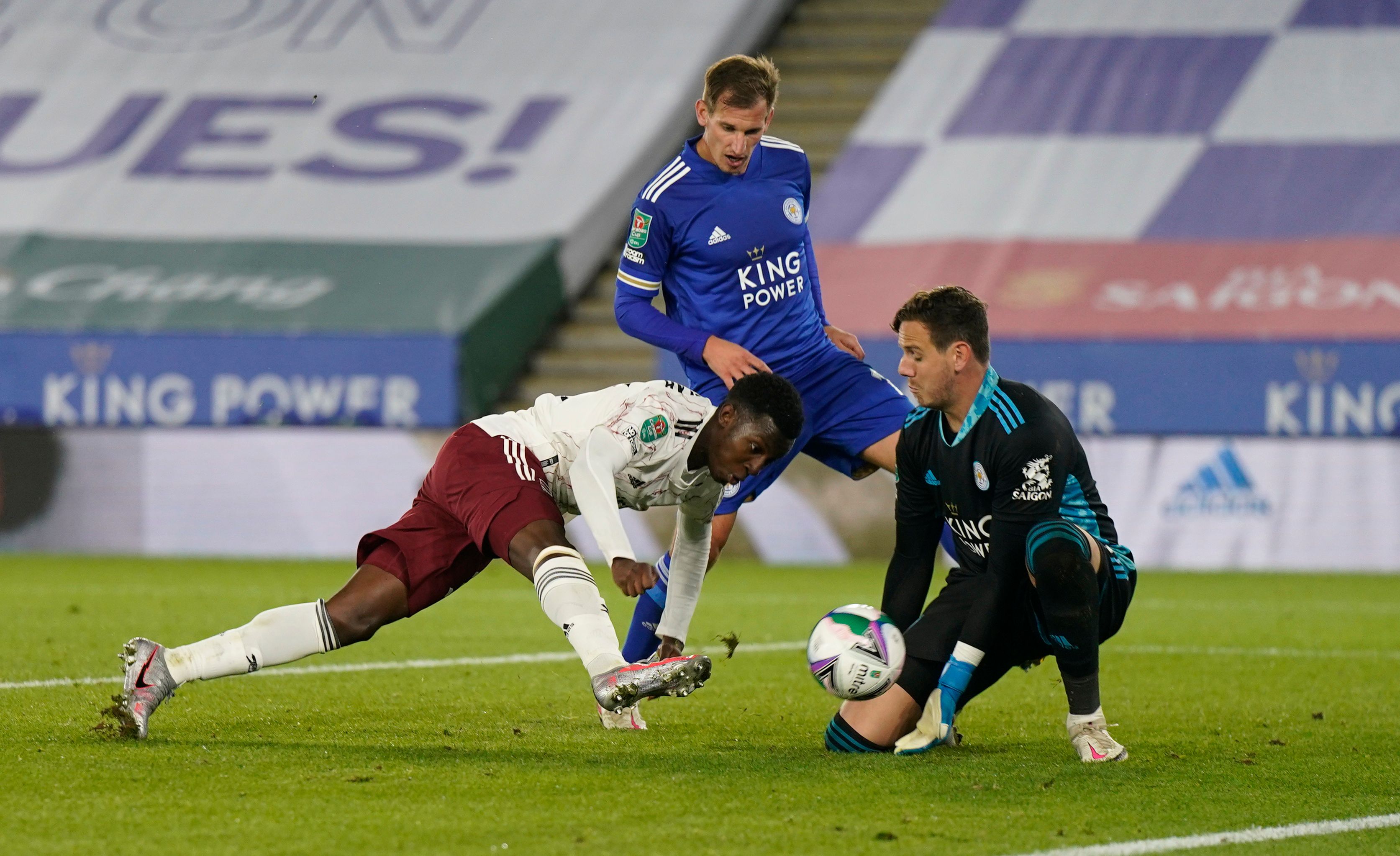 Leicester’s veteran defender Christian Fuchs bundled into his own net and Eddie Nketiah added a late second after falling over, to earn Arsenal the dubious prize of a likely trip to Anfield – provided Liverpool defeat Lincoln City tomorrow.

Arsenal already have to visit the champions in the league on Monday, so next week promises to be a major test of Arteta’s squad.

Arteta’s Arsenal can still be easy on the eye – and even with seven changes to the Spaniard’s starting line-up, they outplayed a second-string Leicester.

But they are now acquiring the knack of digging out victories when the going gets arduous.

It is a happy habit which has been largely lacking ever since Wenger’s Invincibles broke up and it augurs well for their hard-nosed young manager.

Arteta refused to include either of his outcasts, Mesut Ozil or Matteo Guendouzi, and saw some pleasing football from a youthful side.

With two wins out of two in the Premier League and a Europa League campaign looming for both, this competition was the priority of neither manager.

He gave a full debut for Kiernan Dewsbury-Hall – a useful midfielder rather than a National Trust stately home.

Arteta stuck with only four of the men who had squeezed past the Hammers on Saturday, yet there was no lack of attacking quality.

Despite their dominance of the FA Cup, Arsenal haven’t won the League Cup for 27 years, when the competition was sponsored by Coca-Cola and nobody had heard of Wenger.

But the Gunners, in their apparently blood-stained away kit, had the first sniff when Reiss Nelson won possession and cut in from the left only for Danny Ward to tip his rising shot onto the roof of the net.

Bernd Leno had to be quick off his line to smother a Kelechi Iheanacho effort.

But Arsenal were slick, fluid and lively in attack – Bukayo Saka skinned Marc Albrighton but Joe Willock could not connect with his cross.

Then a stonewall penalty for Arsenal, which was somehow stonewalled by myopic ref Peter Bankes.

Nketiah played in Saka, who was clearly bundled over by Daniel Amartey – leaving Arsenal’s team and bench to scream their appeals in vain. 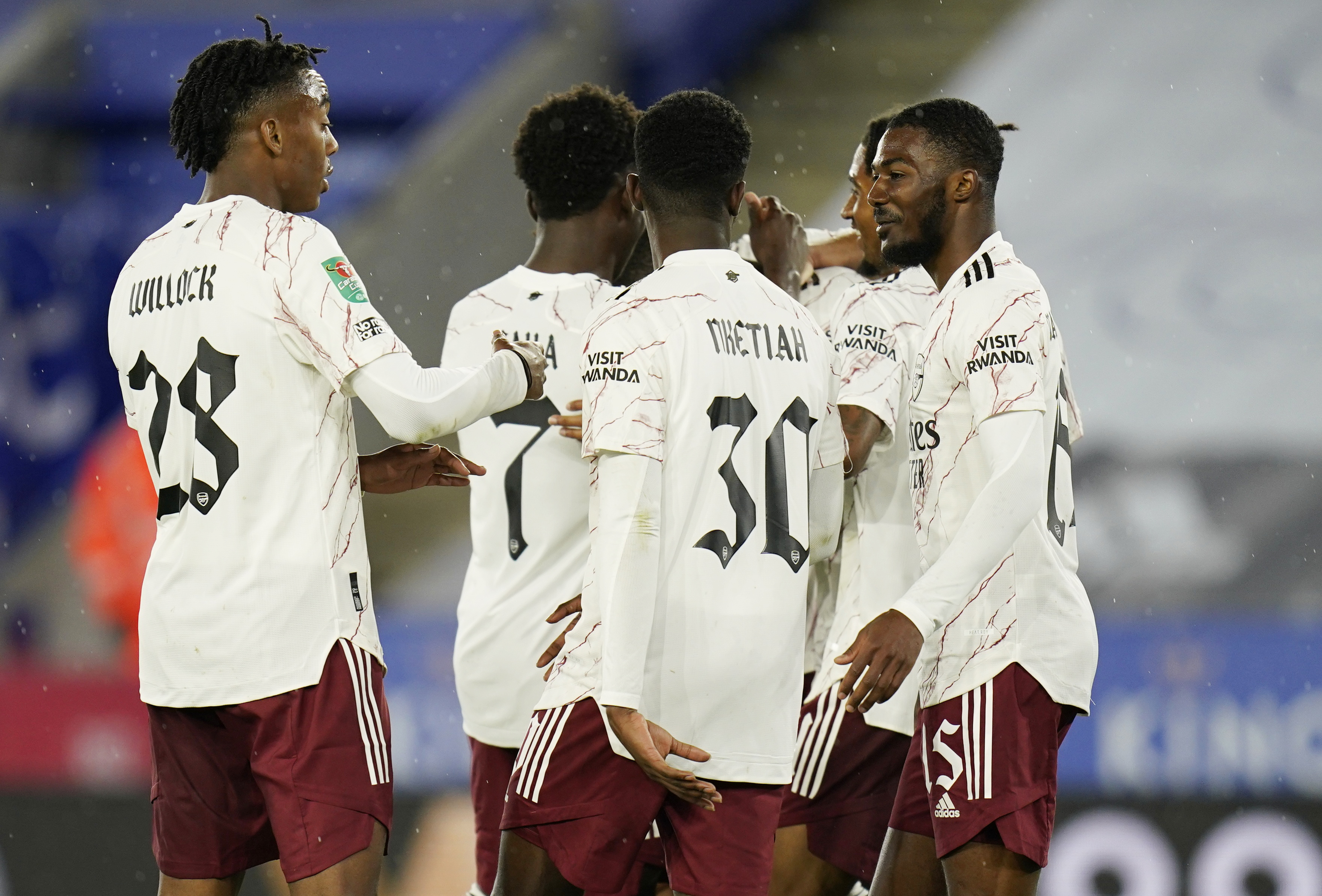 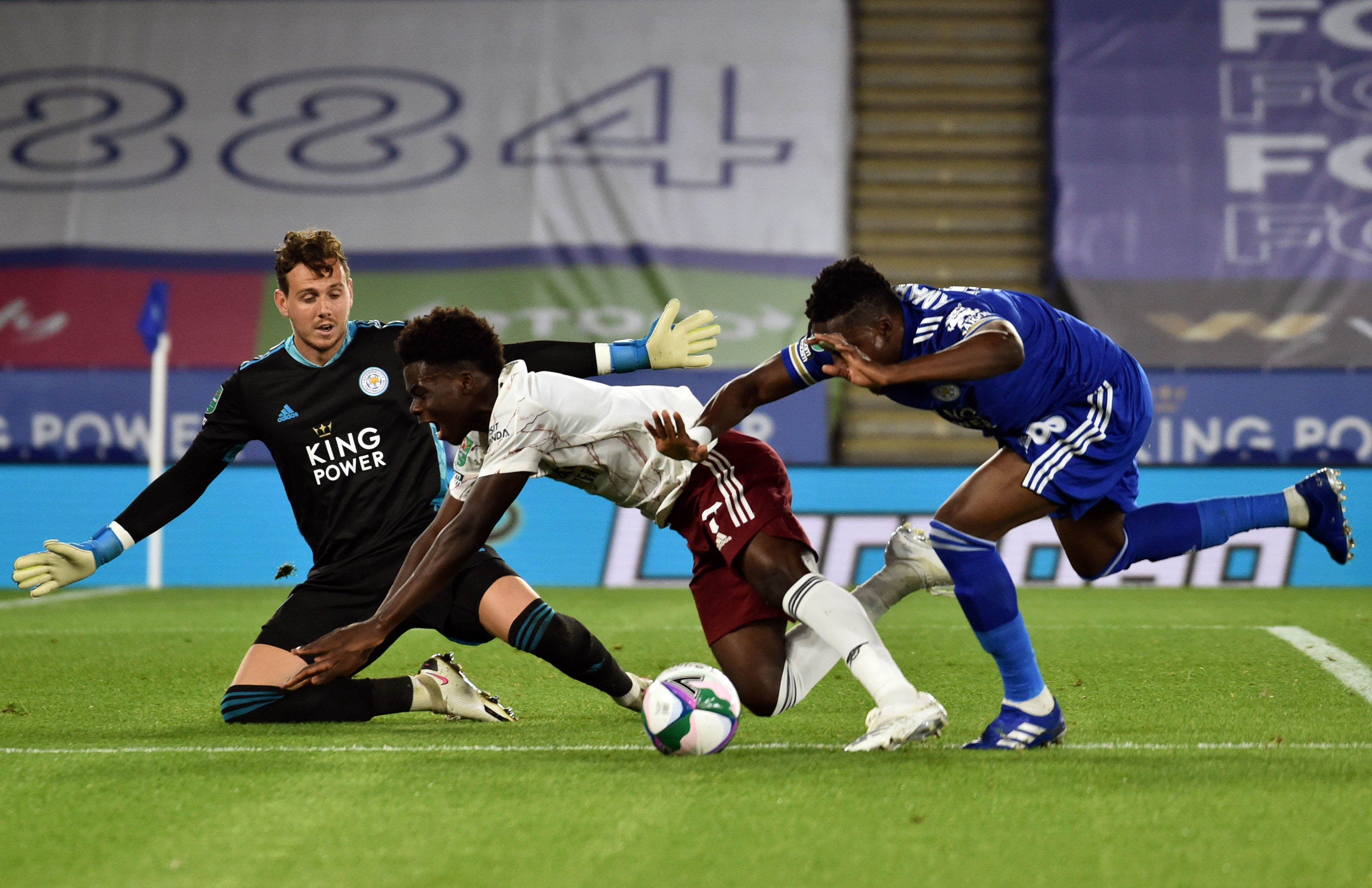 Nelson forced another save from Ward then screwed a shot wide when left unmarked from a corner.

But the one class act in this Leicester side, James Maddison – making his first start since July 1 – began to make his mark.

Having comprehensively skewered Ainsley Maitland-Niles with some saucy wing-play, Maddison cut in from the left and curled a delicious shot against the inside of the far post.

But on 57 minutes Arsenal got the opener they had deserved with a huge dollop of fortune.

Nicolas Pepe forced his way clear on the right, had one shot saved by Ward and then struck the post from the rebound, his effort cannoning in off the unsuspecting Fuchs as he and Amartey attempted to clear.

Nketiah thought he had Arsenal’s second when he lobbed Ward, only for Wes Morgan to head expertly off the line.

Foxes sub Ayoze Perez headed wide when he should have converted Albrighton’s free-kick.

But after Hector Bellerin arrived as a late sub he teed up Nketiah, who stumbled, fell and still managed to score.

It was no oil painting but you don’t win trophies for artistic impression in this game. 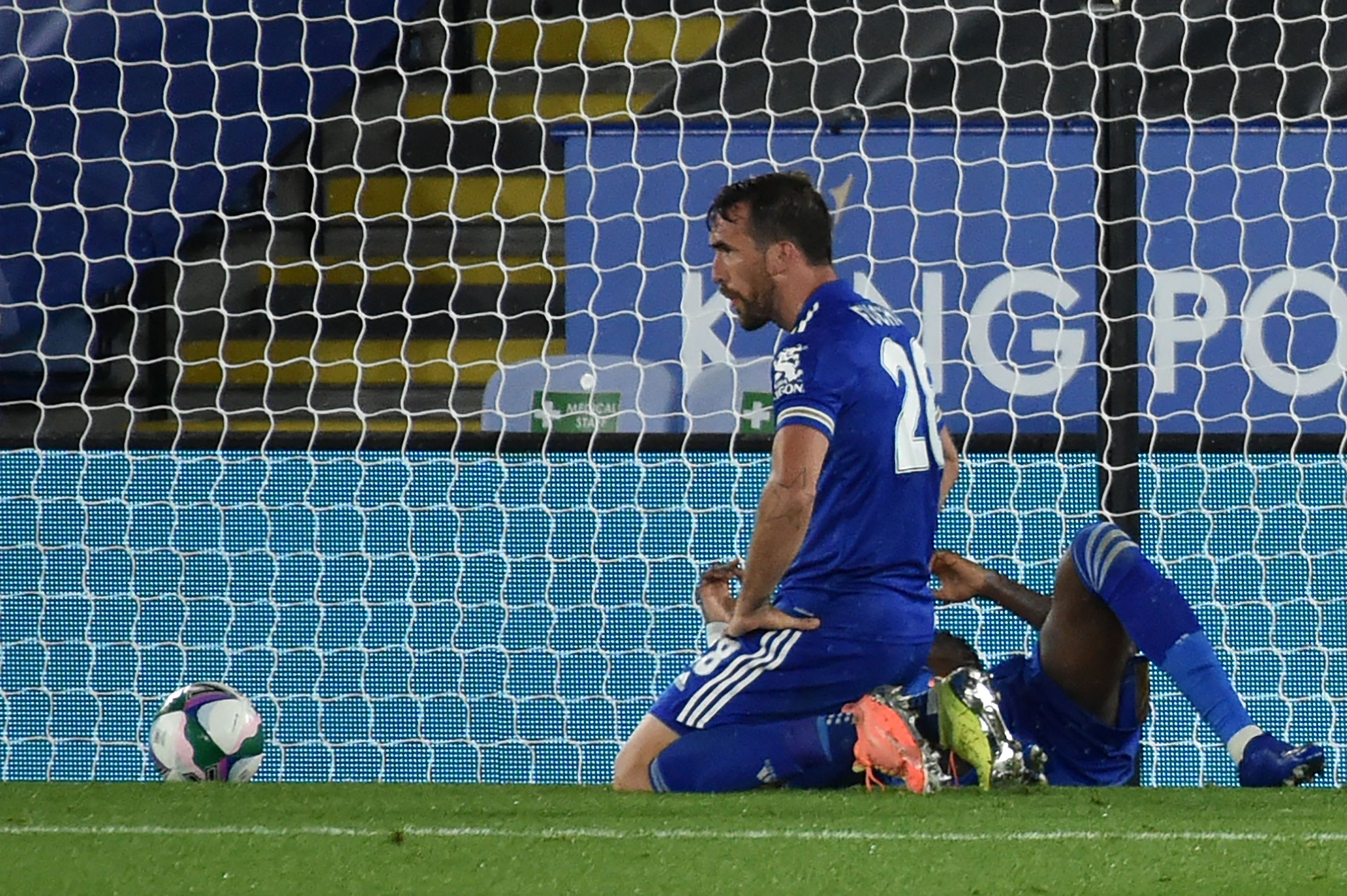 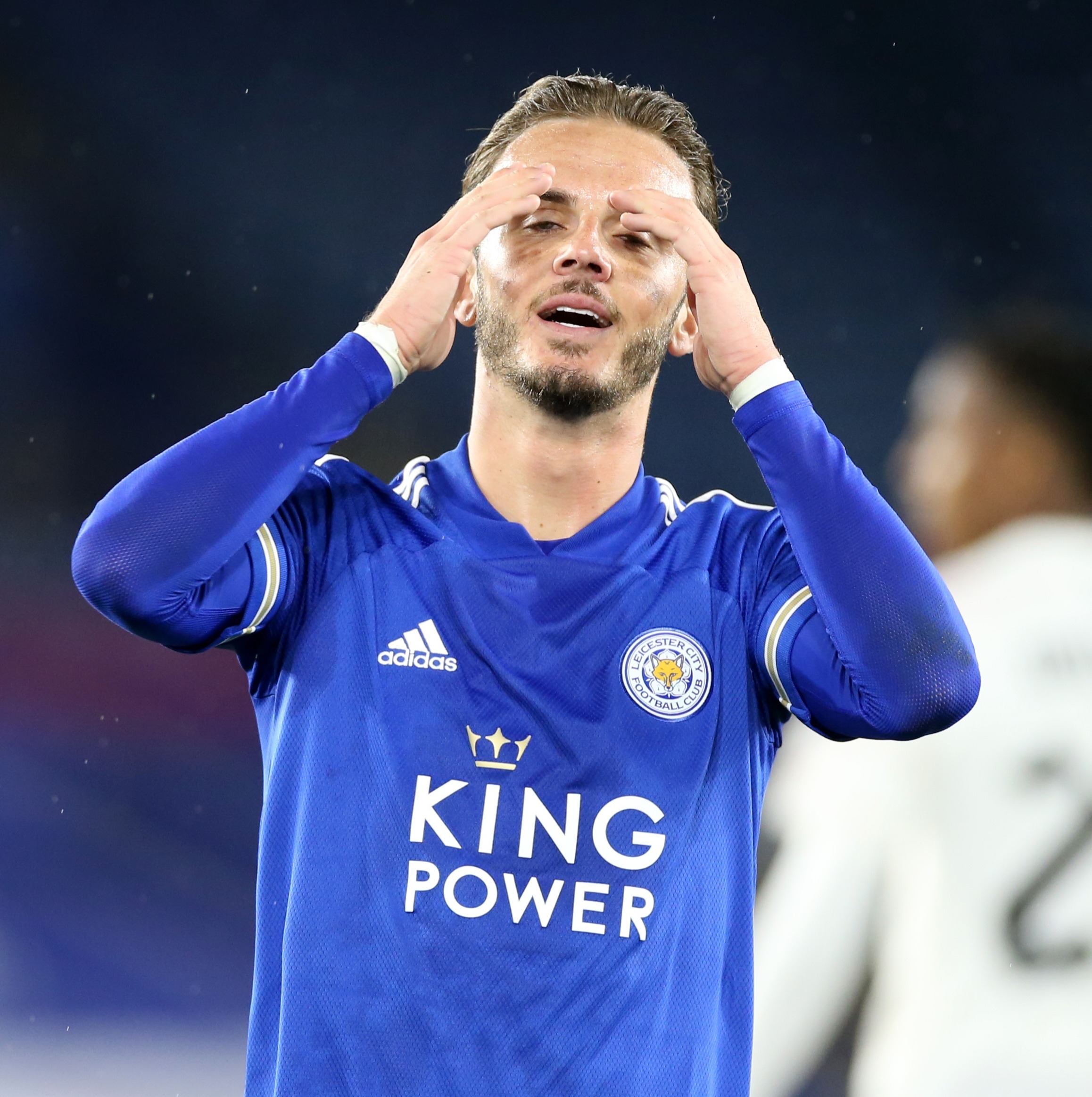 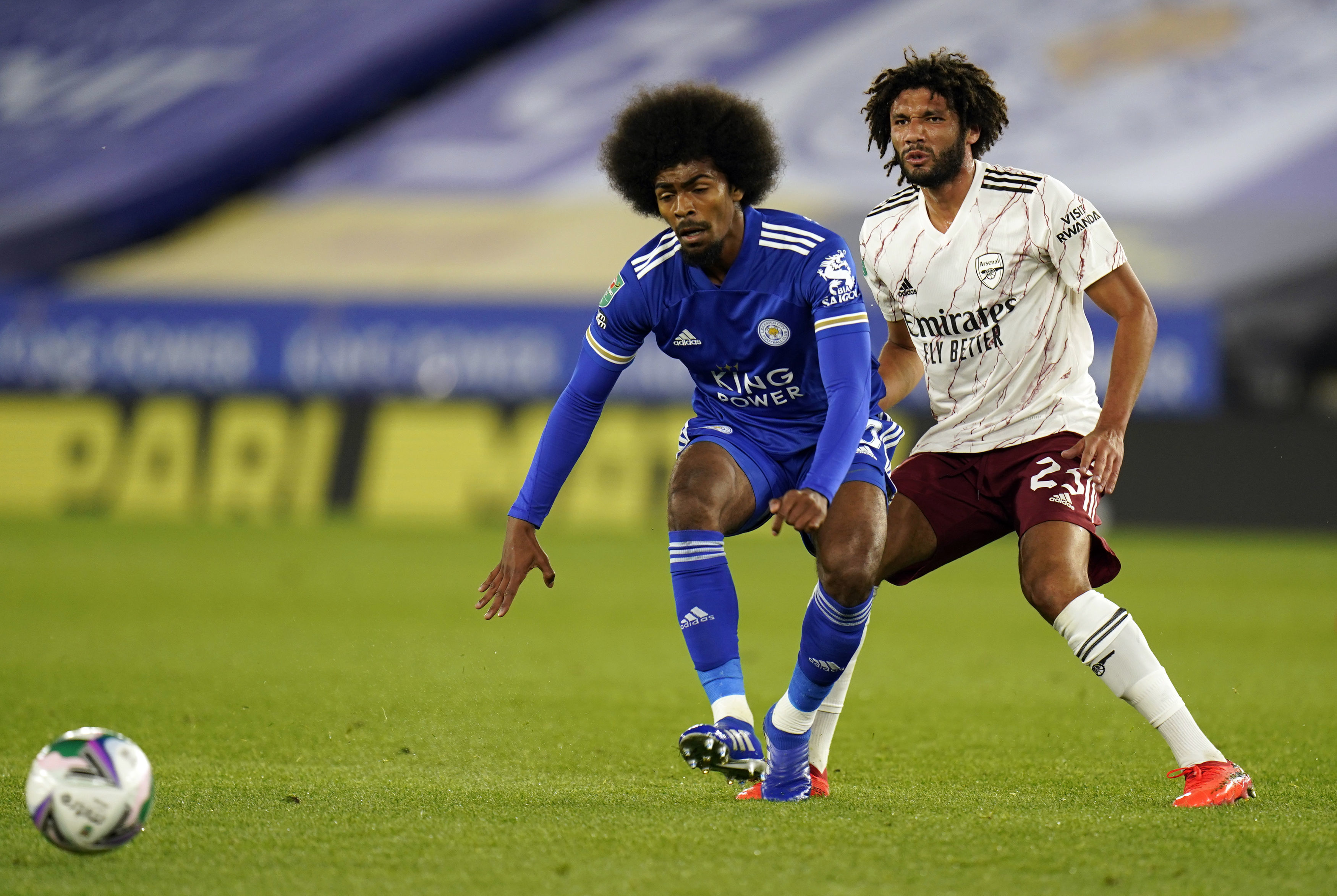