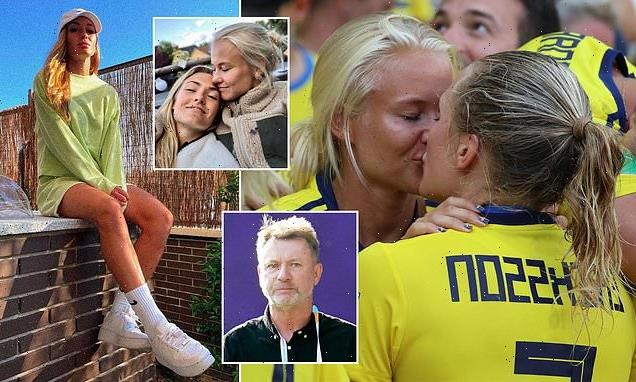 Meet the Sweden team standing in the way of England’s women and the Euro 2022 final: The captain is one half of football’s lesbian ‘power couple’, their forward is the daughter of Kosovan migrants… and they are managed by a former PE teacher!

Sweden are the team standing in the way of England and their first major final since 2009.

The Lionesses have fallen at the semi-final stage of the last three tournaments, with defeat against the United States in the 2019 World Cup, the Netherlands at Euro 2017 and Japan in the 2015 World Cup.

With home advantage on their side, England will be slight favourites going into Tuesday night’s game. But the Swedes are the highest ranked team in the competition and will provide Sarina Wiegman’s side with their toughest test so far. 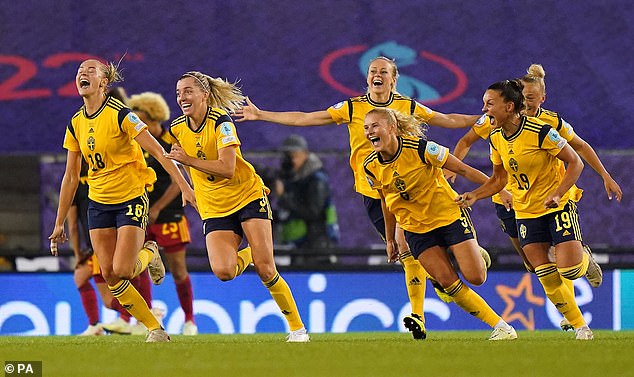 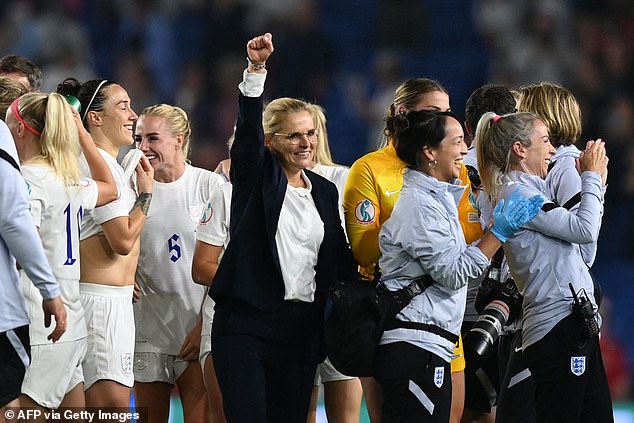 With home advantage on their side, England will be slight favourites on Tuesday night

Sweden finished third at the 2019 World Cup and second at the Tokyo Olympics last year, so will be desperate to go one step further this summer.

While they perhaps lack a standout name, the Swedes are arguably the most well-rounded team in the competition. They are organised, physical and efficient in their attacking play.

There are also plenty of familiar faces in the Sweden squad, with seven players currently playing in the Women’s Super League. Chelsea defender and captain Magdalena Eriksson is their leader and rock at the back.

Eriksson’s partner Pernille Harder, the Denmark and Chelsea forward, may be in the stands to show moral support. Harder’s Denmark narrowly missed out on a place in the knockouts, with a 1-0 defeat by Spain in their final group game. 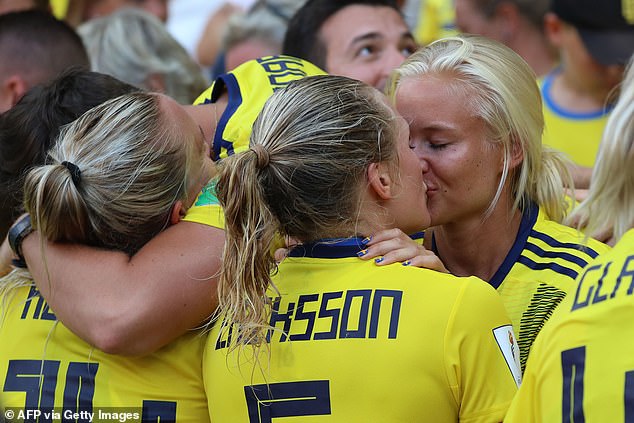 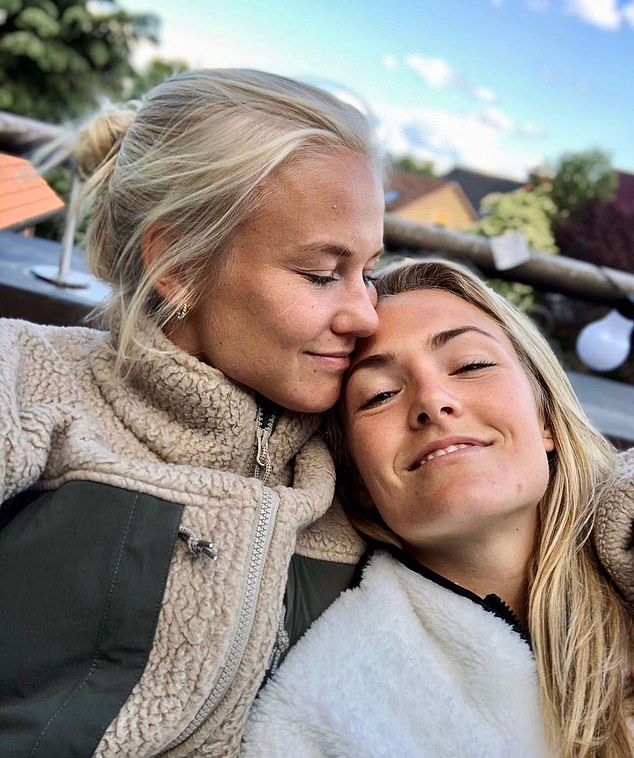 Lauded as one of football’s ‘power couples’, Harder and Eriksson have been in a relationship since 2014 and have established themselves as icons on and off the pitch.

The couple’s on-pitch kiss at the 2019 World Cup in France – which went viral on social media – instantly became a hugely symbolic moment for the sport and the LGBT community.

‘Neither me or Pernille had an objective to become gay role models,’ Eriksson told Forbes in an interview in 2020.

‘We were just quite open from the start when we started seeing each other. From then on, we’ve both had successful careers, we both became role models and well-known names. It just kind of happened.

‘It has been important for us not to hide something and just to be ourselves. To show people, that is how it should be. That’s how we want the world to be. We want people to be themselves and that’s how we want to be as well.’

‘I didn’t know there was a photographer there, so I didn’t even know about the photo,’ Harder later said. ‘It was just a quick kiss after a match, like we’d done other times after other matches. 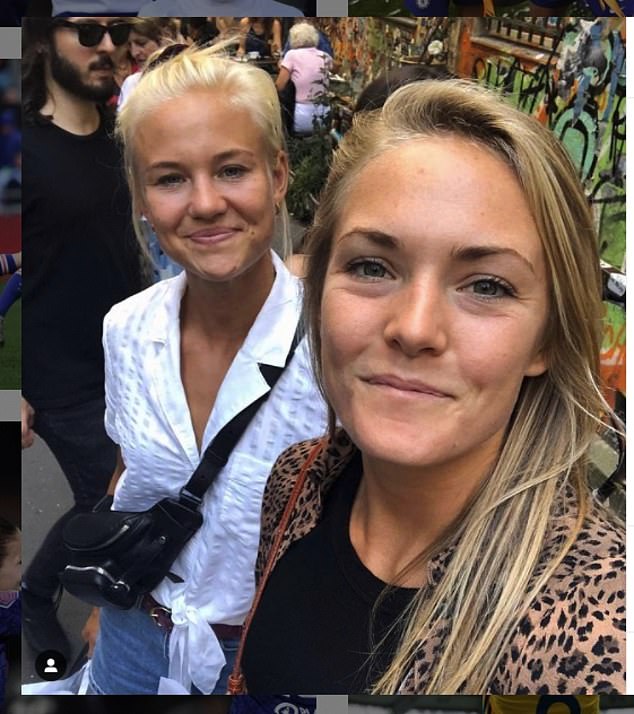 ‘This time there was a camera and one thing led to another, the photo appeared on social media and there were loads of comments, the majority very positive.

‘It made us realise that we are role models, not just in football but in other ways. It is something we have accepted because we know we are lucky to feel safe and relaxed being in a relationship which is public knowledge.

‘If we can help other people to be themselves, we want to do so.’ In the latest example of the pair embracing their profile, they released a short film entitled ‘Love Always Wins’ in March.

Eriksson’s Sweden team-mate Kosovare Asllani also feels like she is a role model, but for very different reasons as one of the few Albanian footballers at the top level of the women’s game.

She is the daughter of Kosovan migrants who emigrated to Sweden, and Asllani has been keen to ensure she remembers her family roots.

Her first name – literally meaning ‘girl from Kosovo’ – is an example of that while she has a tattoo of the double-headed black eagle of Albania on her ankle. It has helped her become the poster girl for Sweden’s immigrant communities. 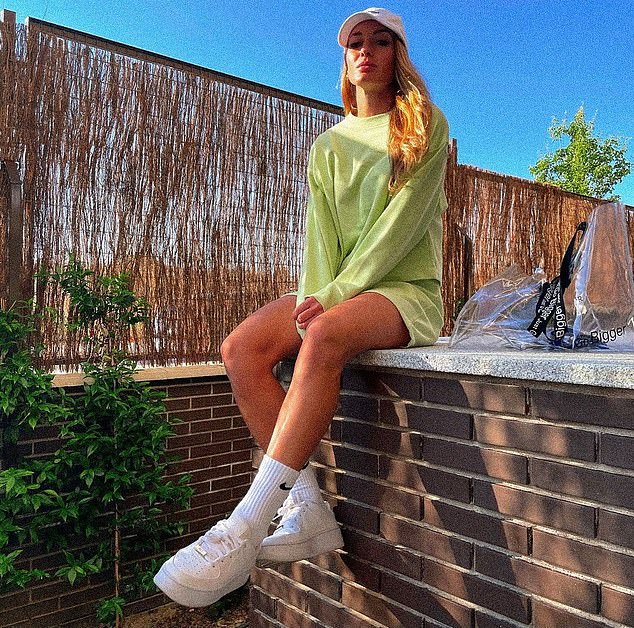 ‘I definitely feel like a role model,’ she told Morning Star Online in 2017. ‘I get a lot of messages. My parents tell me young people really look up to me because I’m one of the few Albanian footballers in the women’s game that reached the top level.

‘I was born in Sweden, but at the same time I’m really proud of my heritage, that my parents are born and raised in Kosovo, I’m both Albanian and Swedish.

‘I grew up with a family that have shown me how people in Kosovo listen to Albanian music. I love it. We’re not a bad country.’

Blackstenius started playing football with her older brother Oscar in a team her father Magnus managed, and it was not until she turned 15 that she decided to football was the career she wanted to pursue. 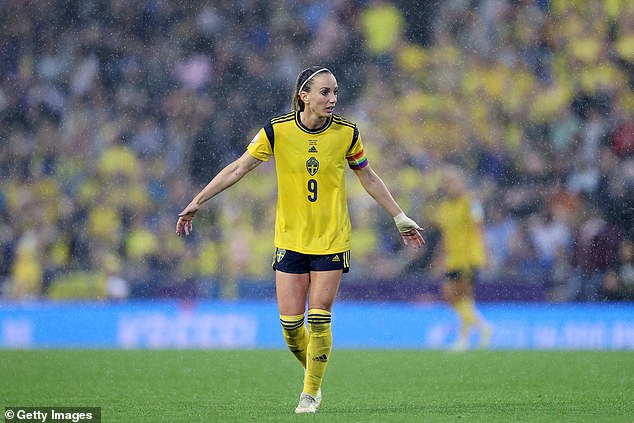 Blackstenius is a pacy and skilful forward with an eye for goal, though she has had a number of strikes ruled out for marginal offsides.

There are also threats from midfield. Manchester City’s Filippa Angeldahl was on the scoresheet twice against Portugal while Everton’s Hanna Bennison scored a stunning strike in the victory over Switzerland. Bennison helped change the game in Sweden’s narrow victory over Belgium and could be a potential match-winner.

Sweden manager Peter Gerhardsson is the man bringing it all together after a diverse career in the game.

After scoring 70 goals during his professional career, his coaching journey began as a PE teacher at a football school for high-school students

After that, he was recruited to coach the Sweden national team at various youth levels, before chances arrived to be an assistant coach in both the men’s and women’s game.

Eventually, he became the head coach of BK Hacken in the Swedish men’s top flight league, before taking the women’s national team coach role in 2017, leading them to third place at the World Cup three years ago. 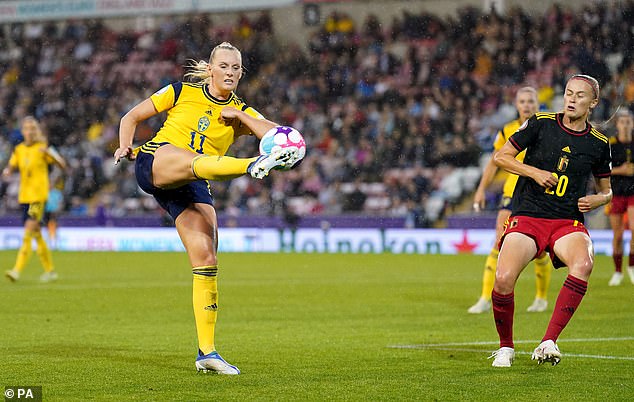 Now he believes his squad’s experience of the WSL will help them to overcome the Lionesses on Tuesday night.

‘I think we are very difficult to beat physically,’ Gerhardsson said after his side’s quarter-final win over Belgium,

‘We also have some players in our squad who play in England at club level so they know what it’s about. That experience is going to be very important.

‘They know what they are going to meet because they play them regularly in the league. For me, that experience will be very important.’

Barcelona forward Fridonlina Rolfo, who can also play as an attacking left-wing back, is another threat England must be wary of and she may look to target England’s right flank should Lucy Bronze get drawn out of position.

But Bronze, who will join up with Rolfo at Barcelona next season, is well aware of the forward’s strengths. 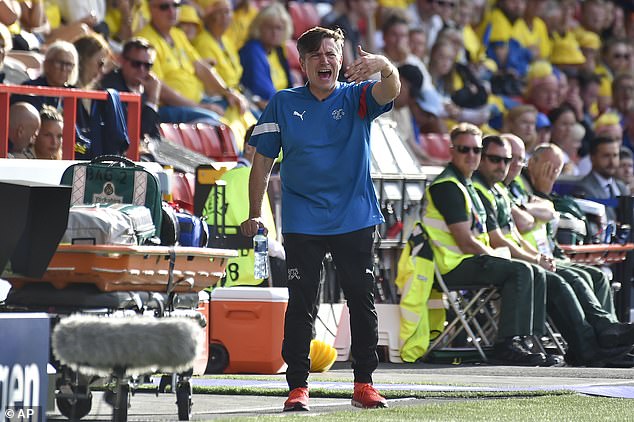 ‘I think she scored and assisted in over 15 goals or assists throughout the season,’ Bronze said.

‘I do know my stats and I do know a lot about her, probably more than some of the people watching the tournament. [She’s] a player that’s capable of playing left back so well and being able to play left wing, she’s going to be a threat both in attack and defence, which is not always the nicest wingers to play up against when they actually know how to defend properly.

‘It’s a player I’ve played up against many times. Previously when we were both Lyon and Wolfsburg, we had kind of a little battle on the side a few times. I’m excited to play against her and then also play with her in a couple of weeks time as well.’ 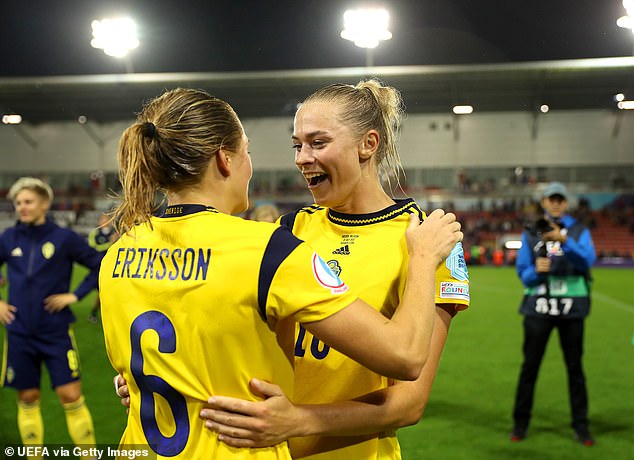 Barcelona forward Fridonlina Rolfo, who can also play as an attacking left-wing back, is another threat