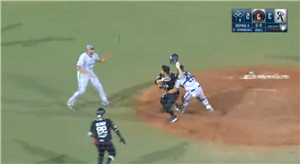 Baseball’s a team sport — even when you’re fighting your opponents.

A Mexican Baseball League player was so enraged after a fastball hit him on Wednesday that he went after the pitcher with his bat and helmet before an all-out brawl erupted all over the field.

During a game between Toros de Tijuana and Rieleros de Aguascalientes in Tijuana, Toros catcher Gabriel Gutierrez threw his bat and helmet at Rieleros pitcher Brandon Quintero during the eighth inning.

Tensions had been high between the two teams throughout the game. When Quintero’s pitch hit Gutierrez, it was the breaking point — and all hell broke loose.

Both teams’ benches cleared and players, coaches and umpires alike were caught into a large huddle as opposing players began to punch one another.

After a few minutes, the teams were separated. Three players were ejected from the game and play resumed — the Toros won 5-3.

Tijuana player Leandro Castro blamed the entire fight on the Rieleros, claiming it was because they were still mad about the results of their last game.

“I hope this does not continue to happen, I think they have something personal against us after the game in which we had 22 runs,” he said in Spanish.

The teams play again on Thursday, with the potential for more shenanigans.