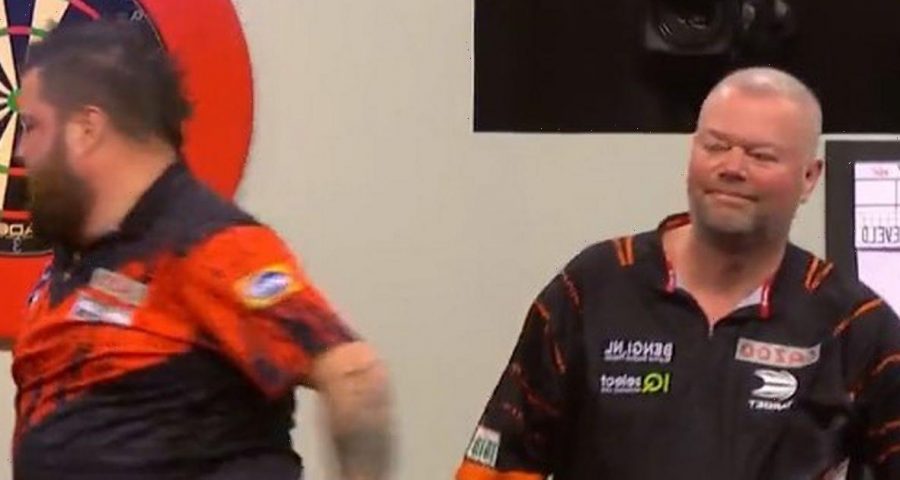 Raymond van Barneveld’s fairytale run at the Grand Slam of Darts was finally ended by Michael Smith following a thrilling semi-final in Wolverhampton.

Smith stormed into a 5-0 lead but a rejuvenated Van Barneveld, who has shocked the darting world by reaching the last four and beating world number one Gerwyn Price twice in the tournament, fought back brilliantly to level.

Van Barneveld never actually took the lead with Smith edging one leg ahead on several occasions. Bully Boy finally stretched away in the closing stages to win 16-12.

The tension was clearly getting to Smith, who is looking to clinch his first major tournament victory after losing in all eight of his finals. At one stage, he appeared to shout “stop it” as he collected his darts after one visit.

And after hitting the winning dart, Smith celebrated in slightly angry fashion and pointed to his head. It also took a while for the players to shake hands but they eventually embraced, with Van Barneveld raising Smith’s hand into the air.

“My doubles were shocking again, my scoring was unreal,” said Smith, who will face Luke Humphries or Nathan Aspinall in Sunday night's final.

“Stop missing doubles is the message to myself. I’m in the final now and I’ve got another chance. We’ll see how it goes.”

Who will win the Grand Slam of Darts? Tell us in the comments section below.

On his animated behaviour during the match, he added: “I was getting frustrated with myself with how things were going. I gave it large too many times and my throat’s a bit sore now.

“But that was a match where I needed to come out of my shell and be like I was when I was 18 or 19. I’ve been so quiet for so long, I had to do it. I had to do something to get myself hyped up for the game.”

On the hint of tension with Van Barneveld, Smith said: “It was a bit of heat of the moment. After the game, he said ‘well done and hope you win’.

“He plays to the crowd, fair play to him, but I’m here for one thing and one thing only – and it’s not to make friends, it’s about winning for me.”