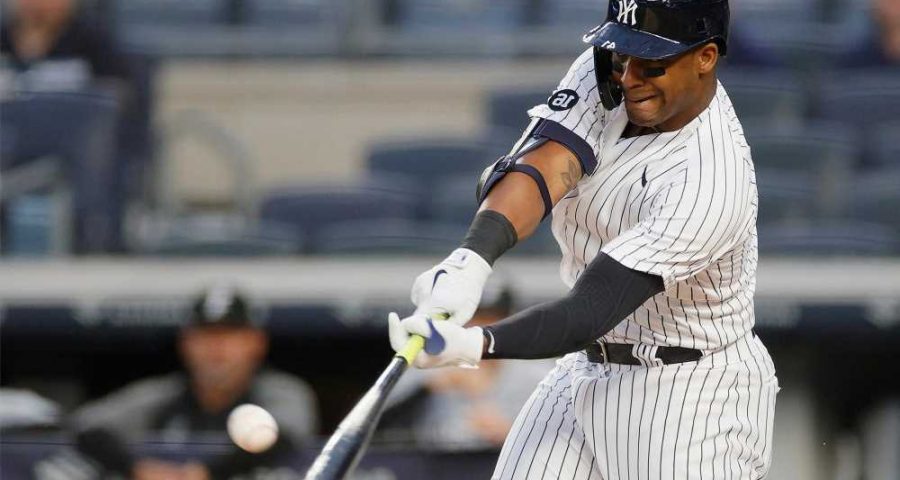 Yankees’ weak link needs to get it together: Sherman

Breakfast with stars became routine for pair of old pals

There is no way Yankees star returns this season: ‘It can’t happen’

Miguel Andujar’s bat is suddenly making it tough to keep him out of the Yankees’ lineup, even if his play in left field remains a work in progress.

After drilling an RBI double to the gap in the Yankees’ 7-0 win over the White Sox on Saturday afternoon, Andujar is now batting 9-for-30 over his past eight games as he tries to take advantage of his opportunity.

“Feel like he’s having some quality at-bats for us,” manager Aaron Boone said. “Hopefully, just with some regular opportunities here, he’s starting to find some traction a little bit. We know what he’s capable of with the bat.”

Because of injuries to Aaron Hicks (wrist) and Clint Frazier (neck), Andujar started his seventh game in left field Saturday out of the Yankees’ past eight games.

A day after being charged with an error while getting in the way of Brett Gardner making a catch, Andujar had a tough time tracking down a fly ball to the gap from Nick Madrigal in the eighth inning. It went for a triple, which Justin Wilson pitched around to keep the shutout intact.

“I think Miggy’s moving well out there,” Boone said. “That’s a tough chance. That ball’s 395 feet away [from home plate], going away in the gap. … It probably carried better than he thought and as a result he drifted on it. But I feel like he’s playing well out there and continuing to make a lot of strides out there.”

Frazier, who is dealing with a stiff neck, did enter the game in the eighth inning as a pinch-hitter, his first action since Monday.

Brett Gardner, starting in center field for Hicks, had two singles and is now batting 8-for-21 over his past six games.

“I feel good. I feel more comfortable [in center] than I do in left, to be honest,” Gardner said. “It’s just a matter of continuing to work, put myself in a good position to go out and contribute and try my best to stay healthy.

Luis Severino (Tommy John surgery) threw another simulated game on Wednesday, which drew “glowing” reports, according to Boone, and is “getting close” to pitching in live games.

After three weeks of being shut down with a right rotator cuff strain, Darren O’Day played catch for the first time Saturday. It marked the start of a throwing program that could have him back on the mound in games by mid-to-late June.

Boone gave DJ LeMahieu the day off, so Luke Voit led off for the fourth time in his career and went 1-for-4 with a walk.

While pitching coach Matt Blake and first base coach Reggie Willits returned to the Yankees on Friday from their breakthrough COVID-19 cases, third base coach Phil Nevin remained in quarantine. Boone said Nevin is “doing well,” but still testing positive and experiencing enough symptoms “in and out” to keep him away from the team.