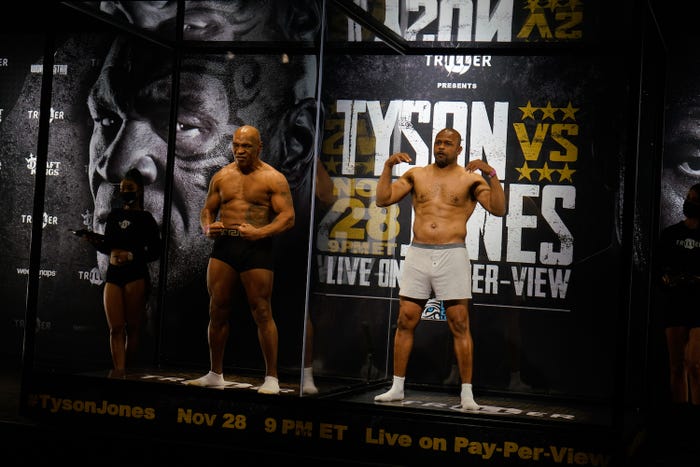 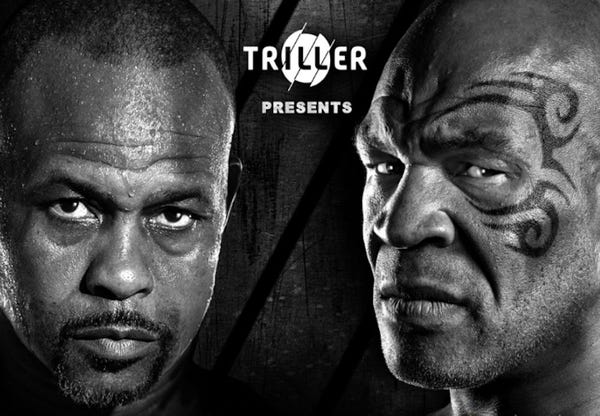 The heavyweight exhibition tops a card which has been organized by Triller and Tyson's League of Legends.

Here is the four-bout main card in full:

Jake Paul, a YouTube creator, takes part in his second fight of the year and competes against the former NBA player Nate Robinson. 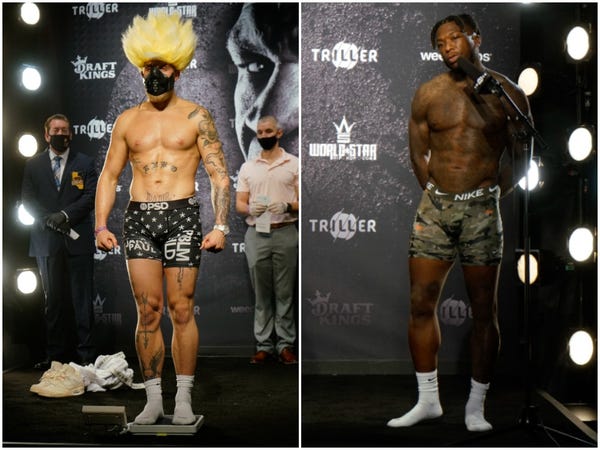 Robinson told Insider recently that Paul had been causing chaos at media events during the build-up to Saturday's showdown, and blasted the "a–hole" as unprofessional.

The fight between Paul and Robinson serves as the co-feature of the night. The YouTuber weighed 189-pounds, outweighing Robinson by eight pounds. 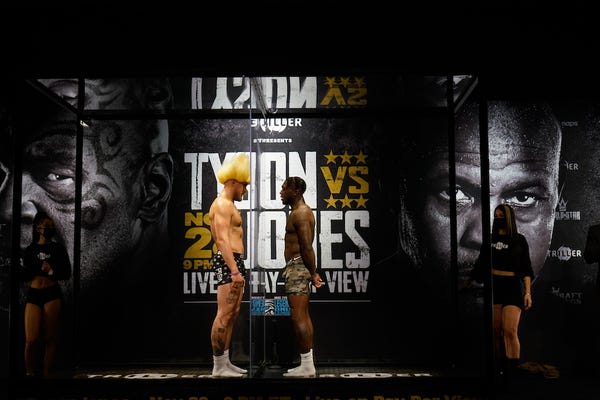 Jake Paul also spoke to Insider this week and told his critics that he's in boxing to stay, vowed to knock out Nate Robinson in a single round, and is challenging big-name UFC fighters like Ben Askren, Jorge Masvidal, and Conor McGregor to fight him using boxing rules.

Both cruiserweights appeared to be fighting fit, even though Robinson had told Insider that it was a struggle at first to get used to a different kind of fitness boxing requires when compared to basketball. 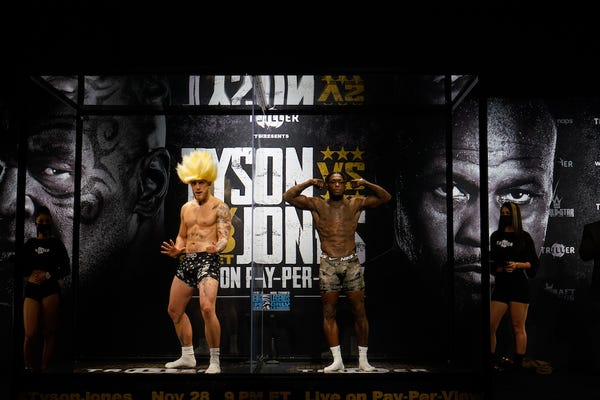 Watch Paul face-off with Robinson below. It's the final time they'll see each other before Saturday's opening bell.

Roy Jones Jr., a former four-weight boxing champion who had retired after a grueling 75-fight career in 2018, weighed 210-pounds Friday. 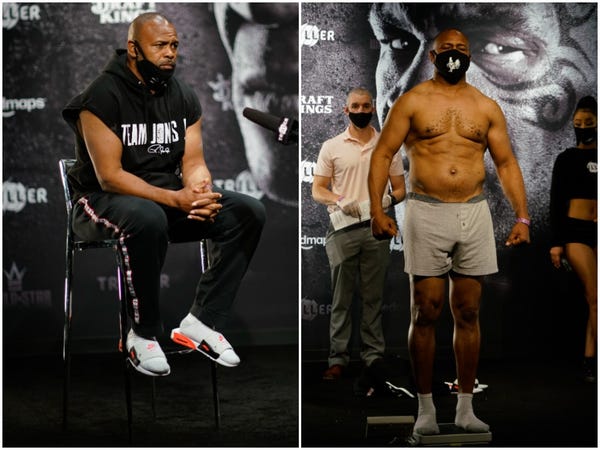 Though Jones was a massively-accomplished boxer who was considered one of the most athletic and technically-graceful fighters of all time in the 1990s, he said in previous months that he was beginning to regret signing a deal to fight Tyson in an exhibition.

"He's still one of the strongest, most explosive people who ever touched a boxing ring. If anything, I made a mistake going in with him. He's the bigger guy. He's the explosive guy."

Then came Mike Tyson who weighed 220.4-pounds on Friday — the lightest he's weighed in boxing since 1996. 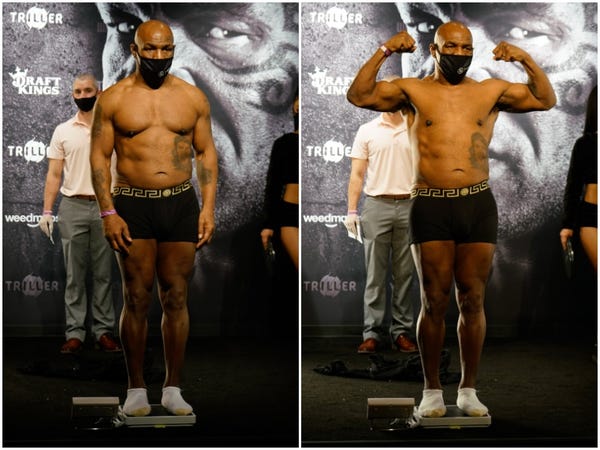 The event is overseen by the California State Athletic Commission (CSAC).

Andy Foster, a CSAC executive, said he didn't want to mislead anybody, that it's not a real fight, and knockouts are discouraged.

This is at odds with the event organizers, Triller, who appear to have been at loggerheads behind-the-scenes with CSAC.

"There could be a knockout and there will be one winner," Triller co-owner Ryan Kavanaugh said in a statement sent to Insider.

This was Mike Tyson's first face-off for almost a decade and a half. 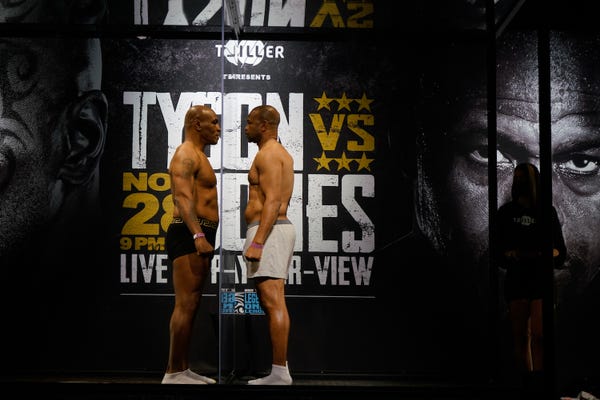 The event has polarized the boxing community, with Frank Warren, who is one of Britain's top promoters, calling the event "sad" because "boxing is a young man's game."

Neither fighter cares about the criticism the exhibition has received, and appear as ready as any former athletes in their 50s will be to throw hands come Saturday. 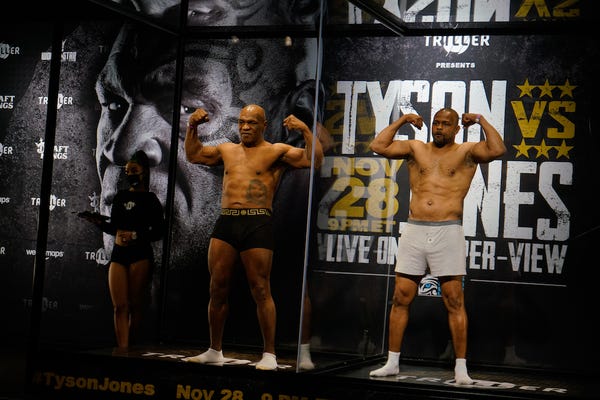 Watch the Tyson and Jones face-off below.