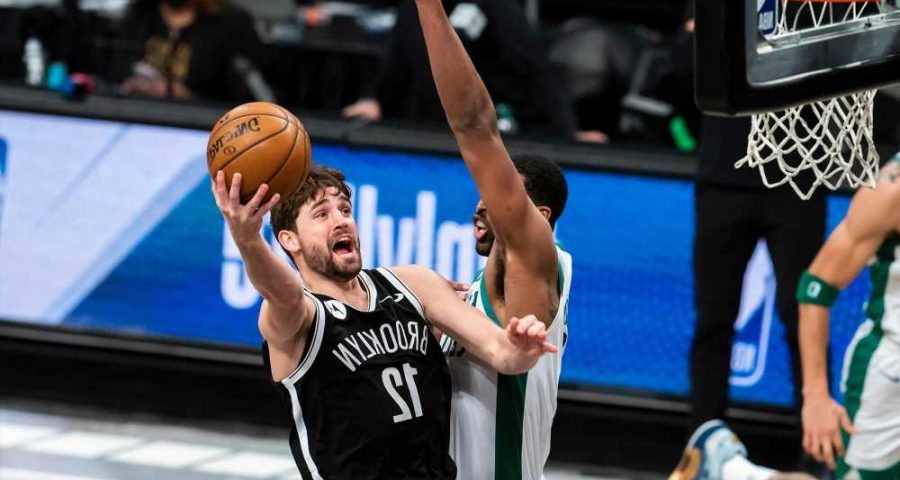 The Nets weren’t the only undermanned squad on the floor Friday night, but they’ve been doing it as long and as well as any team in the NBA all season.

Despite playing just seven of 60 games this season with the assembled Big 3 in the lineup together, the Nets became the first team in the Eastern Conference to post 40 wins this season with a 109-104 victory over the Celtics at Barclays Center.

Kyrie Irving endured an off shooting night (4-for-19) but finished with 15 points, 11 assists, nine rebounds and four steals as the Nets (40-20) took over the top spot in the East by a half-game from the 76ers despite the continued injury absences of James Harden (hamstring) and Kevin Durant (thigh).

EuroLeague import Michael James, the 27th player to appear in a game for the injury-riddled Nets this season after he signed a 10-day contract earlier Friday, scored eight points in 21 minutes in his debut for the team.

Jayson Tatum netted a game-high 38 points and Payton Pritchard scored 22 for the Celtics (32-28), who also were playing without two of their top three scorers, Jaylen Brown and Kemba Walker.

The Nets led by as many as 17 early in the fourth quarter, but 3-pointers by Tatum and Pritchard completed an 11-0 Boston surge that slashed the lead to 98-95 with 3:31 remaining. However, Harris’ fourth make from beyond the arc and a transition dunk by Green replenished the lead to eight barely a minute later.

Durant had been upgraded to questionable to play Friday, but he missed his third straight game with a left thigh contusion. There still is a possibility the 11-time All-Star could return for Sunday’s home game against the Suns. The Nets also were without James Harden, who hasn’t played since April 5 due to a hamstring issue.

Durant’s latest injury absence stems from kneed in the leg by Miami forward Trevor Ariza barely four minutes into last Sunday’s game against the Heat, his fifth appearance after missing 23 consecutive games with a hamstring strain.

After signing with the Nets as a free agent, Durant sat out all of last season following Achilles surgery in June 2019, while he was with the Warriors. He also missed multiple games earlier this year due to the NBA’s COVID-19 health and safety protocols.

“I think he’s close, but I don’t think he’s there,” Nets coach Steve Nash said before Friday’s game. “So I think we’ll see [Saturday] and Sunday, if that’s a possibility.”

The Celtics also were not exactly 100 percent healthy, missing Brown for a second straight game with a shoulder issue, while Walker was out for knee maintenance.

“The Celtics are obviously an experienced team. They’ve had deep playoff runs and continuity,” Nash said beforehand. “Jayson Tatum is an incredible player who makes it very difficult on any defense.”

Tatum nailed five 3-pointers and netted 25 points to keep the Celtics within nine points at halftime.

The Nets shot just 7-for-21 in the first quarter and trailed 25-21, but Brown sparked a 12-3 run to open the second with seven of his nine points in the half.

James buried his first from long distance midway through the quarter, and a couple of dunks by Griffin — off a lob pass from Irving — and Landry Shamet in transition pushed the Nets’ advantage to 14 with just under three minutes to play.

Tatum pumped in eight more points before the end of the period, including a three from the left corner with 3.4 seconds remaining for a 60-51 game heading into intermission.

The Celtics drew within six on Marcus Smart’s 3-pointer in the third, but Harris netted eight points in a 10-0 run, including a pair from long range as the Nets carried an 88-73 lead into the final quarter.