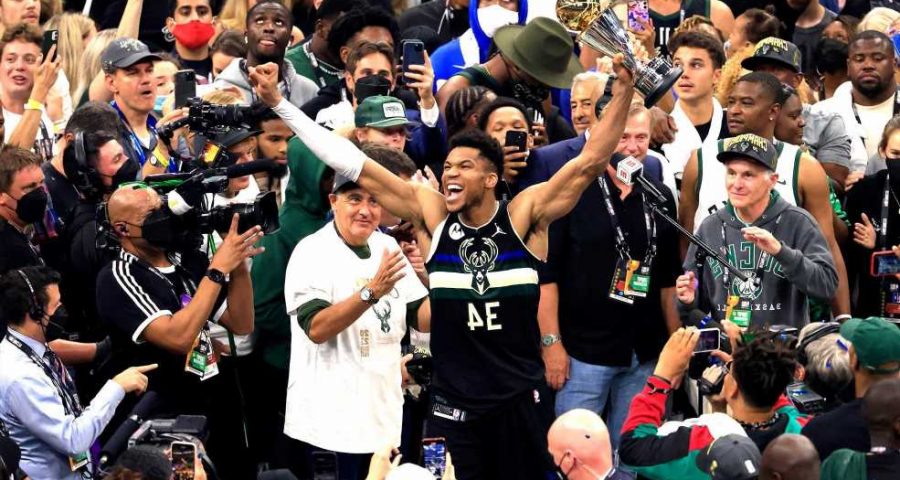 Giannis Antetokounmpo will never be forgotten after this

Giannis Antetokounmpo isn't the type of star you can root against

This is a start for the Yankees

We are Mighty Metropolis. We are Godly Gotham. We have tasted the canvas a few times lately, New York City has, but in a sporting solar system divided into haves and have-nots, big markets and small, we are still the haughtiest have. We are the big market; everywhere else is Altoona.

When it comes to sports, we lead with the ATM.

That is still our first fallback, right? It is a part of our DNA, our muscle memory. In its way, it’s like that scene in “Goodfellas” where Henry Hill explains how Paulie “runs” a restaurant that he’s really just looking to bust out.

Injuries got you down? “Flip you, pay me!”

A little short on the offensive line? “Flip you, pay me!”

Chris Paul wants to talk? “Flip you, pay me!”

Ah, but then we see a love affair from a distance like the one between Giannis Antetokounmpo and the city of Milwaukee.

We see the mutual affinity. In the hours since the Bucks won the NBA title, we’ve heard chapters of Antetokounmpo’s origin story in the league, the best of which centers on his rookie year when he’d gone to a Western Union office, sent his whole paycheck home to his family in Greece, then realized he didn’t keep any cash for himself for cab fare. There was a game that night. The arena was 2 miles away. So 19-year-old Giannis did the only thing he could do.

He started to run to work.

About a mile in, he passed a Honda Fit driven by a couple of Bucks fans. He was recognized, even though he wasn’t yet the global superstar he is now, just a gawky, skinny 6-foot-10 kid playing for the local squad. The couple offered him a ride. He accepted.

Those are the kinds of stories you get in sports when players find homes in strange cities as raw kids, learn to fall in love with those towns, commit to being part of the fabric of the common good. Homegrown stories are rarer and rarer in sports, because the business end often forbids such all-in, long-term marriages. Players get itchy. GMs grow impatient.

And look: There isn’t one Yankees fan who will ever seek to throw out the 1977 and ’78 championships, teams that were dubbed in real time “The Best Team Money Could Buy,” teams that featured exactly three regulars — Thurman Munson, Ron Guidry, Roy White — who were “homegrown.” If the Nets survive next year’s playoff phalanx, or the year after, they will be recognized as “champions” first, “mercenaries” after.

But we know, even from a distance, what Milwaukee is feeling. We have been there. We have seen Walt Frazier, Bill Bradley and Willis Reed play for the Knicks, and the Knicks alone, and hang two banners; we also saw Patrick Ewing scuffle fruitlessly for 16 years, looking for similar satisfaction.

We have seen the Rangers come achingly close with the beloved home-grown grouping of Jean Ratelle, Vic Hatfield, Rod Gilbert and Brad Park — and then finally crash the Canyon of Heroes thanks to a core of Mike Richter, Brian Leetch and Sergei Zubov (with, sure, helping hands from a couple of notable outsiders). And the Islanders once delivered four Cups to Borelli’s on the shoulders of Bryan Trottier, Mike Bossy, Billy Smith, Bobby Nystrom, Denis Potvin and many, many others.

We saw every snap Eli Manning and Phil Simms ever took. We saw every sack Lawrence Taylor and Michael Strahan ever made. Joe Namath and Gerry Philbin anchored the ’68 Jets; neither had played a down anywhere else when they stunned the NFL on Jan. 12, 1969. The ’69 Mets might have been miracle workers but most of the important names — Seaver, Koosman, Jones, Swoboda, Harrelson, McGraw, Kranepool — had only known Shea Stadium as their professional home.

And, of course, there is the Yankees’ Core Four, perhaps the platinum version of this, a grouping (Derek Jeter, Andy Pettitte, Mariano Rivera, Jorge Posada) that really should be re-dubbed the Fab Five to include Bernie Williams, even if he missed the last dance in 2009.

Yes, for all its financial ferocity New York really can feel like Starkville with a Skyline, an overgrown small town that loves its own the way Milwaukee loves Giannis right now. It’s why we sit on tenterhooks now, wondering which of Our Guys will fill that role.

It’s seemed like Aaron Judge and Gary Sanchez have had that gate open forever, even if it’s only been since 2017. A perfect Mets season would finish with Jacob deGrom throwing the final pitch, and Michael Conforto driving in Brandon Nimmo with the winning run. Can Daniel Wilson — or is that Zach Jones — be the new Joe Eli Simms for football New York?

Antetokounmpo was an ordinary player at 19 and a champion by 26. Can a Knicks neophyte like RJ Barrett, who’s upward two-year arc traces similarly, duplicate that? How about Barrett’s corporate colleague Alexis Lafrenière of the Rangers?

That’s half the fun of it, after all, seeing forever icons develop before your eyes. Deep pockets are nice, too. But they’ll never replace deep-seeded bonds, right? Ask Milwaukee. Better still: Ask yourself.