RAFA BENITEZ wants to join the race for Juan Mata — if he stays on as Newcastle boss.

Mata, 31, is out of contract at Manchester United and could leave on a free this summer. 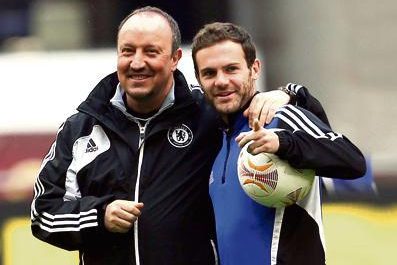 SunSport understands Benitez is keen on a reunion with his former Chelsea playmaker. But he would need Toon chiefs to go against club policy to sign him.

One sticking point in talks has been their recruitment strategy and wage structure.

Benitez has asked the club to be more open-minded about signing players older than 26 and to start paying more competitive salaries.

So any pursuit of Mata, who earns around £140,000 a week at Old Trafford, would be an early test of whether or not Benitez has got his own way.

Benitez worked with fellow Spaniard Mata when he managed Chelsea during the 2012-13 season and thinks his creativity, personality and experience could be perfect for Newcastle.

But should Mata leave Old Trafford after five years, he will have a host of offers.

Teams in La Liga, including his former club Valencia, are already circling.

Benitez is also going into battle with the Toon board to sign another oldie, West Brom striker Salomon Rondon, who turns 30 in September.

Rondon is available for £16.5million but the Toon’s hierarchy are again being put off by his age and wages — and Wolves and West Ham are now poised to pounce.