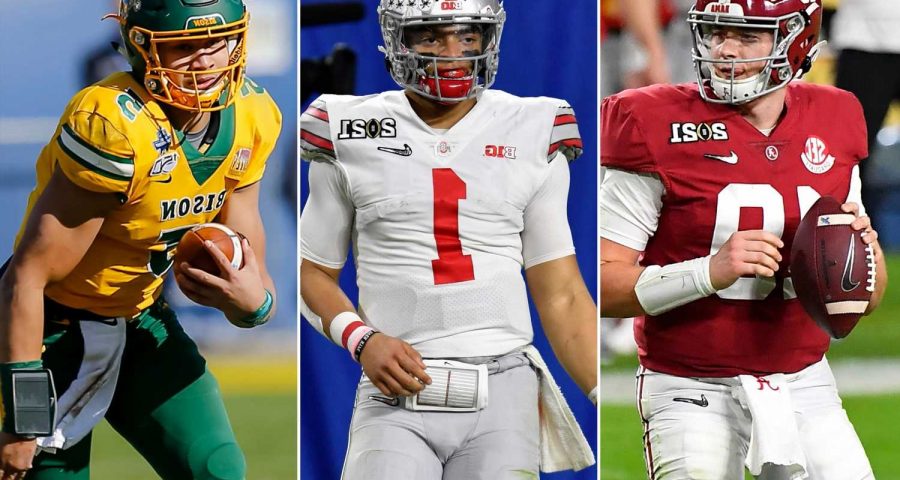 The Serby Mock 5.0 (the editors refused my repeated pleas to run it on Friday) would like to give a special thanks to Kyle Shanahan for making every mocker’s life miserable.

The entire first round this time, and for the fifth consecutive time, the Jets get Zach Wilson, followed this time by a talented cornerback, while the Giants get Joe Judge and Patrick Graham a pass rusher.

No trades once again.

No one is more excited than Urban Meyer — or my nephew, Justin Baldinger, their new director of corporate partnerships.

How can they pass on Penei Sewell? Only because Joe Burrow can pass again to his elite college Go-To Guy and, fingers crossed, right tackle Riley Reiff can keep the franchise quarterback from getting his knee wrecked again.

The kneecap-biter at a position of need for Dan Campbell, no change from Mock 4.0.

Big-ticket signing Ja’Wuan James made three starts at right tackle in 2019 and opted out in 2020. How can Vic Fangio trust him? No need to go QB following trade for Teddy Bridgewater.

A Crimson Tide reunion opposite Trevon Diggs to help with Kenny Golladay in the division.

Leonard Williams needs more help rushing the passer, and former GM and Dave Gettleman crony Ernie Accorsi always subscribed to the You Draft Pass Rushers ‘Til The Cows Come Home theory. The Eagles were hot for him…Paye, not Gettleman.

They’ll get the left tackle for Justin Herbert with the 47th pick, and remember, they play Patrick Mahomes twice.

A safe plug-and-play inside or outside to clear a path for Dalvin Cook.

The Hoodie has all the intel from Nick Saban, and adds the Heisman winner even after signing Nelson Agholor and Kendrick Bourne. Will Dollar Bill trade up for a QB or is a reunion with Jimmy Garoppolo imminent?

A 6-4, 260-pounder likened to a young Brian Urlacher to roam alongside Isaiah Simmons and behind JJ Watt.

Is he a linebacker or a safety? Brian Flores doesn’t care. He’s a fearless football player with instincts.

Ron Rivera can afford to let him sit behind Ryan Fitzpatrick for a while.

He can step in at right tackle and replace Charles Leno as the left tackle of the future.

Justin Houston is a free agent and he’s 32, although GM Chris Ballard needs a left tackle to replace retired Anthony Castonzo in front of Carson Wentz.

A nasty mauler to replace 2020 first-round bust Isaiah Wilson on the right side won’t make it easier on defenders against Derrick Henry.

James Conner is in Arizona, and Big Ben cannot be asked to throw 608 passes anymore.

If anyone has the job security to roll the dice on the draft’s best pass rusher with a concussion history, it’s Meyer.

A slot receiver with 4.39 speed gives Baker Mayfield a UFO once Odell Beckham Jr. and Jarvis Landry are gone.

Tell me how Sean Payton can resist the temptation of a new toy with 4.32 speed for Jameis Winston and Taysom Hill.

A size-speed specimen to replace Matthew Judon, and for Wink Martindale to develop quickly.

Ndamukong Suh and Steve McLendon are long in the tooth.