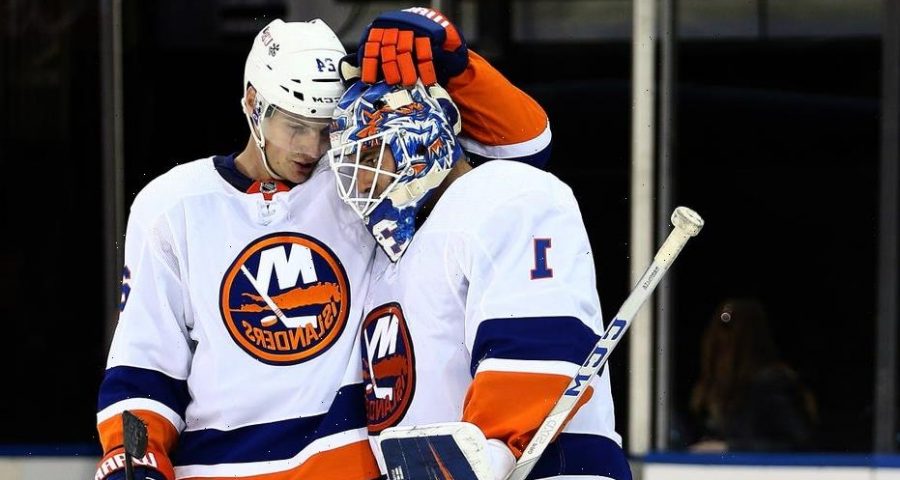 The NHL 2021-22 season kicks off Tuesday with a full 82-game schedule set to run until April 29. This year 32 teams, with the addition of the Seattle Kraken, will battle it out with the hopes of hoisting the coveted Stanley Cup in what will be the first regular season since the pandemic struck midseason in March 2020.

The league is split into two conferences — the Eastern and Western conferences — and returns to its original four divisions: the Atlantic, Metropolitan, Central and Pacific, with eight teams in each. 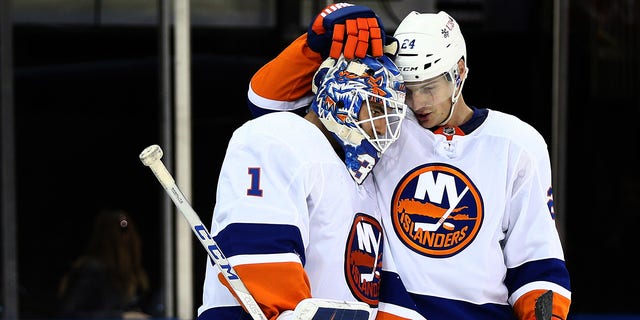 The Metropolitan Division is filled with playoff contenders, but the most consistent force over the past few seasons has been the New York Islanders.

The Islanders finished fourth in the East Division last season with a 32-17-7 record and made the playoffs for the third straight season — no coincidence that coincides with Barry Trotz’s time as head coach. After defeating the division champion Penguins, the Islanders would power past the Bruins and be eliminated by the eventual Stanley Cup champions in the Eastern Conference Finals.

The Islanders’ playoff chances look solid again. Lead scorer Mathew Barzal will be joined by Anders Lee, who is returning from a knee injury that sidelined him the final two months of the season. Offseason moves added veteran Zdeno Chara and Zach Parise to the lineup, but the departure of Jordan Eberle, who was selected by the Kraken in the expansion draft, will likely be a noticeable change in the lineup. 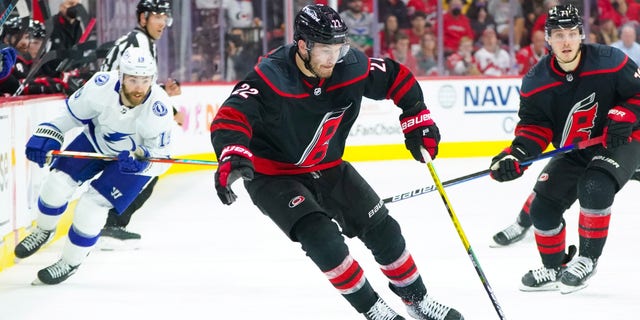 Carolina Hurricanes defenseman Brett Pesce (22) skates with the puck against the Tampa Bay Lightning in game two of the second round of the 2021 Stanley Cup Playoffs June 1, 2021, at PNC Arena in Raleigh, N.C.
(James Guillory-USA TODAY Sports)

The Canes proved themselves as serious contenders last season after finishing top in the Central Division before being eliminated by the Lightning in the second, round but a busy offseason shows the organization’s determination to keep the ball rolling.

The biggest hurdle to overcome for the Canes will be the departure of Dougie Hamilton, who scored 42 points last season. 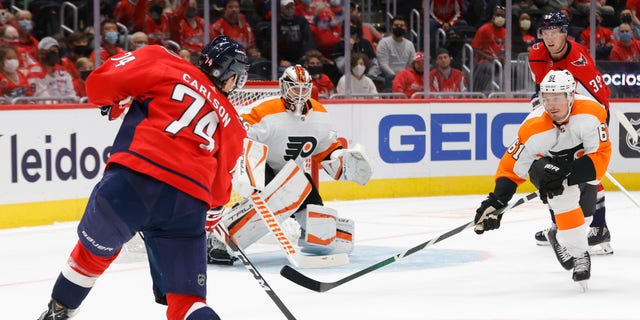 The Capitals made no significant moves in the offseason, but why fix what isn’t broken? Washington stands as one of the biggest threats in the Metropolitan, having captured 13 division titles — five of which were back to back from 2015-2020.

The Caps finished second in their division last season but would get eliminated by the Bruins in the first round. Any hope of shaking off last year’s woes took a massive blow during the offseason after top scorer Alex Ovechkin was injured during Washington’s final preseason game.

He suffered a lower-body injury that could sideline the 36-year-old for the season opener against the New York Rangers on Wednesday. In addition to his absence, the Capitals can likely expect to be without veteran Nicklas Backstrom to start the season as he heals from a hip injury from last season. 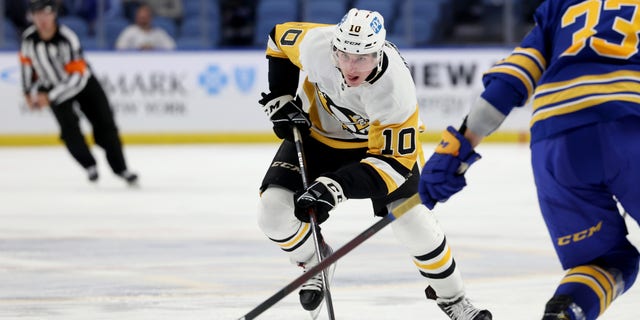 The Penguins find themselves in a similar position as the Capitals — perhaps worse. Pittsburgh will be without its top scorers Sidney Crosby and Evgeni Malkin for some time as both players recover from surgery.

Crosby is recovering from wrist surgery to repair a nagging injury and could miss the season opener on Tuesday against the Lightning. Malkin’s outlook is less appealing. He could miss at least the first two months of the season following surgery on his knee during the offseason.

Forwards Jake Guentzel, Jeff Carter and Bryan Rust will likely take the starting line to open the season with Carter stepping in for Malkin when Crosby returns.

The Penguins’ biggest challenge this season could be their goaltending situation after Tristan Jarry’s lackluster performance in the playoffs. 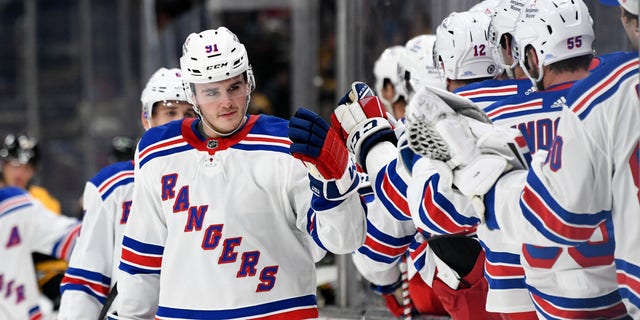 New York Rangers left wing Sammy Blais (91) celebrates with his teammates after scoring a goal against the Boston Bruins during the first period Oct. 2, 2021, at the TD Garden in Boston.
( Brian Fluharty-USA TODAY Sports)

The Rangers have long been stuck in the “rebuild” phase, but a busy offseason could lead to a much-needed breakthrough.

New York hosts one of the younger rosters in the league with forwards Alexis Lafreniere and Kaapo Kakko expected to see some serious ice time this season. The additions of veterans Barclay Goodrow and Ryan Reaves should offer some direction as well as an aggressive presence on a team that’s lacked true grit over the last few seasons.

The Rangers also avoided letting their biggest star walk away next season by signing Mika Zibanejad to an eight-year contract on Sunday. He joins Artemi Panarin and Chris Kreider as the team’s premier players.

Norris Trophy winner Adam Fox will also be a strong point for the Rangers’ defense, but New York’s success will all come down to one thing. Can this budding team adapt to new head coach Gerard Gallant in time to make the playoffs? 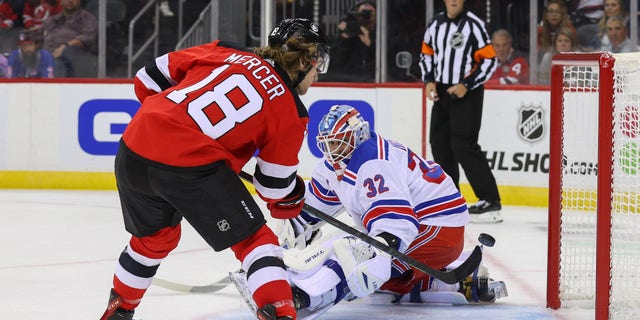 The Devils missed the playoffs for the third consecutive season after finishing seventh in the East Division, only ahead of the imploding Sabres.

Bottoming out with just 45 points after finishing 19-30-7, the Devils made a huge move in signing defenseman Dougie Hamilton to a monster seven-year, $63 million contract. The veteran promises a boost to the Devils struggling power play. He’s scored 104 power-play points in 607 NHL games, totaling 18 last season alone.

Hamilton will likely join Ryan Graves on the same line — another offseason addition.

In order to stand a chance against their division rivals, the Devils’ young forwards will have to create more scoring opportunities. They ranked 26th in the league last season with just 145 goals scored and fifth with goals allowed. 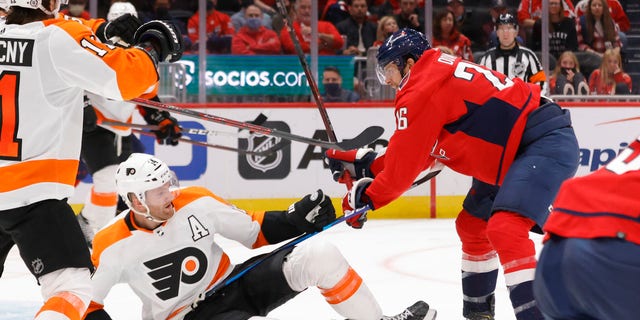 The Flyers did a major overhaul this offseason after finishing sixth in the division, missing the playoffs after making a second-round appearance in 2020. Following several first-round exits, the Flyers went on a signing spree in hopes of changing that.

Cam Atkinson, Derick Brassard, Ryan Ellis and Rasmus Ristolainen are among just a few additions the Flyers are hoping will have an immediate impact on the ice.

However, the Flyers may have missed the mark when it comes to the team’s biggest hole: goaltending.

Carter Hart finished at the bottom of the league with -22.57 goals saved above average and a save percentage of just .877. Despite the dismal performance, the club signed Hart to a three-year contract in August and added Martin Jones as a backup. 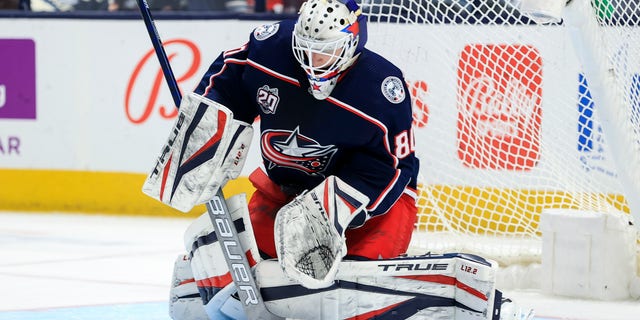 The Blue Jackets have been trending downward since their second-round exit in 2019, and this season, unfortunately, seems to be headed in the same direction.

Columbus finished at the bottom of the Central Division after going 18-26-12 in the regular season. It missed the playoffs entirely, and the Blue Jackets and head coach John Tortorella mutually agreed to part ways after six seasons. Brad Larsen, who previously served as the team’s longtime assistant coach, has taken ove,r which won’t be much of an adjustment for Columbus.

The Blue Jackets have a pretty significant hole in their top lines after the midseason trade of Pierre-Luc Dubois sent him to the Winnipeg Jets. Max Domi will make a return way ahead of schedule after undergoing surgery back in June to repair a shoulder injury — he was initially expected to miss at least six months.

The offseason trades of top defenseman Seth Jones and forward Cam Atkinson will also be notable absences, but the return of Jakub Voracek after nine seasons with the Flyers will hopefully create more scoring opportunities for Columbus.