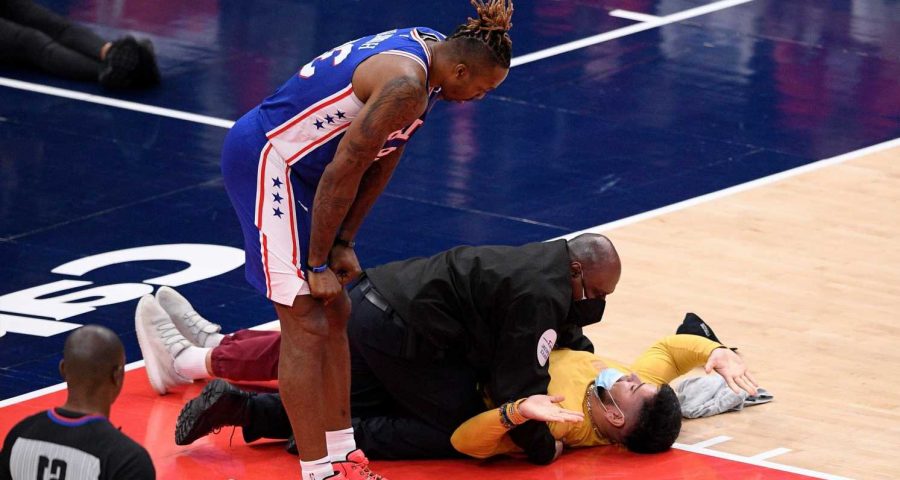 The COVID-19 pandemic has exposed so many of the fault lines in our society. Disparities in health care. Economic inequality. A lack of access to child care. A failure to take mental health issues seriously. The systemic racism that underpins everything.

And perhaps most disheartening of all, how little we think of one another.

The rash of abuse directed toward NBA player recently has been shocking, seeming to be a departure from the normal bounds of good behavior. But, really, it’s an extension of the disregard that’s been shown to flight attendants, store employees, public officials, even some of our ordinary, fellow Americans.

There is an ugliness in our interactions that should horrify and embarrass us, but is instead celebrated by a country where it is increasingly OK to do whatever you want and to hell with everyone else.

Philadelphia 76ers center Dwight Howard watches as a fan who ran onto the court is restrained by security personnel during the second half of Monday's game. (Photo: Nick Wass, AP)

“There’s great fans in Boston and New York and Philly and DC, Utah. But there’s some that just need to, you know what, stay home,” Wizards coach Scott Brooks said Monday night, after a fan ran onto the court during the third quarter of Game 4 between Washington and Philadelphia.

If only it were that easy.

EMERGING STARS: These 25-and-under NBA playoff studs serving notice that they've got next

One of the best qualities of America has always been the celebration of our differences. We are a melting pot, almost all of us tracing our roots to somewhere else, and those distinct cultures, traditions and histories only served to enrich our shared experiences.

We could disagree about politics, religion and whether LeBron James is the greatest NBA player ever or not even the best of his generation, yet still find common ground as Americans.

But it’s getting harder and harder to agree about anything. Even something as simple as wearing masks, our easiest way of preventing the spread of COVID-19, became weaponized. Rather than being a way to protect ourselves and show concern for our neighbors, they became a way to declare “freedom” – complete with obnoxious, sometimes abusive behavior to make a nonsensical point.

It is easy to blame this hostile and increasingly dangerous climate on former President Donald Trump, who delighted in demonizing his opponents and sowing division among Americans. His language and his actions have been blamed for the rise in hate crimes, particularly those directed at Blacks and, more recently, Asian-Americans.

But that lets the rest of us off too easily.

The polarization in this country, the demeaning of those who look, speak or love differently, has been growing for years, if not decades. Whether we have been active participants in this degrading of our society or haven’t said loudly enough that it’s wrong and won’t be tolerated, we all bear a responsibility for it.

Because whether we are willing to admit it or not, deep down, we know better.

We know, deep down, that none of this is acceptable. That we wouldn’t want ourselves or our loved ones subjected to similar behavior.

Saying that we would never behave this way is no longer enough. Neither is saying it’s all the fault of fill in the blank with whatever group you disagree with in that instance. It’s incumbent upon all of us to examine our own behavior and beliefs and, rather than looking for someone to blame, ask what we’re doing to make it better.

The abuse being heaped on NBA players isn’t happening in a vacuum. It’s a reflection of where we are as a society.

We do. But in order for that to happen, we have to be better. And it starts with each one of us.