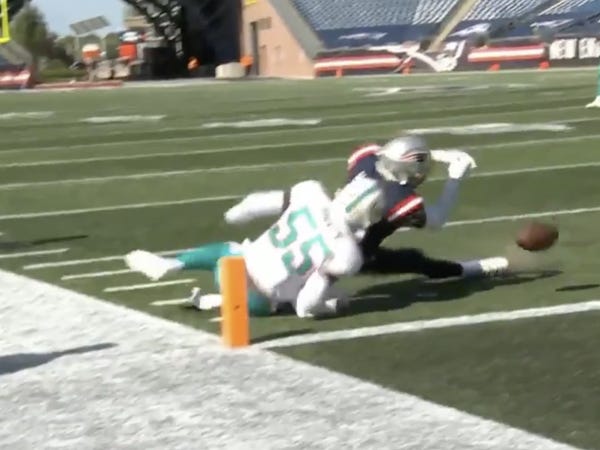 One of the most notorious rules in the NFL reared its ugly head on Sunday, when New England Patriots wide receiver N'Keal Harry fumbled the ball out of the end zone.

As the Patriots were threatening to extend their lead over the Miami Dolphins, Harry reached for the goal line but lost control of the ball. Harry's fumble bounced into the end zone and then out of bounds without either team gaining possession, resulting in a touch-back. The Dolphins took over possession at their own 20-yard line.

Harry's fumble highlighted one of the NFL's most frustrating rules: According to Section 38 of the NFL rule book, a touch-back occurs when "the ball is dead on or behind the goal line a team is defending, provided that the impetus comes from an opponent, and that it is not a touchdown or an incomplete pass."

In practice, this punishes teams for aggressively attempting to score. The rule seems like it was meant to pertain to kickoffs and punts, rather than to an offensive possession. But when a team fumbles out of the end zone, enforcers of NFL rules just have to roll with it, even though the rule may not have planned for such a contingency.

The rule previously came under close examination in Week 15 of the 2017 season, when the Raiders fumbled the ball out of the end zone in the waning seconds of their game against the Dallas Cowboys. Rather than scoring an electric game-winning touchdown, the Raiders instead conceded possession to the Cowboys, who would go on to end the game with a kneel-down.

There could be a simple solution to this problem: If a team fumbles the ball out of bounds, the rules should instead have that team retain possession with a fresh set of downs, and with the ball moved back to the 20-yard line. That would be an inverted touch-back — the ball would still return to the 20, but without a change of possession. The possessing team would still get some degree of punishment, but the defense would not be over-rewarded after a fluke play.

That change would be an easy fix. But unfortunately for the Patriots, the rule as it stands now meant that the Dolphins were rewarded with possession.