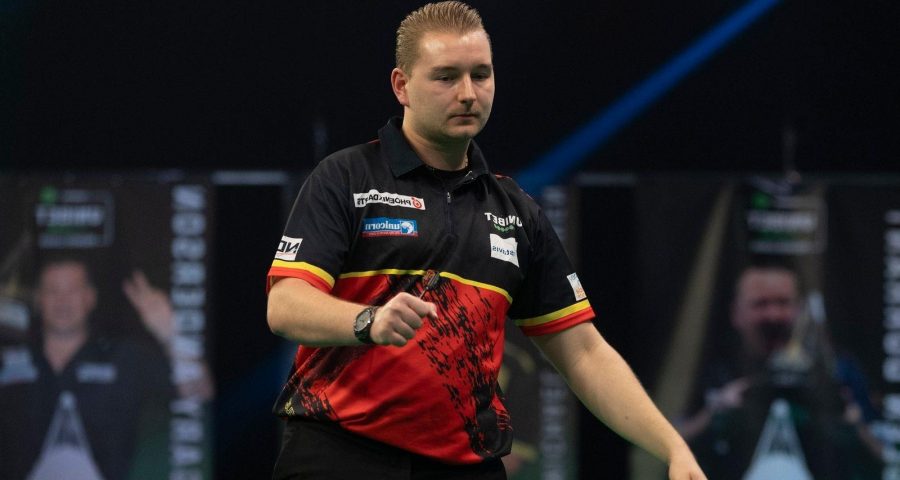 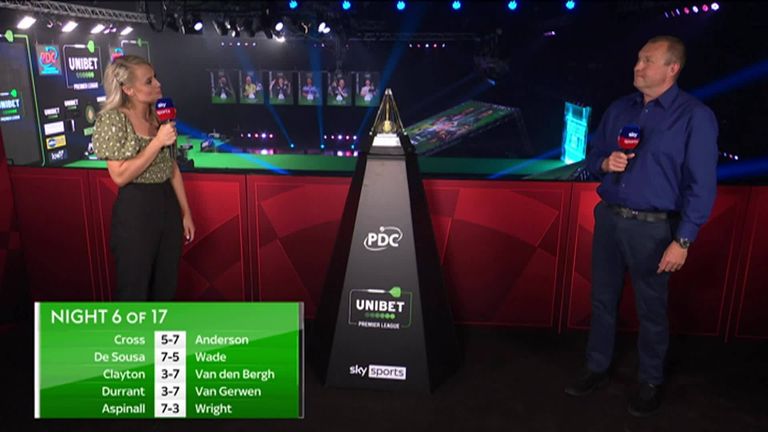 Van den Bergh began the evening in second spot, but managed to topple league-leading Jonny Clayton with a high-quality display that continues his fantastic start to his debut Premier League season.

Joining the Belgian on eight points are Nathan Aspinall and Michael van Gerwen, but defending champion Glen Durrant is on the brink of being eliminated after his defeat by MVG left him five points from safety and with a -28 leg difference.

With just three games left to save his skin, the three-time BDO world champion, who beat Aspinall to lift last year’s Premier League crown, could not arrest his slide and he will need to win all three of his remaining games and hope a host of results go his way to have even the slimmest chance of survival.

Jose De Sousa and Gary Anderson moved within striking distance of the play-off places as James Wade slid into the bottom two places, but The Machine is just three points off a place in the top four as the competition remains wide open. 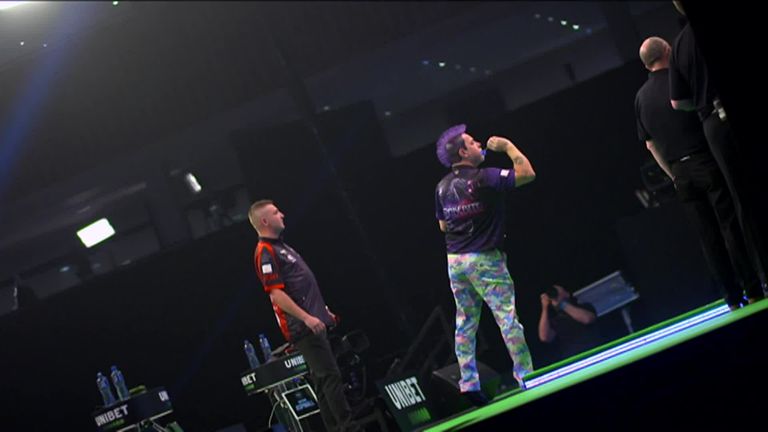 Dimitri Van den Bergh and Jonny Clayton served up a high-class contest that featured 11 maximum 180s but in the end a burst from Van den Bergh was enough to take him back to the top of the table. 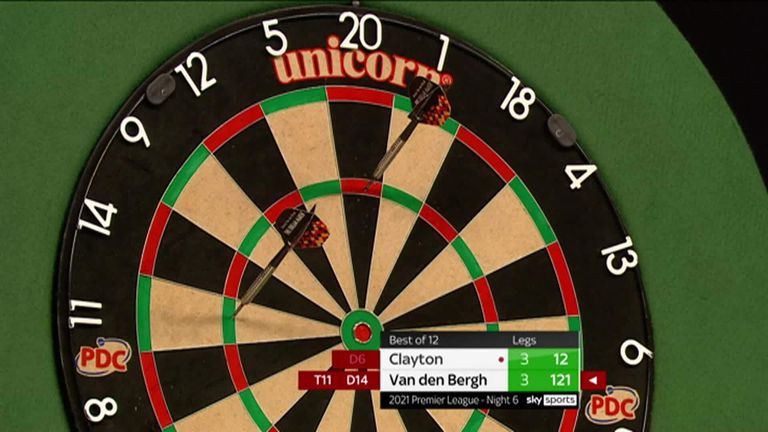 Van den Bergh had been knocked off top spot on the final night of the first week when he lost to Jose de Sousa but from 3-3 he won four successive legs to race to a third win of his debut Premier League campaign.

With little between the pair, who have both been contenders over the last two years of this competition, Van den Bergh’s decisive 121 finish – in response to Clayton’s own 121 check-out – gave him a 4-3 lead.

Crucially the leg also featured a couple of missed darts at double from Clayton to level and when the Belgian took out an ice-cool 105 finish for a 5-3 advantage he did not look back.

Back-to-back 17-dart legs secured victory for Van den Bergh, who will return on Tuesday night to face Rob Cross as the man to catch. Nathan Aspinall remains in contention to turn his runners-up finish in last season’s Premier League into a title charge after a super performance blew away Peter Wright in the final game of the night. The Asp showed all his fighting qualities as he stormed back from an early 2-0 deficit, to edge into a 3-2 lead with all five opening legs won in 14 darts or fewer as the pair served up a treat

Aspinall’s bullseye finish on 84 had levelled the contest after when Wright missed the same target for the tournament’s first 170 finish, Aspinall had his advantage only to see Snakebite strike back with a brilliant 120 combination finish.

However that was as good as it got for Wright as Aspinall powered down the stretch with check-outs of 74 and 56 giving him a two-leg advantage a a classy 13-dart leg securing a point, which became two when he pinned double top after Snakebite missed darts to extend the contest. 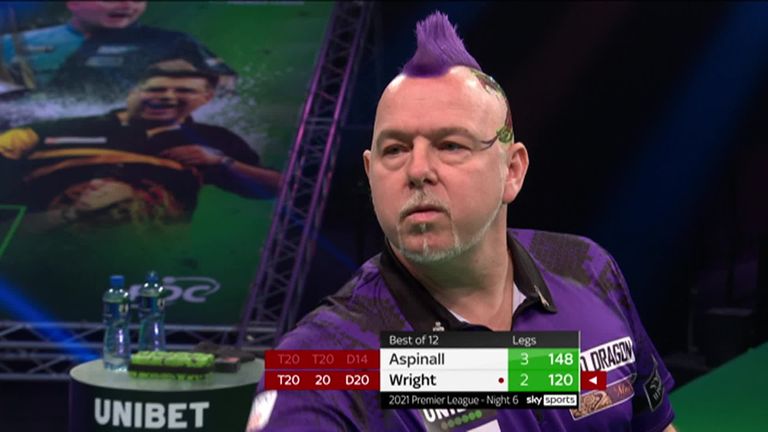 Gary Anderson defied a 100 average from Rob Cross to return to winning ways with a 7-5 victory that moves him back into the top four for the first time this season after Cross missed darts for a share of the spoils. The Flying Scotsman had lost two of his last three games during the opening week, but despite being outscored by his opponent Anderson was too strong as missed doubles haunted Cross who has started brilliantly

The 2019 runner-up averaged almost 116 across the opening exchanges but the first four legs were shared before Anderson made his move breaking the Cross throw to lead 3-2 with a brilliant 12-dart leg.

Cross’ doubles began to desert him as he missed darts for each of the next two legs. Anderson punished him on both occasions, a classy 70 finish moving him three legs clear.

Voltage threatened a comeback, fighting back to 5-4 and 6-5 after Anderson had become the first to secure a point. But with a draw there for the taking, Voltage missed two darts for a level match and Anderson swooped in for victory on double top.

Jose de Sousa was winless in his first four Premier League matches, but he produced a clinical display to beat James Wade and claim a 7-5 win that catapults him into the play-off picture.

The Special One is playing in his first-ever Premier League campaign and during the first week his performances did not get the reward they merited, but a 101 average, five maximum 180s and a 75 per cent success rate on his doubles secured an impressive victory.

De Sousa opened up with a brilliant 110 finish as there was little to separate the pair early on, and it was the Portuguese who made the first decisive move. A 14-dart leg gave him a 3-2 lead before he followed up with a magnificent 12-dart leg that finished on the bullseye for the first two-leg advantage of the contest. 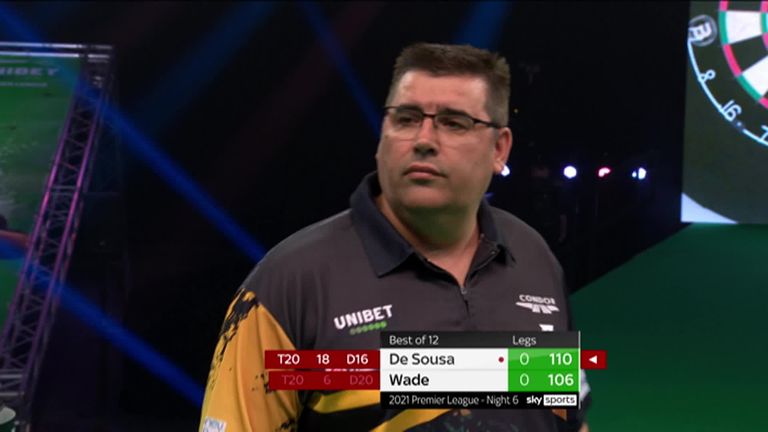 Wade was doing little wrong and a 13-dart leg of his own kept him within one leg but De Sousa conjured up another two-leg burst to secure a point. But The Machine is a tough nut to crack and with a three-figure average himself, he claimed the next two legs to keep himself in with a chance of the share of the points.

But the Portuguese thrower gathered himself to wrap up victory with the best leg of the match, needing just 11 darts to secure maximum points.

Michael van Gerwen was far from his best but managed to inflict a sixth successive defeat on reigning Premier League champion Glen Durrant to stay level with the league leaders. Van Gerwen’s campaign has been far from the consistent winning machine that won five Premier League titles before missing the play-offs for the first time last year. A 7-3 win against an out-of-sorts Durrant will do little to alleviate his concerns as he missed an astonishing 22 darts at double and averaged in the mid-80s for much of the contest.

MVG was far from dominant as he opened up a 4-1 lead after Duzza had edged a nervy opener that set the tone for the contest. Durrant missed a host of opportunities to keep in touch but despite Van Gerwen’s errant finishing he couldn’t get close enough to make inroads.

The three-time BDO world champion hinted at a possible comeback and welcome return to form when he claimed the sixth and seventh legs – the latter with a clinical two-dart 76 check-out.

But Van Gerwen managed to scramble over the finish line, with an improved performance on the outer ring and an increase in scoring enough to keep Durrant at arm’s length and a welcome return to winning ways.

Don’t miss an arrow as Premier League Darts continues on Tuesday from 7pm on Sky Sports Action – and stick with us through the week for updates, interviews and reaction from start of this year’s competition