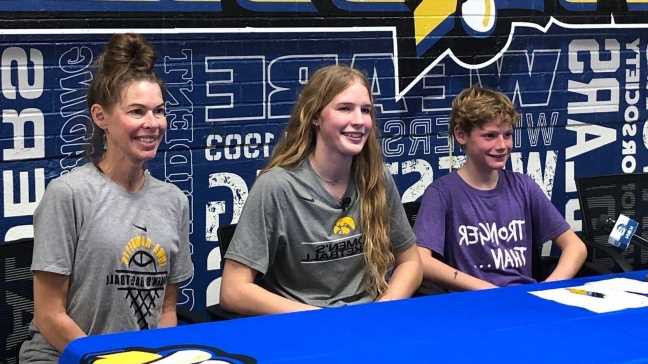 M.A. Voepel covers the WNBA, women’s college basketball, and other college sports for espnW. Voepel began covering women’s basketball in 1984, and has been with ESPN since 1996.

NICKERSON, Kan. — Just over four months after she was severely injured and her father was killed after being struck by a car, Ava Jones signed a national letter of intent for the Iowa women’s basketball team Wednesday.

Jones, 17, suffered a traumatic brain injury, torn ligaments in both knees and a shoulder injury when an impaired driver hit her and her family on a Louisville sidewalk on July 5, while there for an AAU tournament. Her father, Trey Jones, died a few days later and her mother, Amy Jones, suffered a brain injury and 21 broken bones. Her younger brother, Creek, escaped serious injury.

The driver, Michael Hurley, was indicted by a grand jury in August and charged with one count of murder, two counts of first-degree assault, one count of assault in the fourth degree and one count of operating a motor vehicle under the influence. According to the police report, Hurley said he had taken the opioid Hydrocodone before driving.

Jones, a 6-foot-2 forward who was ranked 83rd by ESPN HoopGurlz for the Class of 2023, originally committed to Arizona State but then decommitted in March after coach Charli Turner Thorne retired. Jones reopened her recruiting and announced her commitment to Iowa on July 3, two days before the crash.

Both Jones and her mother had extensive hospital stays in Louisville. Jones returned to Nickerson High in October for her senior year. In normal circumstances, she would have played volleyball this fall, and her last season of high school basketball would start next week.

She said Wednesday’s signing has been something to look forward to with the difficulties she and her family have faced.

“It felt really good to have signed; it actually feels more real,” Jones said. “I want to play basketball again. Hopefully, I’ll be able to, but I don’t know. But even if I’m not able to, I will still be around the team. I love the Iowa team and the coaches.

“The support I’ve gotten from everyone has given me even more momentum to get better. I feel like my dad was with me today, because this was his dream, too. This was our goal together.”

Jones is able to walk, and her speech has greatly improved as she has worked with a therapist. Over the next several months, she will have surgery on both knees and on her shoulder.

Amy Jones has undergone multiple surgeries and is able to walk with the assistance of a walker.

The Jones’ extended family, friends, teammates, coaches, students and teachers were at the Nickerson High cafeteria for the signing. Trey Jones had been a teacher and a track coach at the school.

“The amount of people who came out to support Ava is so special, as is everything the community has done for us,” said Amy Jones, who can’t drive yet but has been able to return to work remotely as assistant superintendent in the Nickerson school district. “It’s nice to see her happy and fulfilling a dream. She’s been there for me, because when I start getting down, she will say, ‘OK, Mom, we can do this. We’re gonna keep going.’ She is just so determined and driven.”

Iowa assistant coach Jan Jensen said that there was no hesitation from the university or head coach Lisa Bluder that Jones’ scholarship would be honored.

“Coach Bluder said, ‘She’s a Hawk, she’s ours, she’s family. She’s going to be with us,'” Jensen said by phone Wednesday.

“Once she is here, we’ll have her doing every part of the team stuff that she can possibly do. When we’re learning the offense, she’ll be learning it. We want her to be included in everything.”

Jensen said that she has been amazed at Jones’ progress

“Ava and I talk every couple days,” Jensen said. “As her brain started to heal, it was a very good thing, but also a difficult thing when she began to fully realize the loss of her father. I knew there would be this big void that Trey wasn’t there today. But in talking with her, she knew this moment was something they had all been working for.

“I would not bet against her after what that family’s been through, with that resolve they have shown. There have been lumps in our throats today with this signing; we’re beyond thrilled.”

On Nov. 17, the No. 4 Hawkeyes will play Nov. 17 at Kansas State in Manhattan, which is about a two-hour drive from Nickerson. Jones plans to be there to watch.

“I could give up, but I’m really just not that type of person,” Jones said. “And my dad was not that way, either. I don’t know any other way but to keep going. So maybe it’s just in my DNA.”