Cyclist Remco Evenepoel crashed and fell 30ft over a bridge and into a ravine during the final 50km of the Il Lombardia race in Italy.

Footage showed the Deceuninck-Quick Step rider, who was part of a leading group, hitting the barriers on the side of the road before going over the top of his bike and falling off the bridge.

Paramedics were quickly on the scene and the rider was taken to hospital, where he is said to be conscious and under the assessment by a medical team. 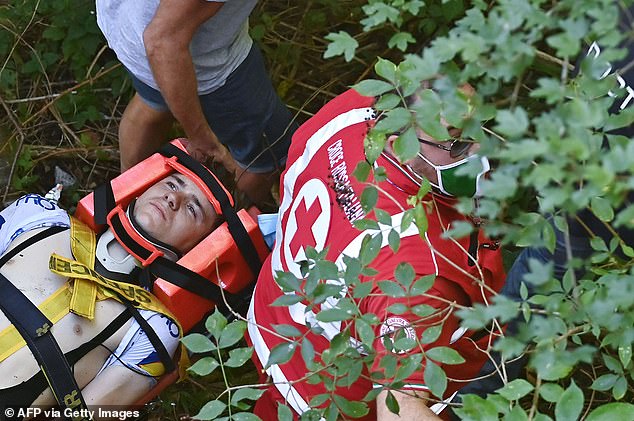 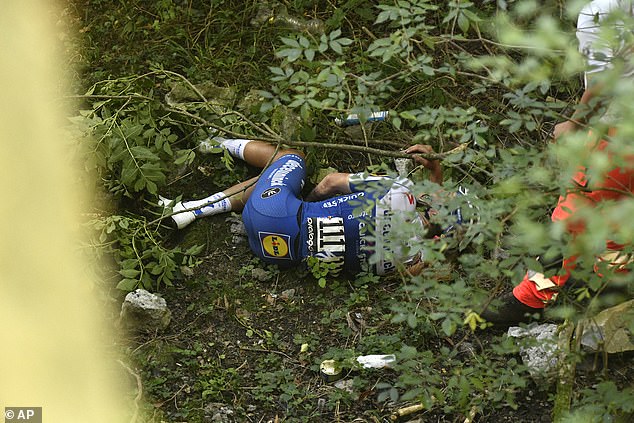 Photos showed the cyclist was conscious when the medics arrived and he was placed in a precautionary neck brace before being taken to an ambulance.

They said: ‘First update on @EvenepoelRemco. He is at the Como hospital, where he is conscious and his condition is being assessed by the medical team. We hope to have more news soon.’ 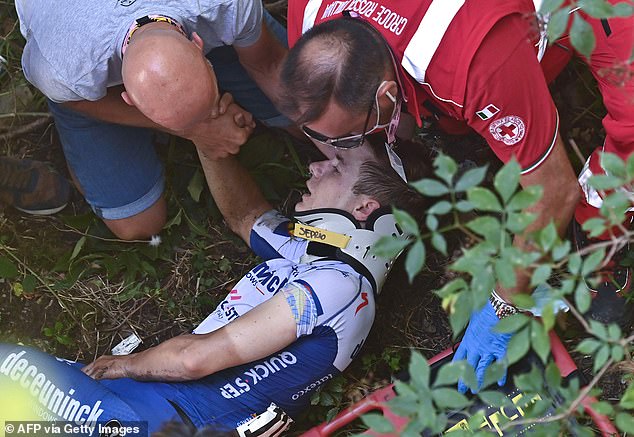 The account had earlier tweeted: ‘Thanks to everyone who sent their thoughts and best wishes to @EvenepoelRemco at #ILombardia, it means a lot to us!

‘At the same time, we kindly ask you not to speculate about his condition, when we’ll have an update, we will share it with you.’

The 20-year-old Belgian is viewed as a promising prospect in road cycling after winning the Tour of Poland and the Volta a Burgos earlier this year – and he was fourth in the group before his fall in Il Lombardia.

Jakob Fuglsang of Astana was the eventual race winner but there was another scare before the end when Bora-Hansgrohe’s Max Schachmann was struck by a car which had entered the closed roads and cut across him as it attempted to park.

Evenepoel’s incident is the second big crash Quick Step have suffered in the space of a week after the Belgian’s team-mate Fabio Jakobsen was hospitalised and put into an induced coma at the Tour of Poland last week.