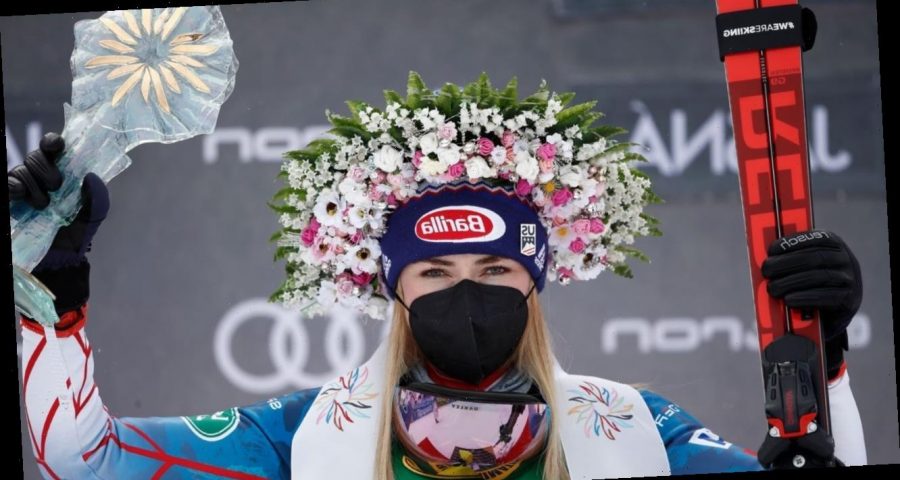 Shiffrin trailed first-run leader Vlhova by 0.27 seconds on a hill where the Slovakian regularly trains.

But the American had a blistering final run to win the race by 0.34 as the two continued their dominance in the discipline.

They have combined to win 31 of the 32 World Cup slaloms held since January 2017, a streak interrupted only by Switzerland’s Michelle Gisin.

“I feel pretty amazing about it,” Shiffrin said about her 45th career slalom win and 69th overall. “It was a really good fight for me and that’s a pretty nice feeling to have right now.”

The result moved Shiffrin within one victory of a World Cup record. Only one skier, male or female, has won more races in a single discipline: Swedish great Ingemar Stenmark triumphed 46 times in giant slalom in the 1970s and ’80s.

Wendy Holdener finished 0.52 behind in third. It was the 26th career slalom podium for the Swiss skier, who is yet to win a race in the discipline.

Katharina Liensberger was 1.42 off the lead in fourth and missed a slalom podium for the first time this season.

The Austrian beat Vlhova and Shiffrin to take gold in the slalom at the world championships two weeks ago, ending the American’s streak of four world titles.

Shiffrin won bronze at worlds but later said she was disappointed in her skiing.

On Saturday, though, the three-time overall champion was back to her best.

“That was good; it was a really big step,” said Shiffrin, who still found “some small things” she could have done better.

The race resembled the victory from Shiffrin’s only previous visit to the Slovakian resort, in 2016, when she also beat the home nation’s favorite, Veronika Velez-Zuzulova.

“Last time it was the fight between Zuzu and me,” Shiffrin said. “It’s actually quite a pleasure to come here and have that fight with these girls. The two times we came to Jasna, we had a Slovakian girl who was on top level.”

The main difference, however, was the lack of spectators on Saturday amid anti-coronavirus measures.

“Last time, for sure, the crowd was bigger and you could feel the atmosphere more for the hometown girl,” Shiffrin said.

The result gave new impetus to the battle for the slalom season title. With three races left, Vlhova was leading Shiffrin by 45 points, with Liensberger 70 points behind in third.

Vlhova narrowed the gap on overall World Cup leader Lara Gut-Behrami. The Swiss skier sat out the race and was holding a lead of 107 points.

The race weekend was initially scheduled to start with a giant slalom, but organizers swapped the program as unfavorable weather was forecast and moved the GS to Sunday.