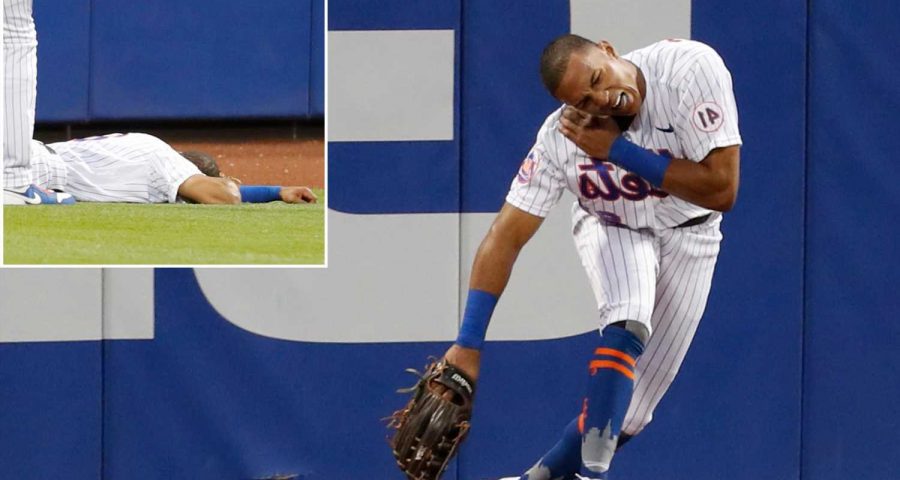 Mets pitcher calls out fans on Twitter for ‘harassing’ his wife

Those endless nights of getting stuck on three or four runs now seem like the good old days for the Mets.

The rookie center fielder hit the fence hard, departing with a left shoulder injury, adding further sting to the Mets’ third straight loss, 3-2 to the Rockies at Citi Field.

Fargas was a replacement for Kevin Pillar, who last week suffered a broken nose when he was hit in the face by a pitch. Pillar was the backup to Brandon Nimmo, who has spent the last three weeks on the injured list with a bone bruise in his left index finger. The Mets have 16 players on the IL.

“Anybody want to suit up?” owner Steve Cohen tweeted.

Fargas departed the game with a left AC joint sprain after crashing into the fence attempting to catch Garrett Hampson’s shot to center that went for an RBI triple in the fourth. Fargas initially remained in the game, but left the game following the Mets’ ensuing at-bat.

Earlier this month the Mets lost Albert Almora Jr. to the injured list after he sustained a left shoulder contusion crashing into the center-field fence attempting to catch a ball.

Cameron Maybin, acquired from the Cubs last week for cash considerations (exactly $1), finished the game in center field. Maybin went hitless in three at-bats with two strikeouts and is now 0-for-19 since joining the team.

Brandon Drury smashed a pinch-hit homer leading off the ninth against Austin Gomber, but the Mets’ comeback stalled against reliever Carlos Estevez.

It marked the third straight game in which the Mets were held to two runs or fewer. The Mets (21-20) still lead the NL East by one game.

“Really we’re exploring all options,” acting general manager Zack Scott said before the game when asked about the roster. “I’m pretty much on the phone all day every day. We have got to find the best solutions always, that is really the job of baseball operations as far as the major league focus goes. We’re trying to find the best internal options, the best external options, trying to get the most out of the guys we have.”

James McCann, in his first professional game at first base, received an ovation in the second after diving to stop Josh Fuentes’ grounder and throwing to David Peterson covering the bag for the out. McCann started at first base to give the Mets another right-handed bat in the lineup and finished 1-for-4 with a solo homer in the seventh for the team’s second hit against left-hander Gomber. McCann struck out with the tying run at second base to end the game.

Peterson kept the Mets in the game by allowing three earned runs on five hits with three walks over six innings to lower his ERA from 4.97 to 4.91. It followed a shaky start in Atlanta in which he surrendered three earned runs over 4 ²/₃ innings in a no-decision.

On this night Peterson at least gave the Mets innings after allowing solo homers to Ryan McMahon and Elias Diaz in the second. The lefty walked McMahon leading off the fourth and was stung by Hampson’s triple with one out. But with runners on second and third, Peterson retired Raimel Tapia to avoid further damage.

The Mets didn’t get their first base runner until the fourth, when Jonathan Villar singled leading off the inning. But that enthusiasm was short-lived: Francisco Lindor hit into a 6-4-3 double play and was booed. Lindor finished 0-for-4 and is batting .189.