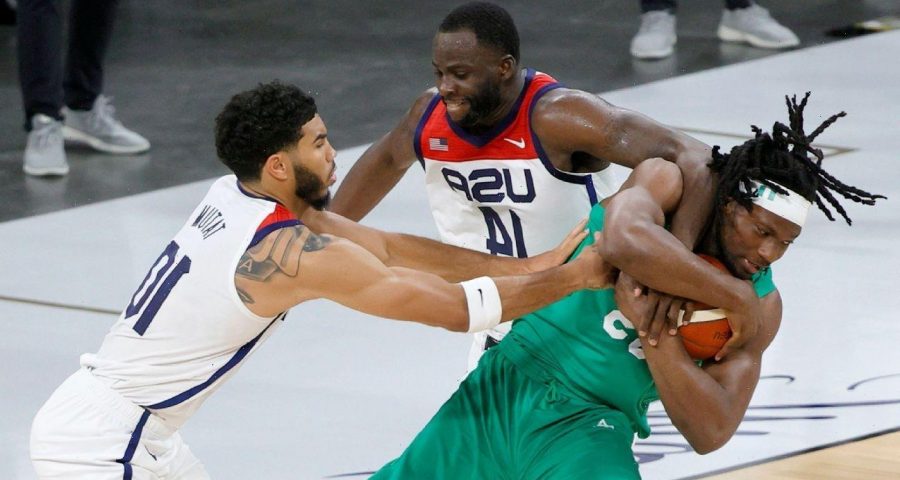 Itinerant writer. Engineer in a previous incarnation. One time Black Belt. Lover of football, flirter with other sports.

Nigeria became the first African country to beat Team USA when it shocked the No. 1 side 90-87 in a pre-Olympics exhibition game in Las Vegas on Saturday, and D’Tigers coach Mike Brown told ESPN that it was no fluke.

The rare loss was only Team USA’s third in 57 exhibition games since 1992, and the last time the Americans lost was against Australia in 2019. The two previous meetings between the U.S. and Nigeria ended in 83-point and 43-point blowout wins for Team USA.

Brown, who is an assistant coach with the NBA’s Golden State Warriors, told ESPN that his team fully expected to win the clash, and that come game time in Tokyo in less than three weeks, it will expect to beat Italy, Germany and Australia.

“The main thing is, we expect to win every time we step on that floor,” Brown said. “So if we truly believe that, then when we win even a big game like that, although it was just an exhibition, we are going to take it in stride, because we know that the next one — touch wood — we could lose.

“So winning a game [against the U.S.], yeah, it could impact or affect a lot of people. But I don’t think it will affect this group.

“But come Olympic time, when the lights are on, we will be ready. Believe that.”

Nigeria’s players had outstanding performances across the board, draining 20 three-balls on an amazing 47% shooting from behind the arc.

At the other end of the floor, Miami Heat rookie Precious Achiuwa’s commanding rejection on Kevin Durant’s attempted block was emblematic of Nigeria’s defensive efforts, including shepherding Team USA way out of shooting range as it attempted a potential tying three-point play with 13 seconds left on the clock.

Importantly, this was the first time this rejiggered team under Brown was playing together. A scrimmage scheduled for the day before the game was canceled, leaving the players with nothing but practice time going into the matchup.

So how did they win it?

Most teams stepping on the floor against Team USA walk on with trepidation, if not awe, knowing they are playing against a team with top-shelf talent.

Not this Nigeria team. Everything — from the way they entered, the way they competed, their aggression and their shooting — showed they were in no way intimidated by Team USA.

This attitude will be important for the D’Tigers going into the Games and the future. At the World Cup, they lost games they should have won, with many pointing to too much respect for the opposition.

Coming away with the W after playing with such a fearless attitude against the world’s best team should add confidence going forward.

Achiuwa’s block against Kevin Durant’s attempted dunk was the highlight of the night and should be well on its way to becoming one of the most iconic images of Nigerian basketball.

Brown said the Miami Heat rookie is a special talent: “He is extremely important to this program. There is no ceiling to how good he can be.

“It’s just a matter of him understanding how he can utilize all those attributes every single second he is on the floor. He is still learning, and that is why I say he is not even close to touching his ceiling.

“And once he completely figures it out, it’s a wrap for anybody that is in front of him because he is that dynamic on the court.”

If some didn’t know of Achiuwa, almost no one had heard of Caleb Agada, who went undrafted in 2016 and plays with Hapoel Be’er Sheva in the Israeli Premier League.

The 6-foot-5 guard was born in Ontario, Canada, and played college ball for the University of Ottawa. On Saturday, he turned more than a few heads when he went off for 17 points, the same as KD, and shot 3-of-3 from deep.

Old guard was not missed

When Brown named his 16-man roster, some Nigerian basketball faithful were shocked by the absence of two of the most experienced leaders on the team, previous captain Ike Diogu and his assistant Ben Uzoh.

The key question was how this team would fare without two of its most important leaders. Admittedly, their production might not be at the same level as it was in their heyday, but there are no better glue guys to hold a team together.

And when that leadership helps beat Team USA, there is little more to add. Diogu and Uzoh are irreplaceable, and their contributions to Nigerian basketball rank up there with the best. But the performance from this team showed that the new guard will carry that legacy forward.

Don’t give in to overconfidence

Nigeria’s next game is against Argentina on Monday, and then it’ll face Tokyo group opponent Australia on Wednesday.

Brown said that while Nigeria will go into the games with confidence, it will be about not beating itself: “We are a confident group, hopefully not overly confident.

“That is why it is great to have these exhibition games because we can get a real sense of where we are. But we are a confident enough group that we know that anything can happen at any time.

“We know for sure that any time we step on the floor, if we do our jobs, we are going to give ourselves a very good chance of beating anybody that is in front of us.

“I tell our guys this. If we truly play to our ability every time we step on the floor, at the end of the day if we lose a game, in my opinion it’s because we beat ourselves.”