ZULUONMYSTOEP should find this drop in class to his liking as he returns from a little break. He showed some promise on his past two runs around here and the quality of opposition makes his a real contender. 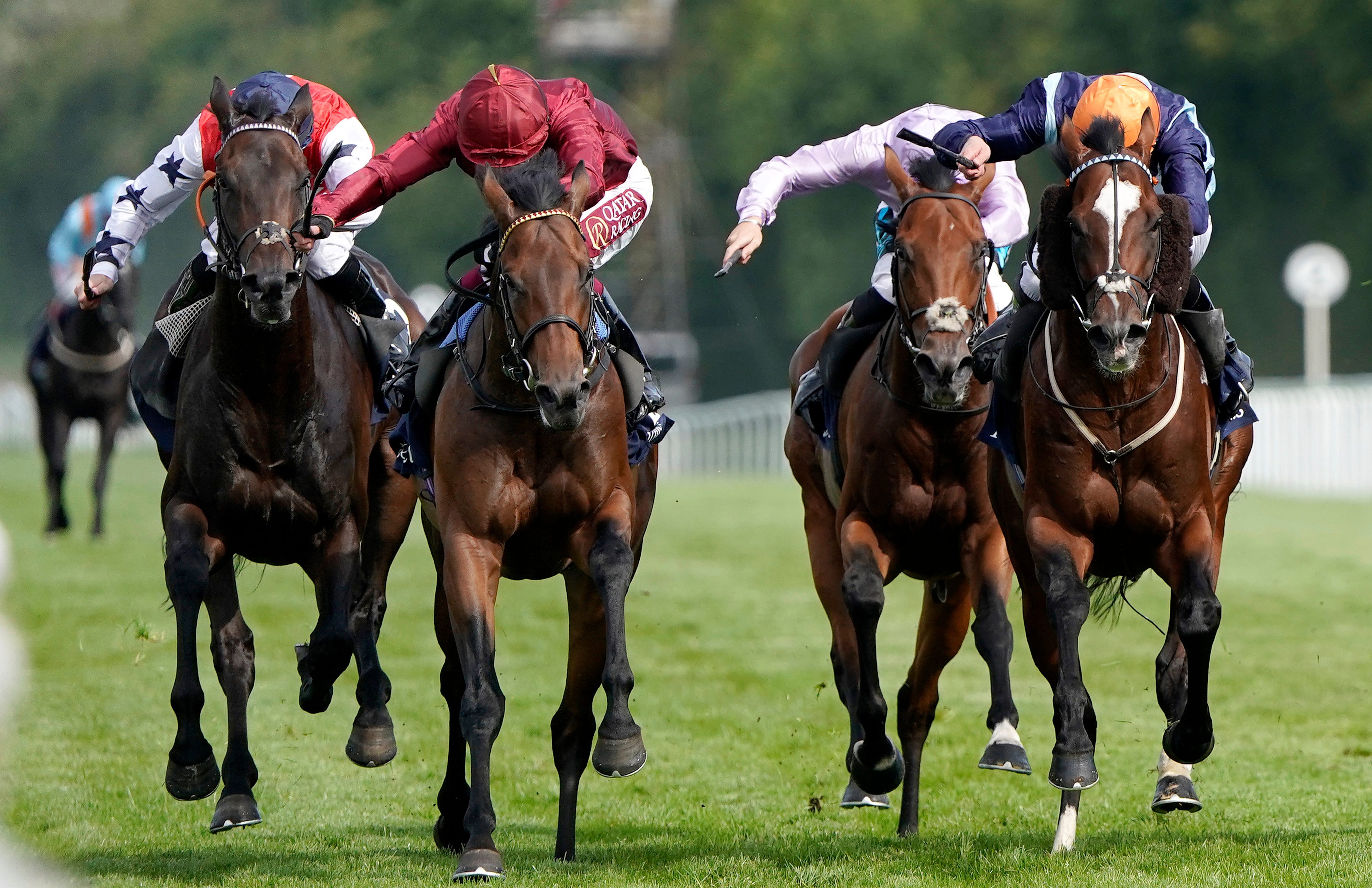 Great Esteem took a step forward when finishing second here last time despite going off at long odds. If he improves again, he won’t be far away.

Pacific Dream showed a little promise on debut when looking very green. There should be something to build on there.

El Romiachi is proving a little frustrating but he has shown good signs here a couple of times and could run into the frame.

City Deep has had 11 attempts to get off the mark now and didn’t show a lot last time. But he was a fair fourth here three runs ago and a repeat of that could sneak him onto the podium.

Sun Giant has had a couple of quiet runs, including over a furlong further at Turffontein latest. He can improve on that and trainer Mike De Kock is firing in plenty of winners at the moment.

Bend The Knee was nibbled at in the betting before being outpaced over shorter here last time but has yet to place in his eight outings.

MAGOGO got the better of a few of these when winning at Turffontein, including the fancied Mynage. That was a decent effort as she was very green but was backed from 12s into 7-2 so must have been showing plenty at home. There’s every chance she can improve again.

Mynage is better off at the weights today, which could make a difference and she may have needed that debut outing too. It was a decent battle between the pair and they could end up fighting it out again.

Afternoon Tea has a bit more experience and she could improve for this step up in distance. She finished well over 5f last time so shapes like a stayer. The market moved very much in her favour that day so look out for another move.

Cloth Of Ice wasn’t asked too many questions when making her debut last month. She missed the break before running on into sixth. There’s every chance she will learn from that.

Zernez didn’t get going in a similar contest at Turffontein latest but this is just her fourth run so it’s too early to write her off.

Don't miss out on all the best of Sun Racing

SIREN OF GREECE gets a handy fillies’ allowance and can make the most of it. She created a good impression when a close-up third on debut at Turffontein before returning there for an excellent second last time. This step up in distance looks a wise move and she’s the one to beat.

The Eighth Lord improved for moving up to this trip when beaten just over a length last month. He was always up with the pace before staying on well. This is a similar standard of race so he should be right there again.

Fire And Ice got off the mark at the fifth attempt at Turffontein when pulling nicely clear. That race has already produced winners so the form looks decent enough.

Luke Moonwalker is the other past winner in the field having struck on the all-weather last week. That was over two furlongs shorter so he has staying power to prove today.

Blue Moon City looks the pick of the newcomers from a trainer and jockey team that do well here. Edaara is capable of better than we’ve seen so far in the famous Sheikh Hamdan blue colours.

ABDUL looks hard to beat after a good second over what looked an inadequate trip at Turffontein last time. He did all his best work in the closing stages and came home ahead of a couple of these. This race looks no stronger so he should be right there again.

Kool Baikal is a proven stayer who went close over slightly shorter here last time. He steps up in distance again, which could bring more improvement.

Grey Street has plenty of miles on the clock but he comes here in good heart after a narrow defeat over course and distance 16 days ago. He was in a real battle up the straight and will be fighting for a place at least again.

Capjack was down the field in that race but it was only his third run and the first time he’d gone over anything like that distance. He ran on well in his own time and clearly has plenty of petrol in the tank.

The others have a lot of improving to do with Romantic Era at least appearing to stay last time so the extra quarter-mile could conjure a bit more but it really needs to.

OFFER OF THE DAY – BETFAIR

New Customers get a £20 free on the Exchange if your first bet loses. 18+ T&C's apply Begambleaware.org. BET NOW

AFRICAN ADVENTURE looks the bet of the meeting as he takes a drop in class from what looks a very winnable mark. He was just run out of it in stronger company here last time and a repeat of that form should be good enough.

Theravada is a little hit and miss but he has some fair efforts in the book. He has had a little drop down the weights after a midfield effort at Turffontein last time that could make a difference.

Capetown Affair looks a big price after failing to get home over a furlong further last time. He led for a long way there and should find it easier to keep going today.

Highlander was well backed before running too bad to be true over course and distance last month. He has been knocking on the door before that so watch for another market move.

Kings Cup could be in the mix given he has plenty of staying power. He has recently switched yards and has shown some positive signs which give him an each-way chance.

Bellagio King won over course and distance two runs ago so can’t be ruled out despite this looker a tougher race.

HEART OF A LEGEND had no luck in running when fifth here over a furlong shorter last time. She was forced to come out wide in the closing stages before finishing with a real rattle. The extra trip should help on that score and she can make up for that disappointment.

Tahitian Orana was last seen in a Listed contest so should find this a simpler task. She earned her place in that company with a good win over a mile around here last month when there was plenty left in the tank. This is better race than that but not by much.

Moroccan Flame was a course and distance winner last season and is better than we saw here last time when she was a well-beaten eighth. This is a drop in class and she can’t be written off.

Jive Express has a win and a second from two runs over this course and distance. The most recent of those came last time when she finished strongly to score by just under a length. She has more weight today but is clearly in good form so should be in the mix again.

WAR JEWEL went close over course and distance last time when doing his best work at the finish. His best form has come over this trip and he looks a fair price in a wide open contest.

Akwaan goes up in distance after scoring with plenty in hand over 7f last month. He ran on well so there’s every chance he’ll stay as he did when placed on his first crack at this trip last season.

Father Time looks a fair price after finishing like a train to strike over 6f at Turffontein on his latest start. This stiffer test of stamina could bring improvement at this early stage of his career.

Opening Gambit won cosily over 7f here latest when coming home powerfully. The second has scored since so the form looks decent enough.

He needs a bit more in this handicap company but is capable of going close again.

Top Rank catches the eye coming down the weights. He has winning form around here and showed some positive signs last time.

Liberado takes a drop in class and has had some help from the handicapper. That could help turn his form around as he likes this course and distance.

ROGER THE DODGER sprung a surprise when winning at long odds on debut over 5f here last time out. He was last in the closing stages and looked green as grass before rattling home to score by more than a length. That was an impressive effort and there should be more to come with the benefit of that experience.

Grindelwald got the job done well when winning easily over this trip at Turffontein earlier this month. He pulled right away from his rivals and looks a major danger again.

Undisclosed didn’t get going at Turffontein last time but earlier won nicely here and should be in the mix again.

Shortstop usually runs over longer trips but has gone well at this distance too and wasn’t beaten far in a decent race here last time. The winner of that has scored again since.

Strikeitlikeamatch didn’t get a lot of luck in running last time. He saves his best for this distance and could run into the places with better fortune today.

Written In Stone drops in distance and has had a little help from the handicapper. He has gone well here before and has an each-way shout.