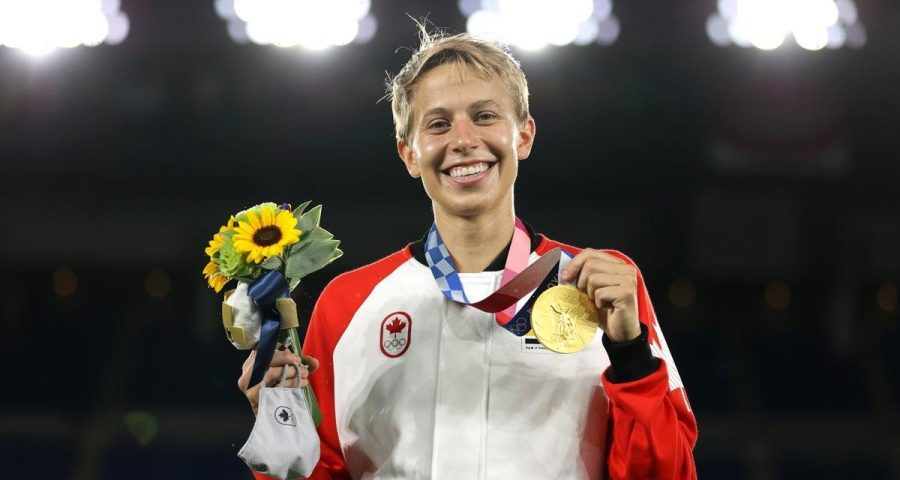 Gold medalist Quinn #5 of Team Canada poses with her gold medal during the Women’s Football Competition Medal Ceremony on day fourteen of the Tokyo 2020 Olympic Games at International Stadium Yokohama on August 06, 2021 in Yokohama, Kanagawa, Japan

Quinn, who goes by one name, was one of at least three transgender athletes to compete at Tokyo 2020, along with New Zealand weightlifter Laurel Hubbard, and American skateboarder Alana Smith – but the only one to leave Japan with a medal.

Canada got to the gold medal match by beating Team USA, and then beat Sweden 3-2 on penalties after the final ended 1-1.

“Coming out is HARD ( and kinda bs),” they wrote in a social media post to announce it.

“I know for me it’s something I’ll be doing over again for the rest of my life. As I’ve lived as an openly trans person with the people I love most for many years, I did always wonder when I’d come out publicly.”

In their announcement, Quinn urged people to be better allies to trans people, to follow trans people such as author Janet Mock, and to practise using gender-neutral pronouns with friends or in the mirror.

The Toronto-born athlete made history as the first openly transgender athlete to compete in the Olympics when they took part in Canada’s opening match with Japan, which ended in a 1-1 draw.

“First openly trans Olympian to compete. I don’t know how to feel. I feel proud seeing ‘Quinn’ up on the lineup and on my accreditation,” Quinn said in a statement after that game.

“I feel sad knowing there were Olympians before me unable to live their truth because of the world. I feel optimistic for change. Change in legislature. Changes in rules, structures and mindsets.

“Mostly, I feel aware of the realities. Trans girls being banned from sports. Trans women facing discrimination and bias while trying to pursue their Olympic dreams.

“The fight isn’t close to over … and I’ll celebrate when we’re all here.”

Quinn previously played for Duke University, then as a professional for Washington Spirit, Paris FC and Seattle Reign FC.