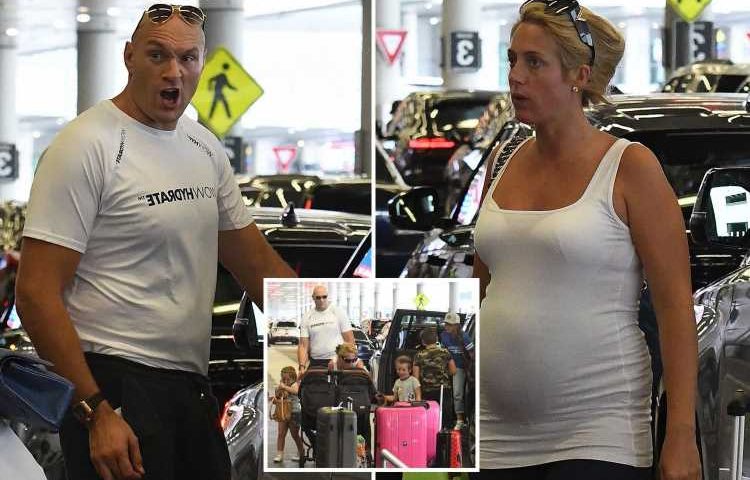 TYSON Fury may have been jetting around the world on a private plane – but the star looked less than relaxed on his return to the UK.

The Gypsy King appeared stressed as he arrived at Miami airport over the weekend, alongside pregnant wife Paris and their five children. 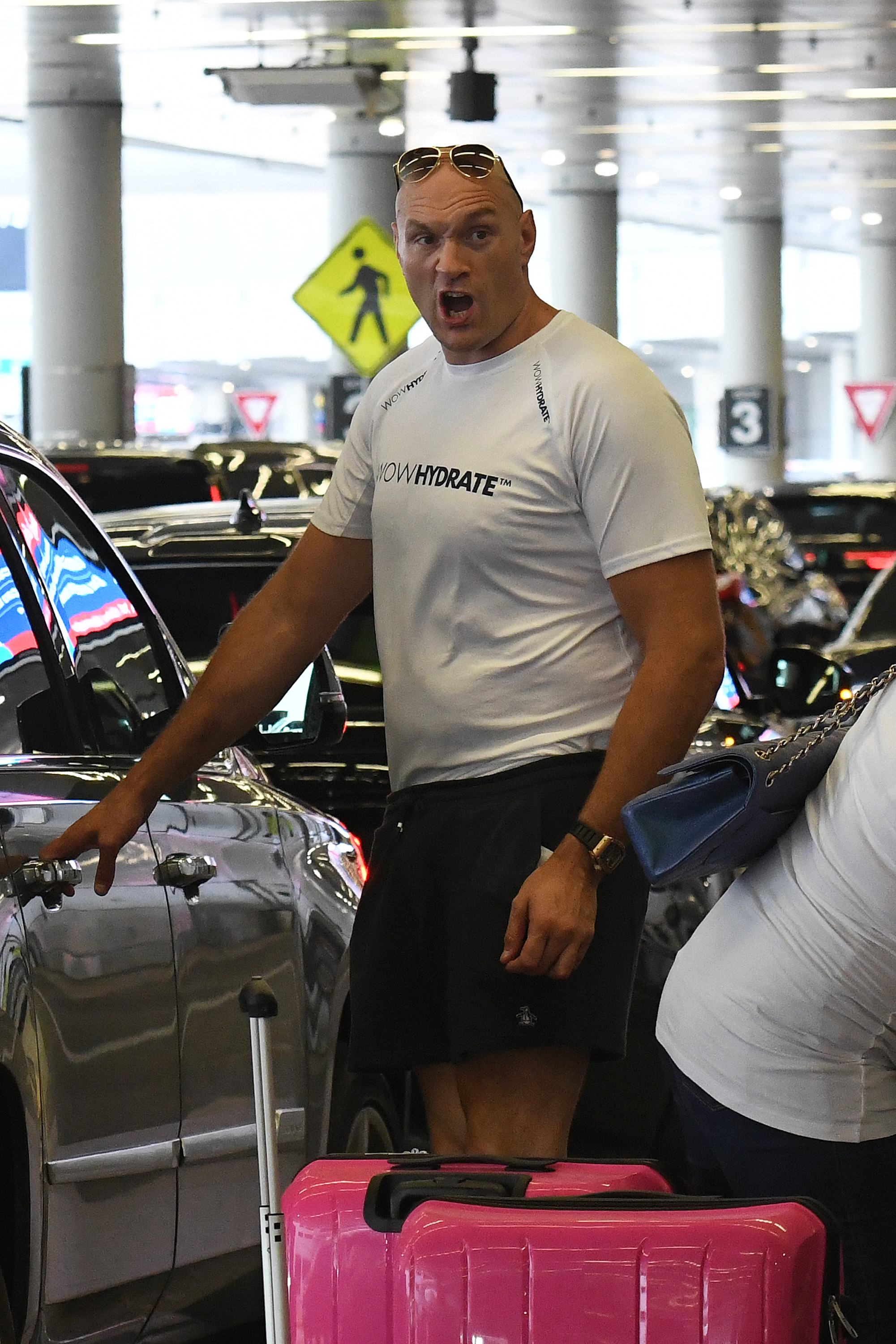 Making the most of his time Stateside, Tyson, 32, had kicked back by shopping for a private jet and partying at NASCAR with his family.

But as his trip drew to a close and he headed to the airport with his five children in tow – the champion boxer looked in low spirits.

Travelling in first class didn't appear to take any stress off the situation as he and his pregnant wife, 31, struggled to keep control of the kids.

Appearing to shout angrily towards his wife, Tyson could be seen hurling suitcases out of the boot of a people carrier. 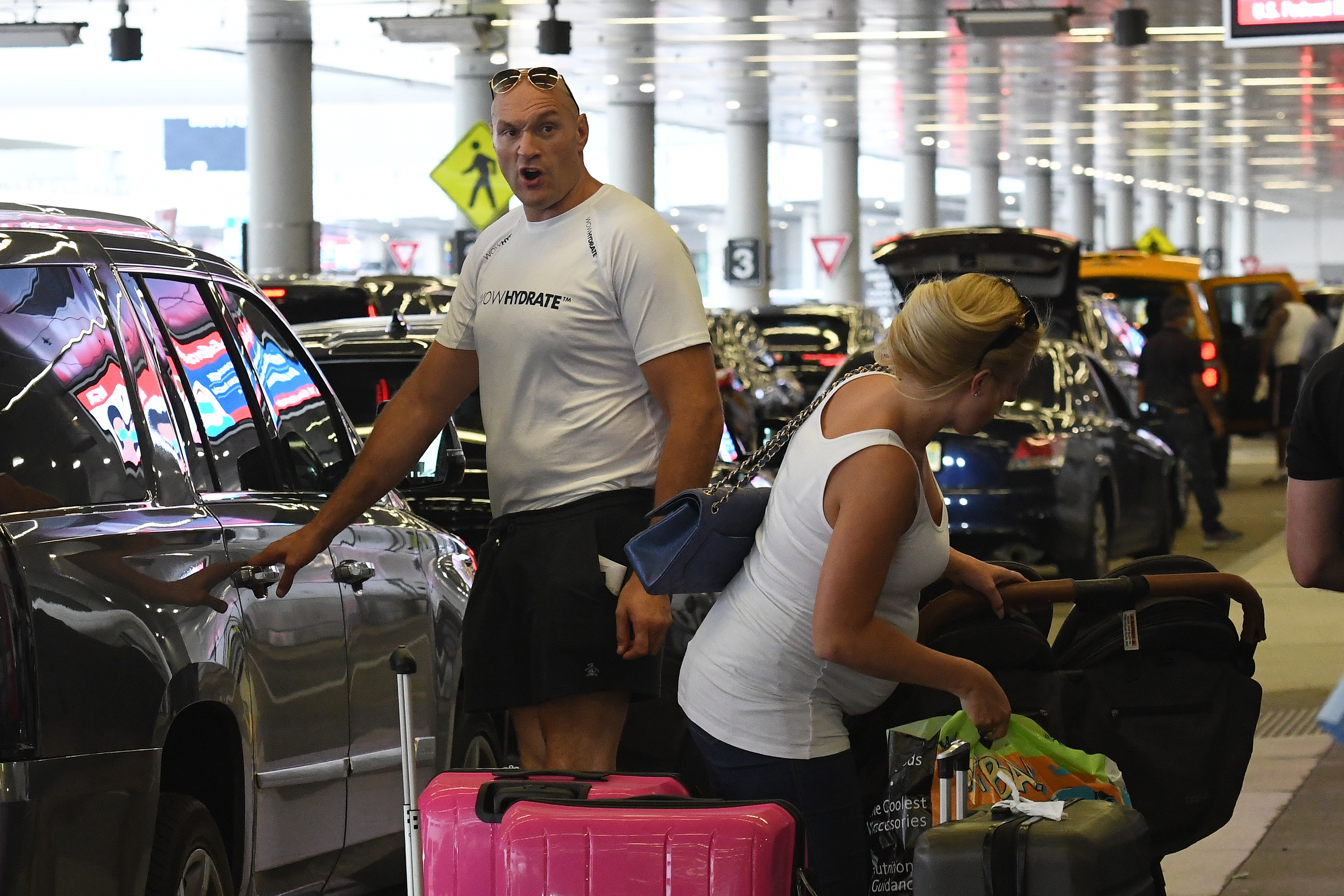 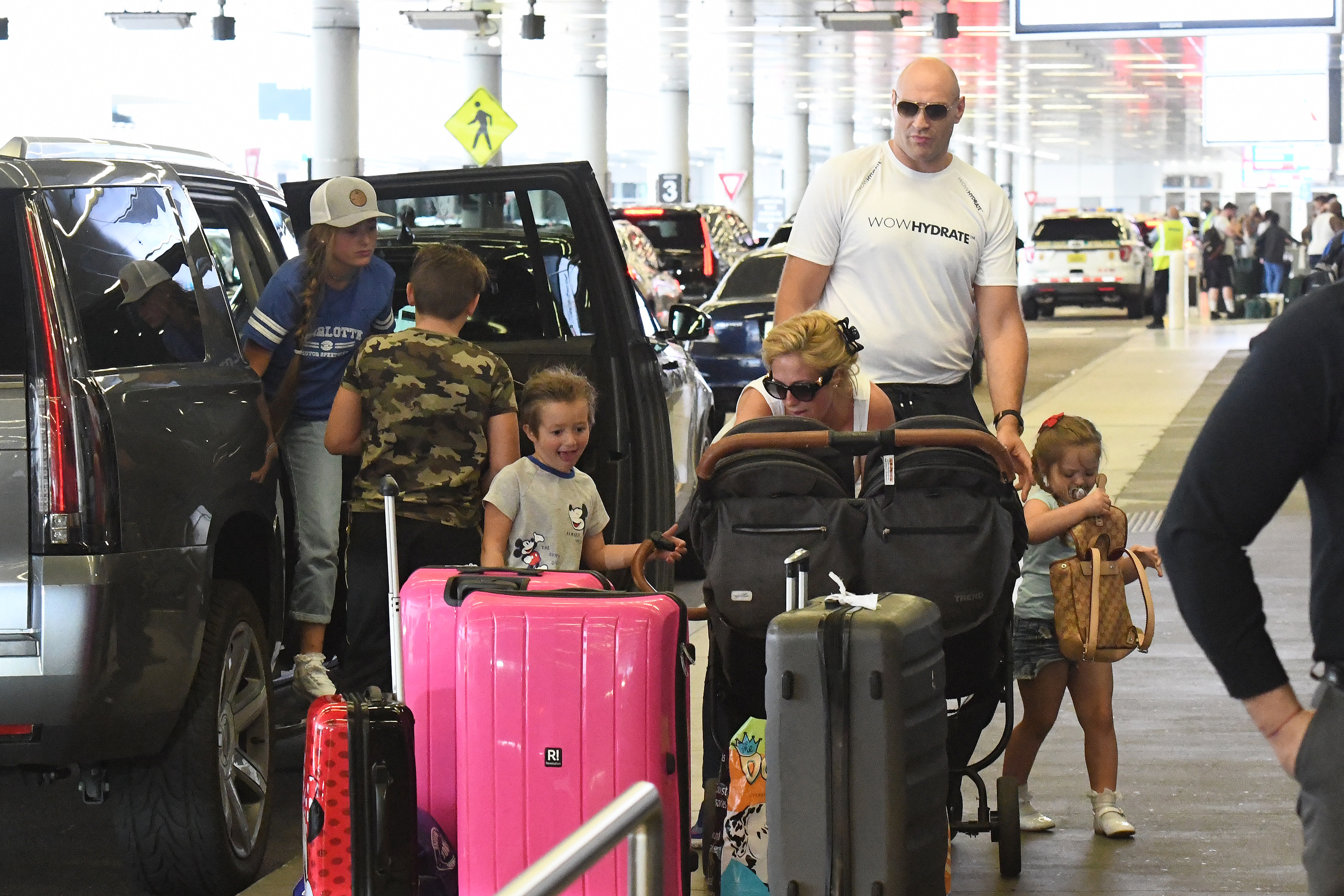 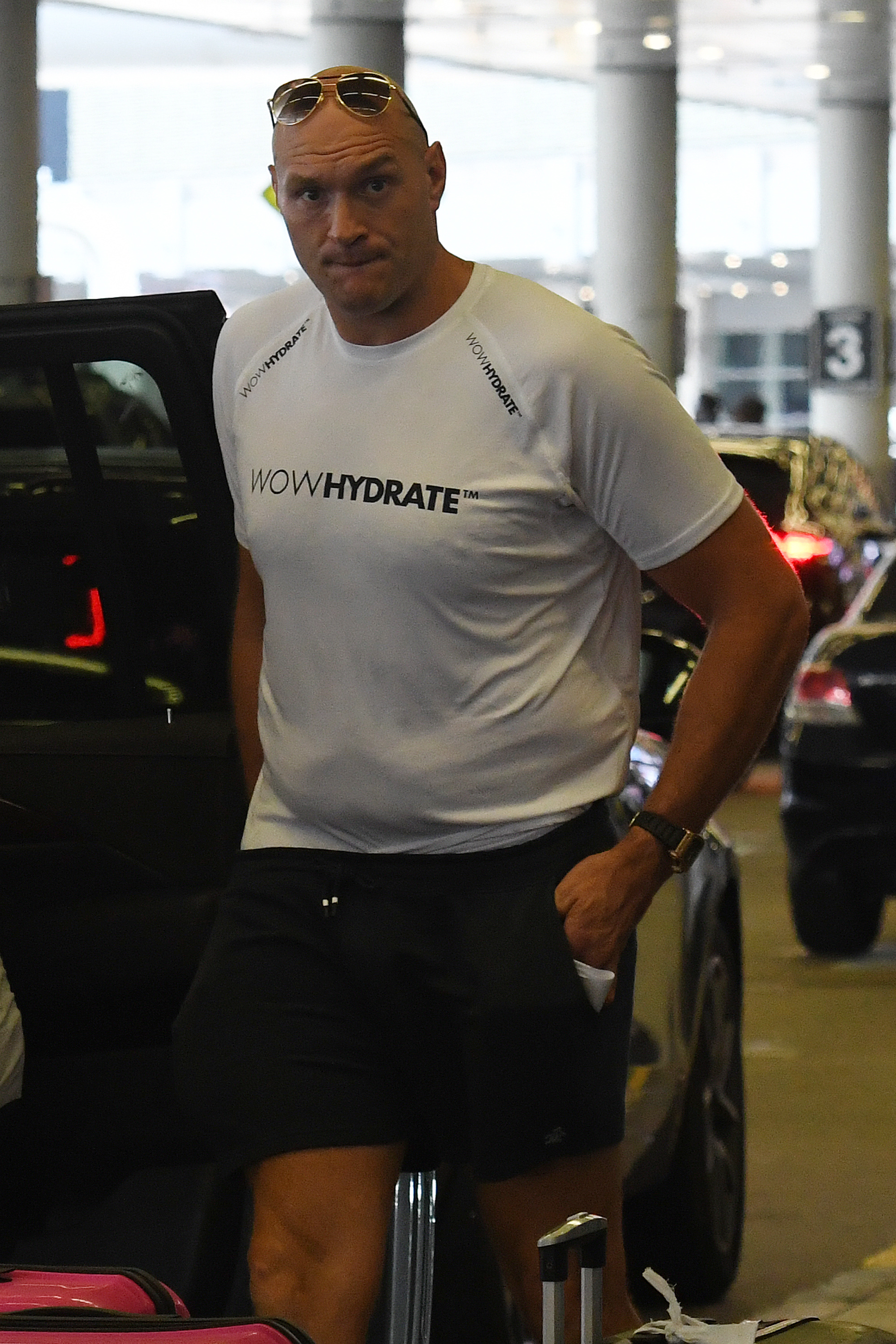 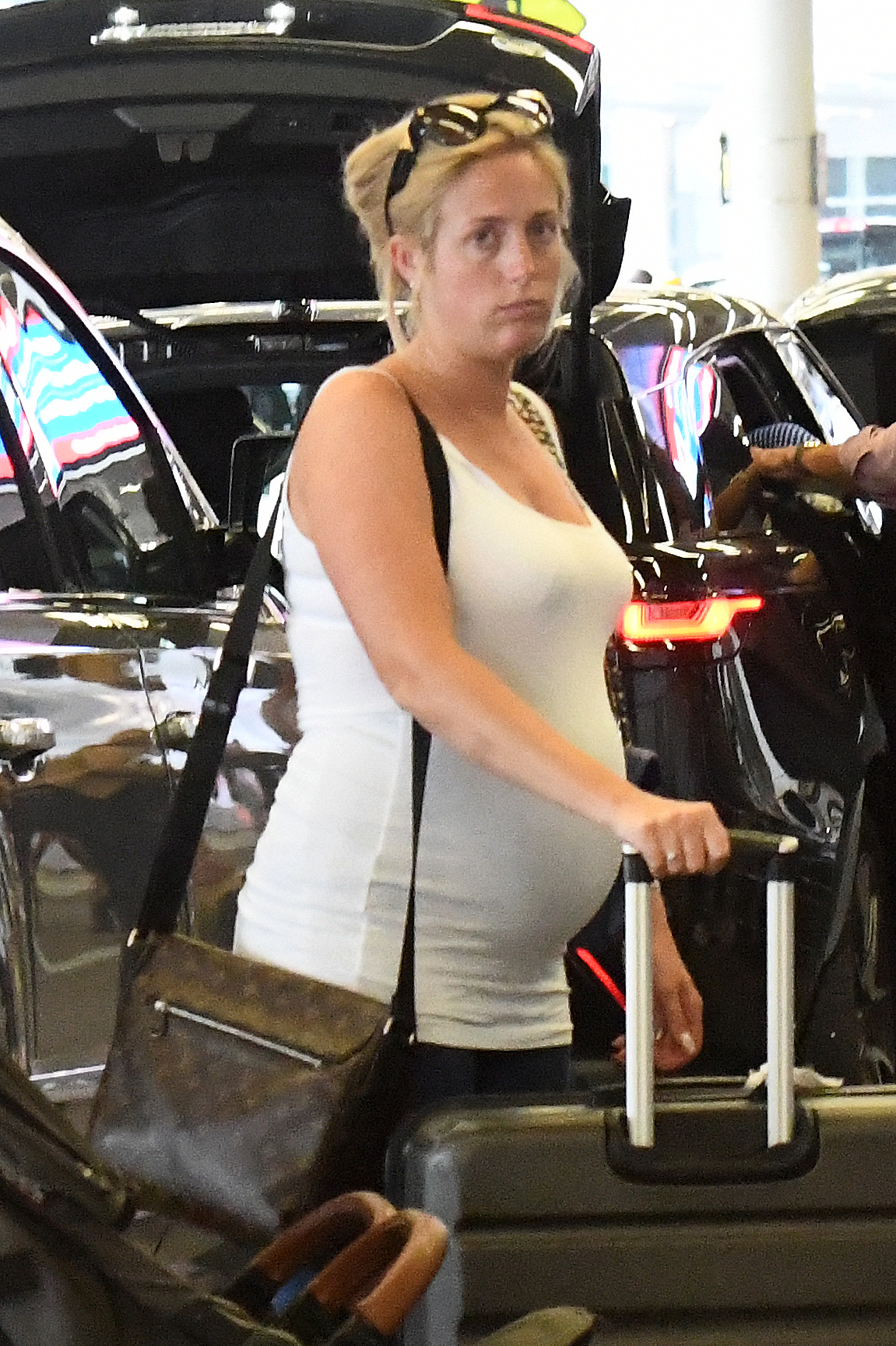 As Paris slowly unloaded the children, who were piled inside the large car, the champion boxer set to work organising their many bags.

The mum-of-five appeared tired as she pushed a double pram, wearing a white t-shirt, leggings and an over-the shoulder bag.

Keeping it causal, she pulled her hair back into a messy bun and accessorised with some oversized sunglasses, going make-up free.

Meanwhile, husband Tyson – who is set to take on Deontay Wilder in their trilogy bout on July 24, donned black shorts, a white top and sunglasses. 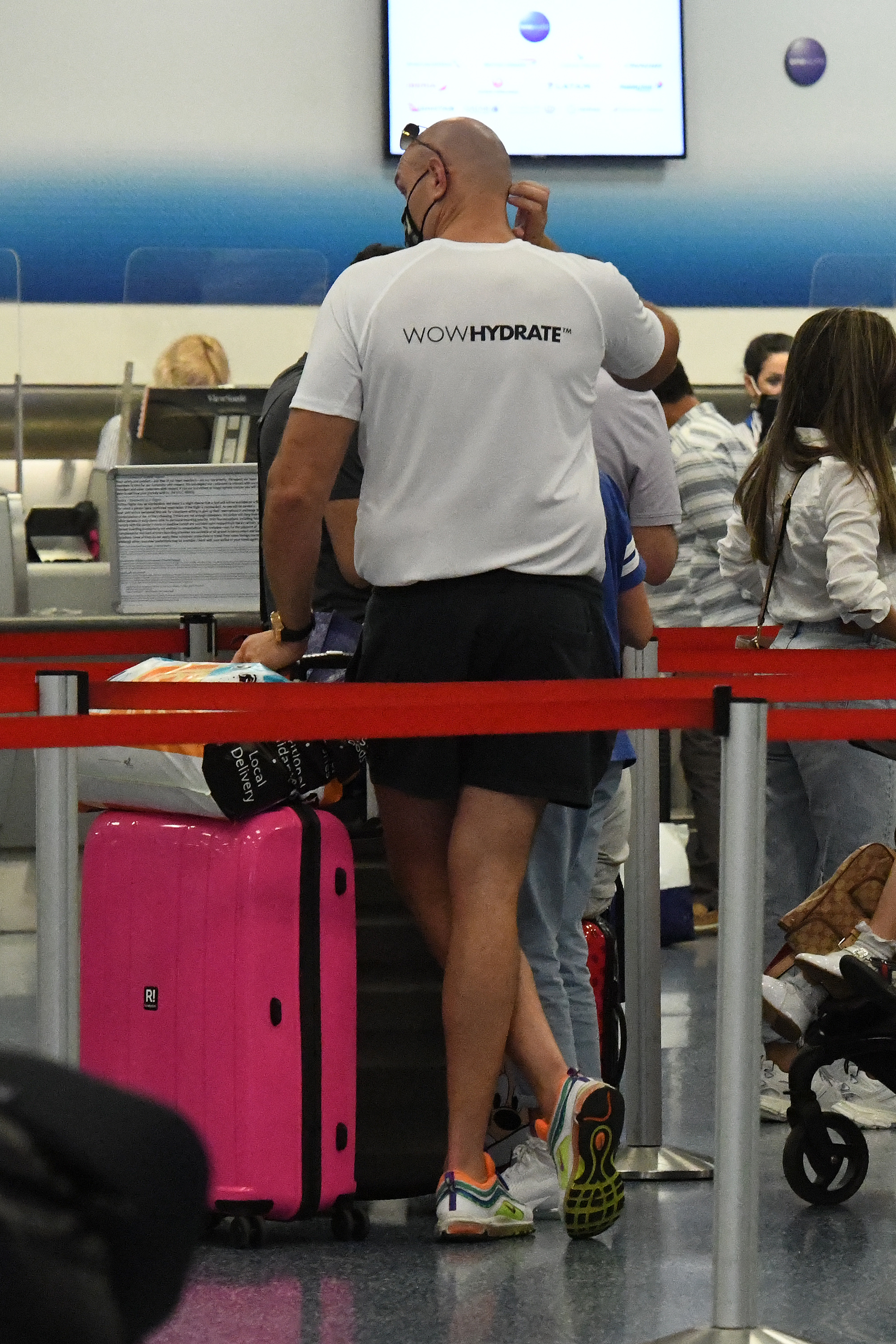 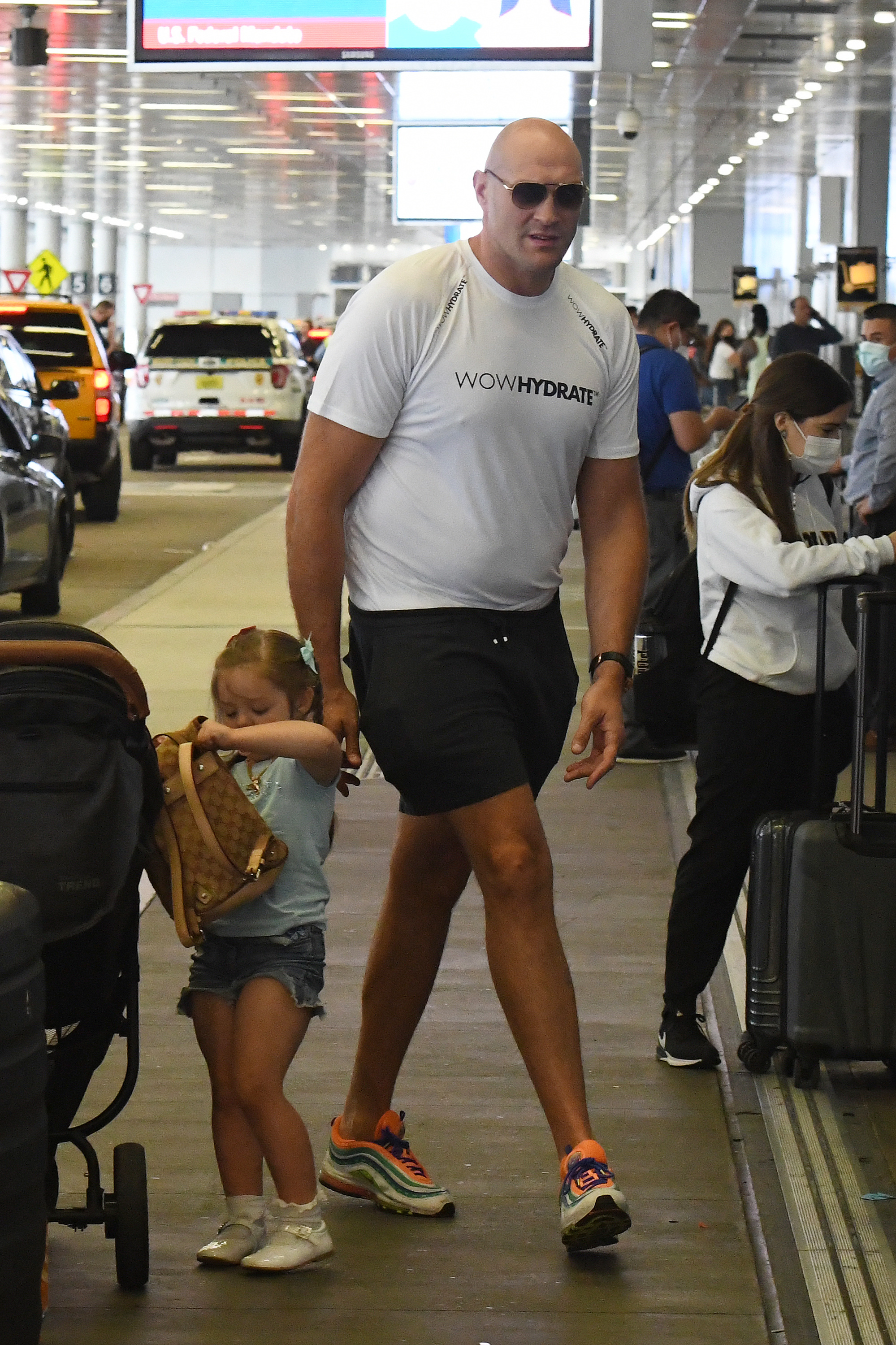 Shooting a desperate look towards the camera, Tyson and the family hurried inside to check in their suitcases before getting on a plane.

Tyson set up shop in sunny Miami earlier this year ahead of his long-awaited return to the boxing ring.

The WBC king escaped the drab and dreary weather in Morecambe last month, flying out to Las Vegas to train with coach Sugarhill Steward. 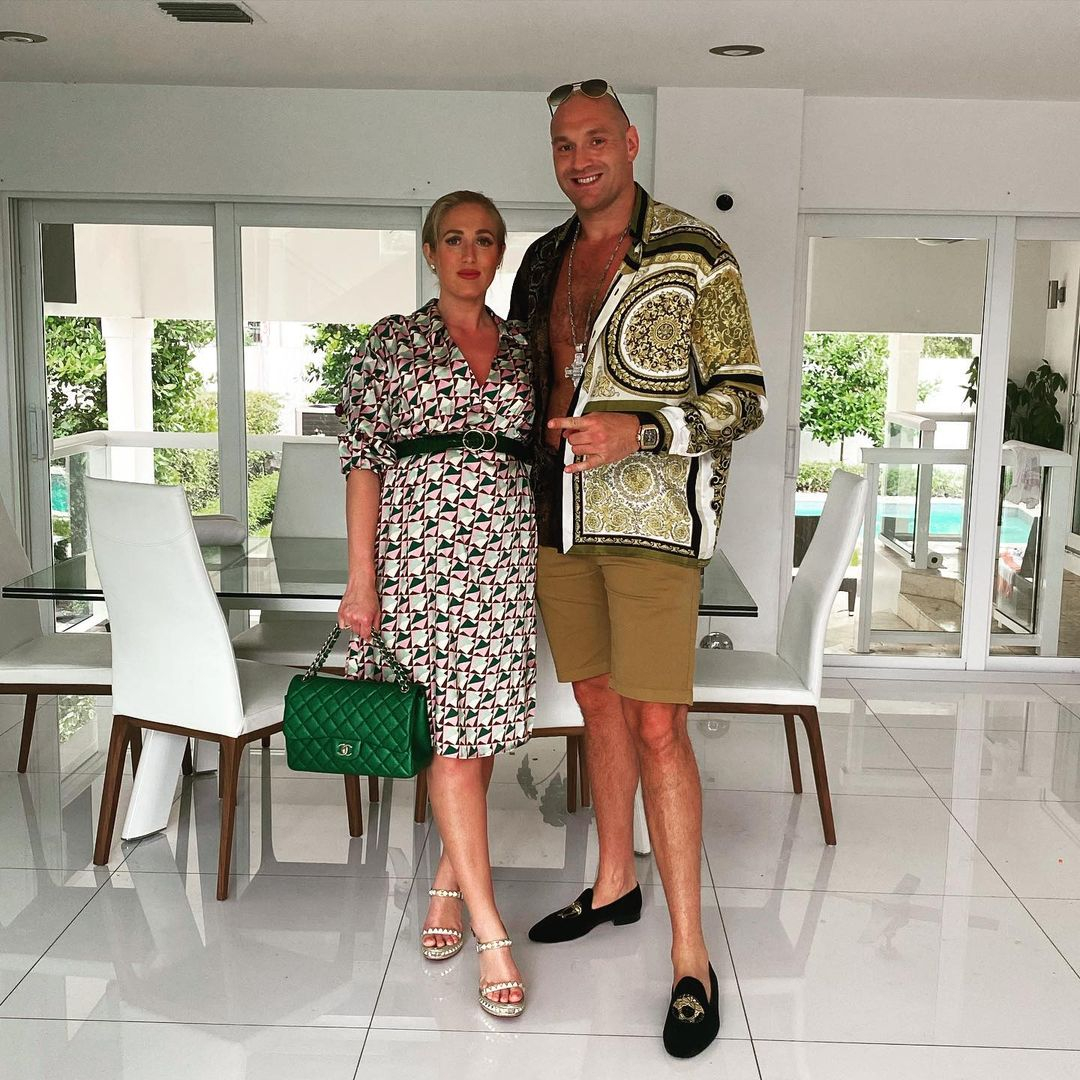 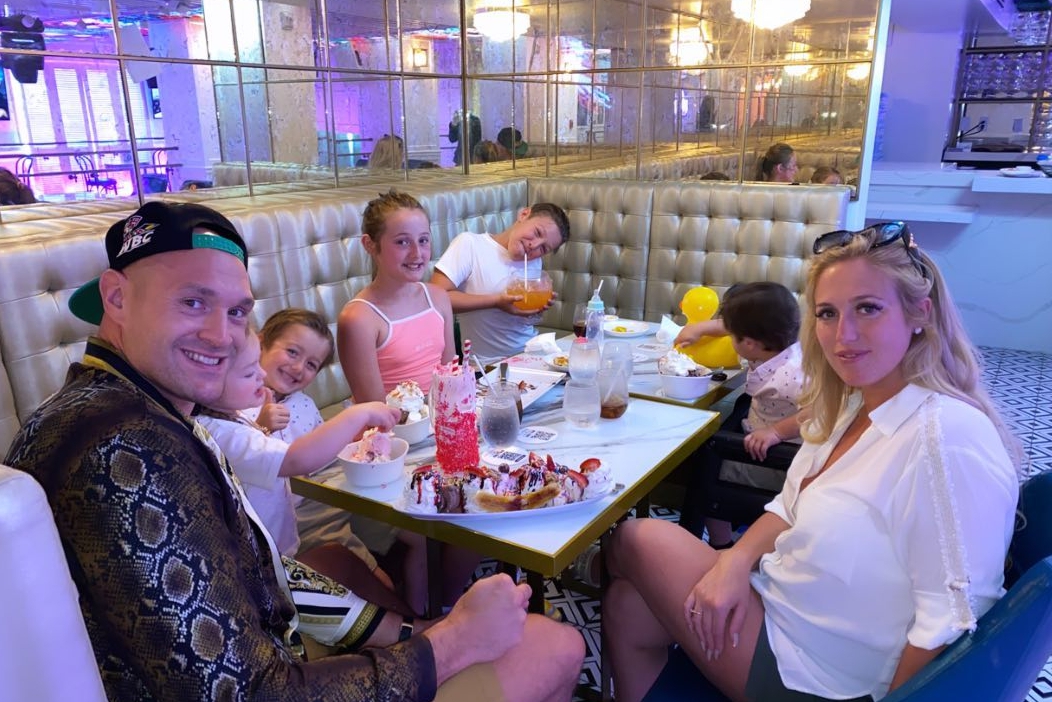 The Gypsy King made Miami his home away from home after travelling to Texas for Billy Joe Saunders' showdown with Canelo Alvarez.

Before the arrival of his wife Paris and four of their five children, Fury and his brother Tommy made the most of the sun by relaxing at the beach.

Tyson was seen surrounded by women and having sun-tan lotion rubbed into his arms and legs in a series of scandalous hands-on snaps.

Not long after, wife Paris was spotted without her wedding ring as fans worried for their marriage during the time apart. 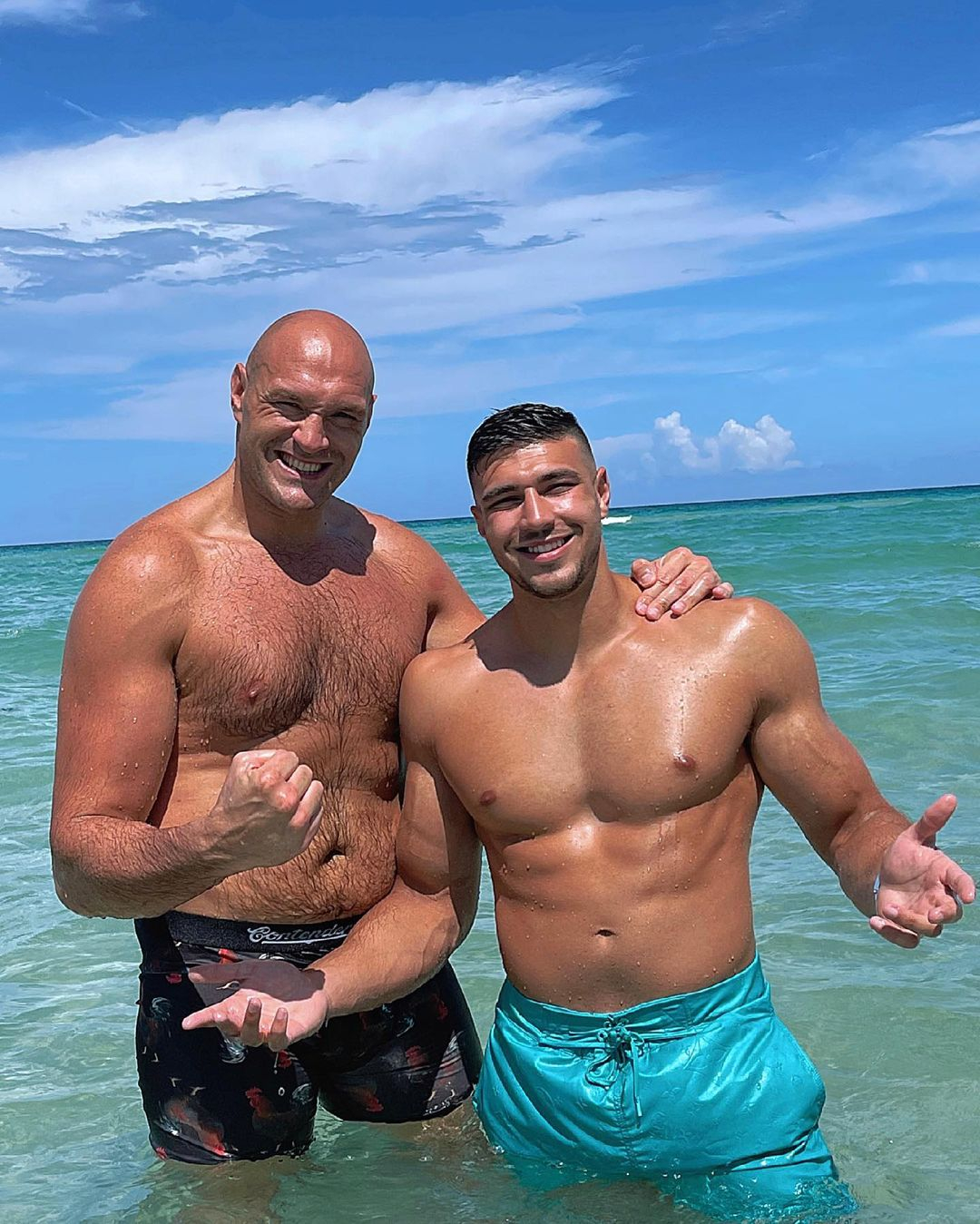 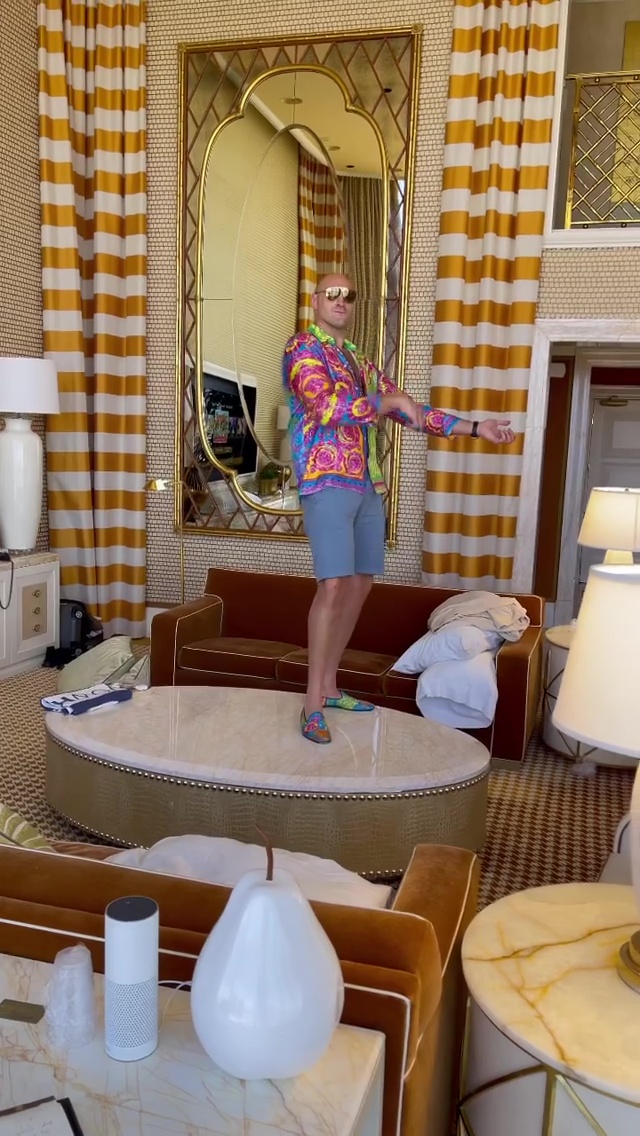 But proving there was nothing to worry about, the Loose Women panellist soon joined her husband – alongside their children – for more fun.

The pair, along with Fury's first-born child Prince John James, also enjoyed themselves by attending a number of the city's swanky restaurants.

Dotting dad Fury also took Prince John James to a WWE event, where he was given the VIP treatment and met a number of wrestlers backstage. 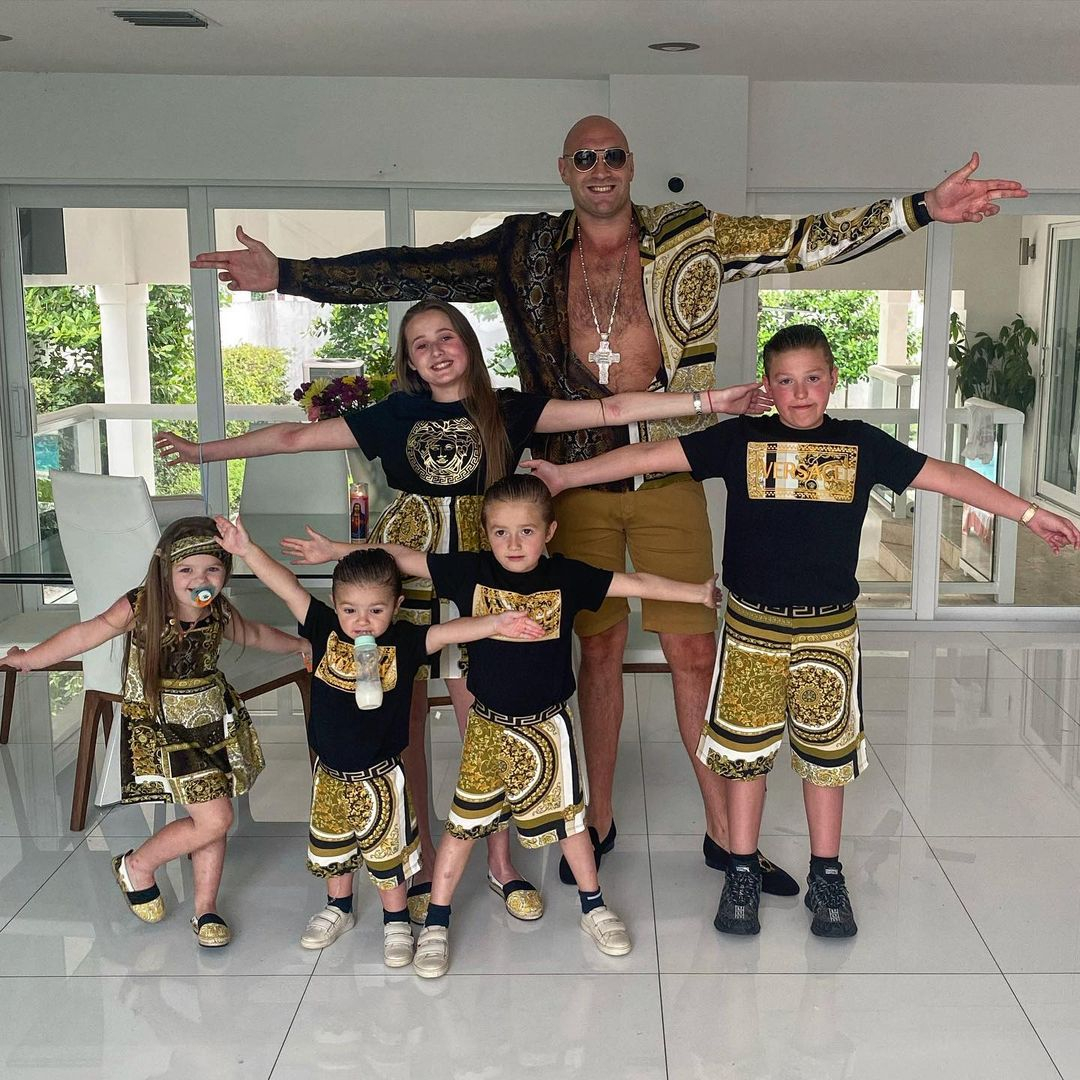 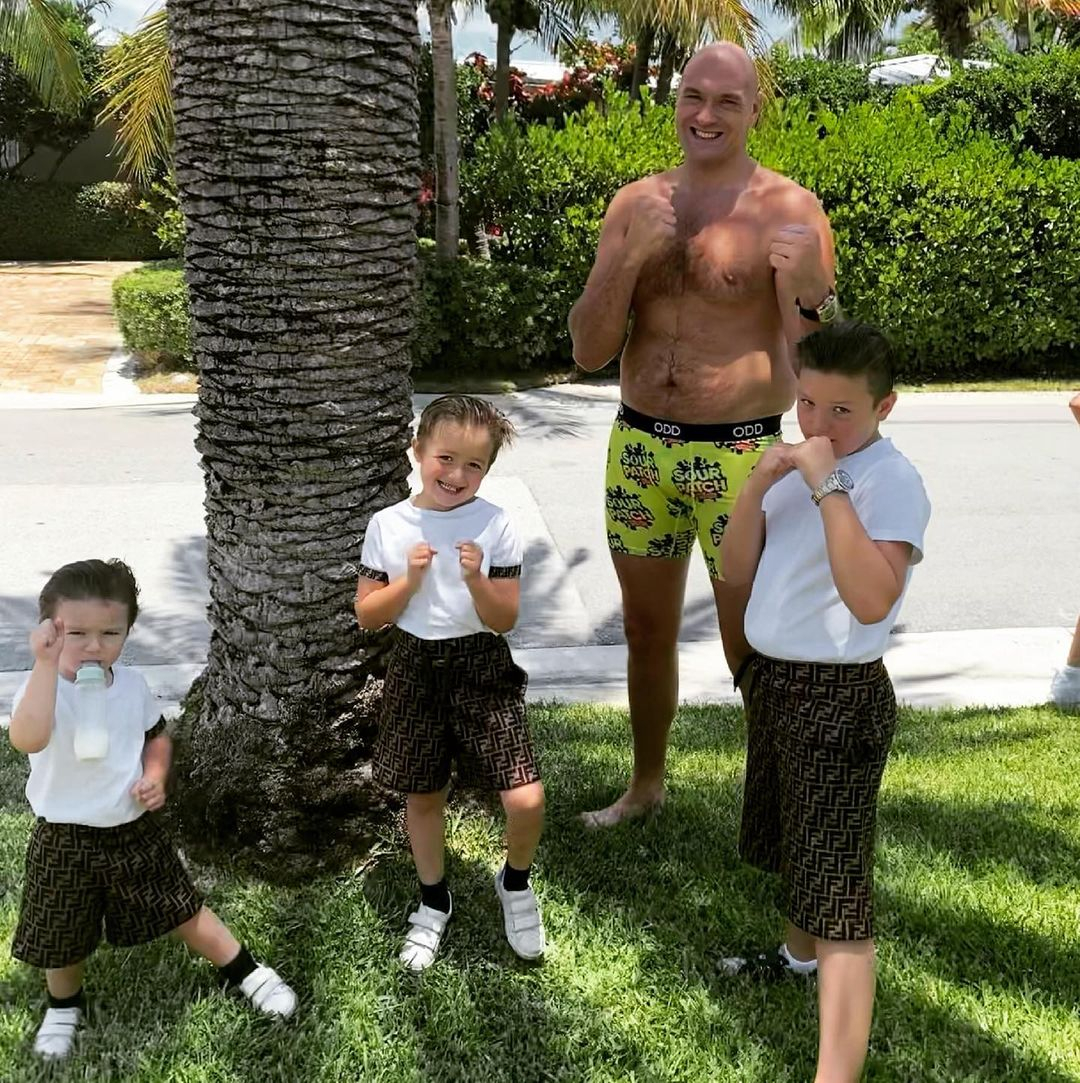 The three future Gypsy Kings mimicked dad Tyson by putting their fists up as they appeared to follow in his footsteps early.

Last weekend, the star took his family out for a day out at the NASCAR before breaking out into song on live TV.

Wearing a black AC/DC t-shirt, blue shorts, hi-tops and a white cap, Fury posed for photos in a giant hangar full of aeroplanes.

He hinted he was looking to buy his own private jet as he dropped hints in an Instagram caption, detailing he was "plane shopping".

Tyson also shared plenty of clips from the NASCAR at Charlotte Motor Speedway in North Carolina.

He also caught up with NFL running back star Christian McCaffrey as well as British actor Clive Standen.