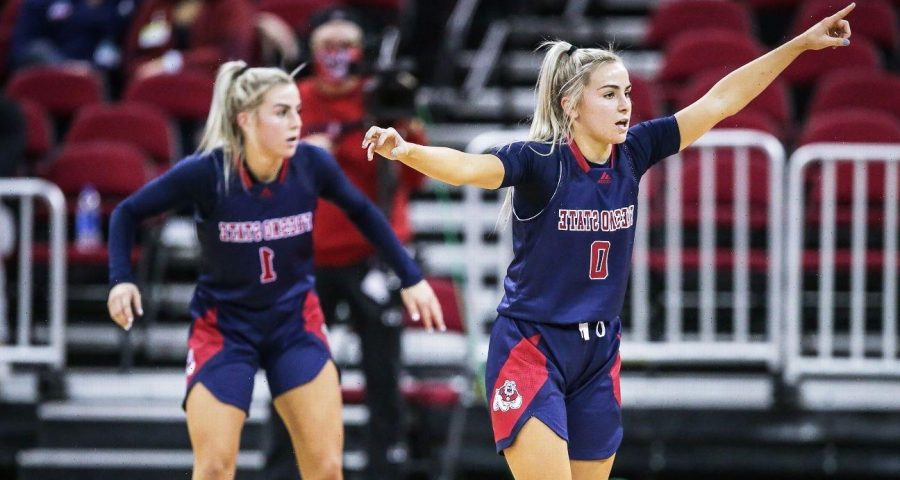 Hanna and Haley Cavinder waited for only a few minutes after the clock struck midnight before taking advantage of the new opportunities for college athletes to cash in on their fame.

The twin sisters, who play for Fresno State’s basketball team and entertain millions of followers on social media, flew to New York on Wednesday to sign their first major endorsement deal. They are now spokeswomen for Boost Mobile with plans to promote the wireless telecommunications company in a variety of ways in the coming year. NCAA rules changes and state laws that went into effect July 1 opened the door for college athletes to sell the rights to their names, images and likenesses for the first time.

“It was really exciting that such a known company wanted to work with Hanna and me,” Haley Cavinder said. “… This is a big switch for all student-athletes. Being able to use your name, image and likeness is something we all deserve, and I’m really thankful the NCAA is finally passing this.”

Boost CEO Stephen Stokols told ESPN that the company has a list of 400 college athletes it hopes to partner with in the future. He said the Cavinders will be part of a national advertising campaign, but he’s interested in the appeal that many college athletes have on a local level. He said deals could range from annual contracts worth large sums of money to in-kind deals where Boost provides athletes with free cellphones and service plans in exchange for promoting the company on social media.

“A lot of these guys are local heroes,” Stokols said. “We think it’s a big opportunity to get regional and local with relevant names in those markets. …We want to be one of the biggest companies embracing [the college-athlete marketplace] early. We hope to play a role in helping to shape it. There is a lot of gray area that will hopefully be more defined a year from now.”

The Cavinders plan to connect with more companies and announce other partnerships within the next couple days. They also plan to monetize their popular social media feeds and start selling branded merchandise in the near future.

The twins are among the first college athletes to announce endorsement deals under new NCAA rules. The wide range and scope of deals coming to light Thursday showcase the myriad opportunities that creative college athletes will be able to profit from moving forward.

Here’s a small sample of some of the more noteworthy athletes, brands and campaigns announcing new ventures on the first day of a new era in college sports.

• Florida State QB McKenzie Milton and Miami QB D’Eriq King signed on as co-founders of Dreamfield Co., a business built to help athletes pursue speaking events, public appearances and other new opportunities. Milton and King will help promote the tech-based platform. They also plan to be among the first college athletes to create nonfungible tokens to sell to fans in the near future.

• Iowa basketball player Jordan Bohannon plans to celebrate his newfound independence with a paid appearance at an Iowa City fireworks shop this weekend. Bohannon, who was a leader of the #NotNCAAProperty group that pushed for more players’ rights during this year’s March Madness tournament, also plans to partner with a local cryotherapy company, monetize his podcast and start selling personal merchandise through an online storefront.

• Unilever plans to spend $5 million over the next five years in partnerships with college athletes promoting the deodorant brand Degree. A company spokesperson said it plans to spend equal amounts of money on male and female athletes that come from a diverse range of sports and backgrounds. Unilever will be relying on fans to help it find athletes with unique stories worth featuring.

• Runza, a restaurant chain based in Lincoln, Nebraska, announced Wednesday that it plans to offer a flat fee to the first 100 Nebraska-based college athletes who promote the company’s rewards program on their social media feeds.

• Former Notre Dame walk-on football player Mick Assaf says his company, Yoke, has onboarded hundreds of college athletes since midnight on Thursday. The Yoke app allows athletes to make money by playing video games with fans. Rates for athletes range from a few bucks for a game to a few hundred bucks for their biggest clients, such as NFL receivers Antonio Brown and Chase Claypool. Yoke expects to have several thousand athletes from a wide variety of sports and schools on the app by the end of the week.

• Marshall offensive lineman Will Ulmer will no longer have to use the alias “Lucky Bill” or pass up money when he plays live country music in venues near the Thundering Herd’s campus. Ulmer, who has been playing music since he was 8 years old, told ESPN he hopes to start making money by booking live gigs this summer. He said he previously wasn’t allowed to promote any of his shows.

Steve Kennedy, the founder and CEO of Atlanta-based Fans Meet Idols, hopes his startup lands its fair share of student-athletes who fit into what he calls Tier II — the players who aren’t as widely known as someone like former Clemson quarterback Trevor Lawrence but still have a fan following.

“We’re speaking to people and saying, ‘We’re trying to help you avoid the big letdown,'” Kennedy said. “There’s all this hype and we’re talking directly to the student-athletes, and they’re telling us that they’re buying into the hype and they’re expecting something to monetize their NIL in some shape or form. It comes down to this rude awakening that they’re going to find out that they don’t have enough social media followers or they don’t have a big enough brand yet.”

“You can’t get from 3,500 followers to 50,000 in less than a year,” Kennedy said. “It just doesn’t happen unless you get lucky and go viral. The schools are trying to help the student-athletes change that, but what do you do in the interim? The good news is the fans don’t care about the brand or your social media following. They’re fans of these student-athletes because of who they already are.”

Kennedy noted that his clients come from nine sports, including football, men’s basketball, volleyball, swimming and diving, women’s golf, baseball and men’s and women’s soccer. He said two-thirds of his clients so far are women. — Mark Schlabach

Stay tuned throughout the day for other notable endorsements as they are announced.