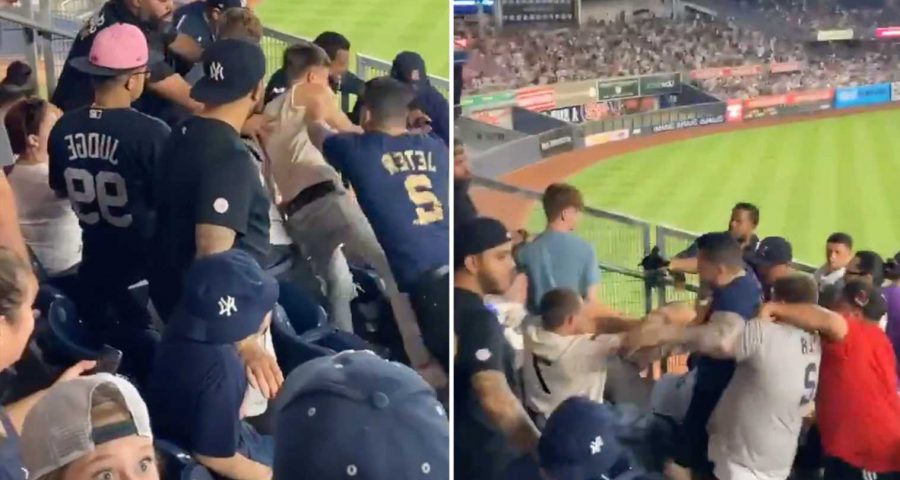 This is a start for the Yankees

Yankees and Red Sox fans stole the spotlight at the post-All-Star Break series over the weekend.

A group of Derek Jeter-clad Yankees fans appeared to outnumber a few Boston fans during a bleacher brawl that was captured on camera during the Bronx Bombers’ 3-1 win on Saturday.

Multiple bystanders attempted to break up the scuffle before stadium security appeared to escort a Yankees fan, in a No. 99 Aaron Judge t-shirt, out of the section.

Meanwhile, another Yankee fan, sporting a blue No. 2 Jeter tee, continued to throw consecutive punches before being held back.

It’s unclear if police were called or legal action was taken.

The altercation wasn’t the only controversial fan moment of the game.

A Yankees fan was ejected after throwing a ball that hit Red Sox left fielder Alex Verdugo — who wasn’t happy about being pegged, whatsoever.

The culprit was later banned for life from all 29 MLB parks, a spokesperson said Sunday.

Red Sox manager Alex Cora deemed the fan act as “wrong,” and noted tensions were high inside Yankee Stadium during the rivals’ game.

“[Saturday] was one incident. Somebody made a bad decision throwing a baseball. … One thing for sure, when I went out there, it was loud and it got nasty, from both sides,” Cora said.

“I just needed to calm [Verdugo] down. That was the whole reason I took everybody off the field.”