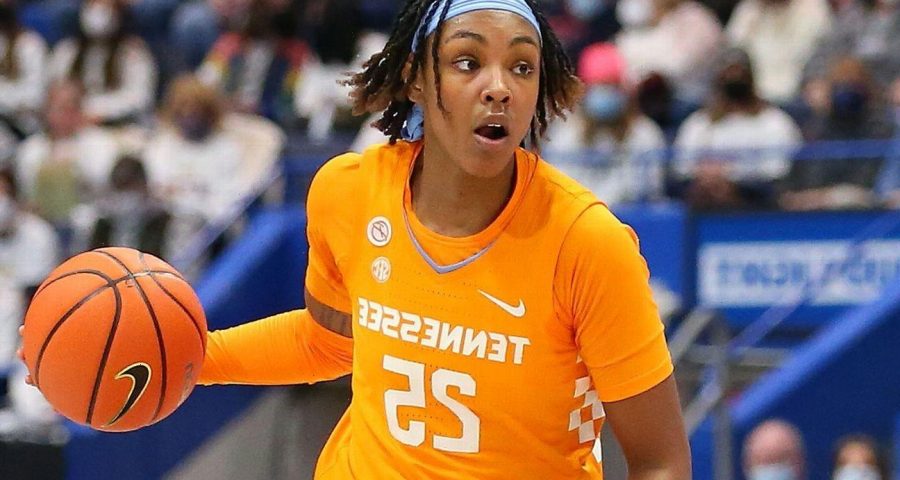 M.A. Voepel covers the WNBA, women’s college basketball, and other college sports for espnW. Voepel began covering women’s basketball in 1984, and has been with ESPN since 1996.

The women’s college basketball season is launching earlier every year. The 2022-23 season opens Monday, but the first week of November was once known for coaches universally lamenting, “We’ve just got to get a lot better,” as they prepped for exhibitions.

This year, Tennessee fans were raring to go in August. The No. 5 Lady Vols start the season Tuesday with an immediate test: at No. 14 Ohio State.

Monday’s schedule includes 16 games that involve top 25 teams, including No. 1 South Carolina, the defending national champion, which faces East Tennessee State (8:30 p.m. ET, SEC Network). The Gamecocks are favorites to repeat their title, and South Carolina star Aliyah Boston is expected to sweep the major national awards, as she did last year.

As always, there are several questions heading into the season, which will conclude at the women’s Final Four in Dallas from March 31 to April 2. One question is just how big a year it might be for the Gamecocks’ SEC rival Tennessee. We look at that and the other things we’re watching as women’s hoops tips off, and are joined by ESPN’s Charlie Creme and Alexa Philippou for preseason predictions.

Will Tennessee return to the Final Four in 2023?

It’s poignant to think that after superstar Candace Parker led the Lady Vols to back-to-back NCAA titles in 2007 and 2008, coach Pat Summitt had just four seasons remaining on the sidelines. Tennessee has been through a lot in the last 14 years, during which Summitt died in 2016 after a battle with early-onset dementia, Alzheimer’s type.

In that time, the Lady Vols had five Elite Eight losses, five early-round exits and two coaching changes. They watched UConn win six NCAA titles in that stretch, while Baylor and South Carolina each won two national championships and the Gamecocks moved to the top of the SEC.

Tennessee returned to the Sweet 16 last year for the first time since 2016, when they made the Elite Eight. Senior guard Jordan Horston returns after missing the postseason with an elbow injury, along with other impact players such as center Tamari Key. Forward Rickea Jackson is one of the nation’s top transfers. The excitement around Tennessee feels like the old days.

Tennessee will always celebrate its past, but the program and these players deserve to be looked at in context of the current competitive women’s hoops world. At one time, the Lady Vols’ success was determined by whether they made the Final Four. Now, being in the running for that is a more realistic measure. There’s good reason to think they will be in 2023.

It took an epic 91-87 double-overtime victory against NC State in the Bridgeport Regional final last season for UConn to extend its astonishing Final Four streak to 14 in a row. Once this streak is over, it’s unlikely we will see anything like it again.

Some thought it might end in 2012, the season after Maya Moore graduated. Then maybe in 2017, after the Huskies lost Breanna Stewart, Moriah Jefferson and Morgan Tuck, who won four consecutive NCAA titles. After Napheesa Collier and Katie Lou Samuelson departed in 2019, we can only speculate what might have happened in the 2020 tournament canceled by the COVID-19 pandemic, but the Huskies were 29-3 that season.

In 2021, led by freshman Paige Bueckers, UConn reached the Final Four in the NCAA tournament bubble in San Antonio. Bueckers had 27 points in last season’s Elite Eight victory, and then UConn beat defending champ Stanford in the national semifinals. The loss to South Carolina in the final was the first time UConn had been defeated in a NCAA championship game.

Bueckers and freshman Ice Brady are both out this season with knee injuries. Christyn Williams, Olivia Nelson-Ododa and Evina Westbrook have graduated and moved on to the pro game. Coach Geno Auriemma is concerned about depth. But sophomore Azzi Fudd could have a huge season, and other players such as juniors Nike Mühl and Aaliyah Edwards might make big jumps. It might be more of a challenge for the No. 6 Huskies to finish in Dallas this year, but nobody is counting them out.

Can a mid-major team advance to the Final Four?

The evidence of the past 20 years points to no; the last so-called mid-major to make it that far was Missouri State in 2001.

Huge concentrations of talent are still in the Power 5 and at UConn, a powerhouse that sits separate of the “mid-major” label despite, since 2013-14, being in the American Athletic Conference and then the remade Big East. There are some outstanding mid-major players. It’s just difficult to have enough of them to overcome what are typically low NCAA tournament seeds and especially difficult paths to the Final Four.

With home sites for the top 16 seeds in the women’s game, just getting to the Sweet 16 is a big accomplishment for double-digit seeds. Two of them did it in March, as two No. 10 seeds, Creighton and South Dakota, knocked off Iowa and Baylor, respectively, who were No. 2 seeds and hosts. The Bluejays went all the way to the regional final, where they fell to South Carolina.

No. 11 seed Princeton came close to the Sweet 16, too, upsetting No. 6 seed Kentucky in the first round before falling to No. 3 seed Indiana 56-55 in the second round.

In this year’s preseason poll, three mid-majors are ranked: No. 21 Creighton (Big East), the No. 23 South Dakota State (Summit League), and No. 24 Princeton (Ivy League).

Two of them start the season against each other Monday, as Creighton travels to South Dakota State (8 p.m. ET, ESPN3) in a game that could have implications for March. Princeton opens Monday vs. the Temple (5 p.m. ET, ESPN+).

How will these coaches adjust to replacing program stalwarts?

Last season, Nicki Collen had one of the more difficult takeovers ever, as she followed Kim Mulkey at Baylor. Mulkey won three NCAA titles and dominated the Big 12 for the last decade of her time at Baylor. Plus, she didn’t retire, she left to coach the LSU Tigers. Collen has been frank in acknowledging it has taken time to get past Mulkey’s shadow in Waco, Texas.

Stringer, Blair and Turner Thorne were an extremely successful coaching trio, but also seemed ready to move on in their lives. It means new eras at their respective programs, and the coaches who follow them can feel like the fresh start is going to be embraced by players and fans.

Taylor was SEC coach of the year in 2021 with Georgia, so she already knows the league as well as anybody. Washington was Penn State coach for 12 seasons, from 2007 to 2019, and she is well-versed in the Big Ten.

Things are a little different for Adair, whose life and career have been on the East Coast before this move. She comes to Tempe after five years with Delaware, who made the NCAA tournament last season.

Other coaches in new spots to watch this season include Dawn Plitzuweit, who takes over for retired Mike Carey with West Virginia, and Amaka Agugua-Hamilton, who replaces Tina Thompson at Virginia.

What will players, coaches and fans think of the new two-regional system?

Starting this season, the NCAA will do something completely different with the regionals: there will be two instead of four. When the NCAA first announced this in 2019, it said the reason was to try to maximize attendance and commit to a better overall experience for student-athletes. It’s notable, though, that this decision was made two years before the NCAA was exposed in 2021 with the obvious inequities between the men’s and women’s tournaments in COVID-19 bubbles in Indianapolis and San Antonio.

Would the NCAA have made the same decision to go to two regionals after essentially being shamed for shortchanging the women’s tournament in 2021? We can only speculate. But this is the format for now, with two regionals assigned out through 2026. This year, they are in Greenville, South Carolina and Seattle.

Obviously, the point of the traditional four regionals is to make them, quite literally, “regional” and spread across the country for attendance and television window purposes. Two regionals on opposite coasts means the Central and Mountain time zones are left out entirely. In fact, there are only two regionals in either of those time zones over the next four years: in Birmingham, Alabama, in 2025 and Fort Worth, Texas, in 2026, both Central time zone cities.

The NCAA will be under some pressure to prove that this format change really is for the best for the sport, the teams and the fans. We will see how it plays out.

Charlie Creme: Caitlin Clark will be the national player of the year. Dethroning a reigning player of the year is rare, and Aliyah Boston remains the better player. However, Clark is more flashy and her numbers are staggering. If she and Iowa get off to a quick start, the mainstream media attention that Clark began to receive last season will build even earlier. An avalanche of momentum behind her candidacy will be hard to overcome if Clark has a season similar or slightly better than last year. So this is really more of a prediction of how others will vote, rather than how I might.

Alexa Philippou: After going wire-to-wire as the top team in the country last season, South Carolina will fall out of the No. 1 position at some point in 2022-23 — and maybe even double their total loss count from 2021-22 (two). Destanni Henderson’s steadiness at the point will be missed early on, particularly as the Gamecocks face Maryland and Stanford in November before delving into SEC play. Zia Cooke will emerge as a more consistent threat to help out Boston, while Kierra Fletcher and/or Raven Johnson will settle into the point guard roles. Even if the Gamecocks look vulnerable during the regular season, behind their experience and Dawn Staley’s guidance they’ll still put the pieces together in time to win the national title.

M.A. Voepel: For the first time since 2008, UConn will fall short of the women’s Final Four. The loss of four players (through graduation or injury) among the Huskies’ top six scorers from last season will be something the team works to overcome. UConn will still be Big East champion, but will lose in the NCAA Elite Eight.

Which teams reach the Final Four?

Which team wins the NCAA title?

Who will be the national player of the year?

Who will be coach of the year?

Who will be freshman of the year?