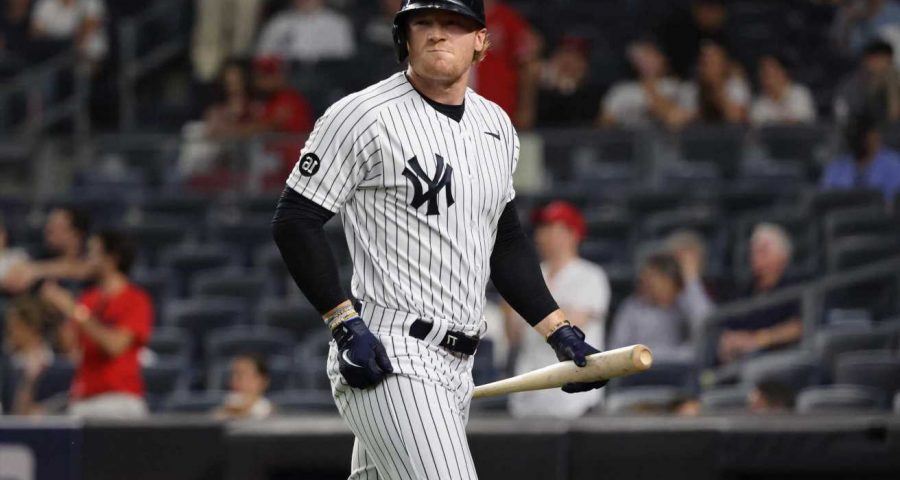 Yankees close to getting one of their starting pitchers back

Yankees win an absolutely wild one

KANSAS CITY, Mo. — Clint Frazier began a rehab assignment with Low-A Tampa on Tuesday as he tries to come back with the mystery ailment that has sidelined him since he left a game on June 30.

Manager Aaron Boone said the Yankees have been unable to determine exactly what has caused Frazier’s issues, testing for concussion-related symptoms, as well as vision issues.

“I know he’s in a pretty good place,’’ Boone said before the Yankees faced the Royals on Tuesday at Kauffman Stadium.

But when asked if there was even a spot for Frazier on the roster after the addition of Joey Gallo, Boone didn’t say yes.

“We’ll see,’’ Boone said. “That’s a ways off to even think about. … I’m not gonna speculate. Our roster is as fluid as it could possibly be. Every time I’m making a plan for the next few days, something gets turned upside down.”

Boone did note: “We know what Clint is capable [of] and his talent. He needs to get games under his belt.”

Anthony Rizzo, one of four Yankees currently on the COVID-19 injured list is “doing a little better,” according to Boone.

“He’s feeling OK,’’ Boone said of Rizzo, a cancer survivor who said publicly in June that he hadn’t been vaccinated. “He has some symptoms.”

Gary Sanchez had symptoms for “several days,’’ according to Boone, but “felt really good [Tuesday]. … He turned a corner the last couple days.”

As for Gerrit Cole and Jordan Montgomery — also out with COVID-19 — Boone said they might rejoin the team on the road trip this week and possibly will throw bullpen sessions this weekend, when the Yankees are in Chicago to play the White Sox.

“We’ll evaluate where they are as far as when we insert them back in [the rotation],’’ Boone said.

Luis Severino (elbow surgery, strained groin) is scheduled to make another rehab start Friday and could be back with the Yankees next week, while Corey Kluber is due to make his first rehab start from a strained shoulder on Thursday.

Boone said there was no update on Aroldis Chapman, on the IL with left elbow inflammation.

Not generally known for their speed or prowess on the basepaths, the Yankees lead the majors with 20 stolen bases since the All-Star break.

The Yankees have already used 57 players this season, their second-highest total in history (58 in 2014).

Andrew Velazquez started at shortstop for a second straight game after being promoted from Triple-A Scranton/Wilkes-Barre on Monday. The Bronx native went 0-for-4 in his Yankees debut Monday.