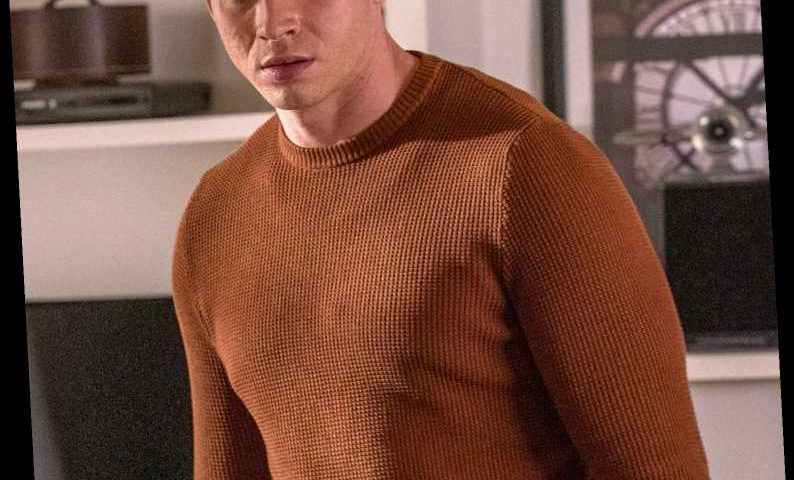 9-1-1 fans always knew Buck had been on a journey that led him to Firehouse 118, but no one could have imagined that journey would be quite so literal.

After last week's bombshell that Buck (Oliver Stark) had a brother, Daniel, who died shortly after he was born, this week's episode, titled "Buck Begins," revealed much more of Evan Buckley's origin story and his childhood with his sister Maddie (Jennifer Love Hewitt).

Turns out, Buck was created "for parts," as he says, after Daniel was diagnosed with leukemia. Later, after Daniel's death, Buck struggled for his parents' attention as they grieved, eventually discovering that taking a hard tumble — from his bike, from his skateboard, and so on — could provide him with some of the affection he craved.

As Buck grew up, the antics got worse and more dangerous, and his parents became more and more detached. Maddie wasn't around as much to help patch him up or make him feel better — she was in her abusive relationship with former husband Doug — and eventually, she handed him the keys to her Jeep and told him to leave. For a brief moment, she was going to join him, but the threat of her departure led to another beating from Doug, and Maddie left a note for Buck to journey on without her. And journey he did! He made his way across the country, settling all over and taking odd jobs (including in construction, as a bartender and as a ranch hand). But after meeting a group of guys during one of those bartending gigs, he headed to Los Angeles with them, entered the fire academy, and found his true family in the 118.

PEOPLE spoke to Stark, 29, to take us through some of those twists and turns — as well as the pressure of the spotlight of one of the show's "Begins" episodes.

PEOPLE: It took four seasons to get Buck's "Begins" episode. Were you itching for it?
OLIVER STARK: Oh, I was not itching for it! I was quite apprehensive about the whole thing because the past "Begins" episodes have been such good episodes. So my anxiety crept in, and I was sure that mine would be the one that messes up the strong run of "Begins" episodes and is a disappointment. So I was cautiously optimistic about it, but also there was certainly a level of being intimidating. But once I heard what the story was, I started to get much more excited about it, and get ready to jump into the work.

Do you have any siblings, and have those relationships helped inform Buck's with Maddie?
I have an older brother, and our relationship is not the same as Buck and Maddie's in any sense. We've never really had much in common. We don't have any issues, we very much love each other, but we're certainly not, at this moment in time, nor have we been in the past, been as close as Buck and Maddie. In fact, I think it's the opposite: It's more that the Buck and Maddie relationship has helped me in my own life realize what a lovely thing a sibling relationship can be.

How has Buck's journey resonated for you personally?
Playing this character has been such a lovely experience for me, especially because I feel like our lives are kind of mirroring each other. Even if we go back to season 1, when he was just joining the firehouse and kind of finding himself. It was a very transformative time for me as well, being a part of a new show, and my first time really being such a big part of a show, so we've kind of grown together throughout the seasons. I feel extremely connected to the character — and that means all the trauma that he is going through. There's certainly a level of me having to process that at the same time, and it's just been a really quite cathartic experience for me. Was there a moment in this episode that really struck a chord with you?
One of the main things that I have learned throughout the show and something I only had maybe base-level understanding before was how much of a found family a firehouse is. You expect that they trust each other and need to enjoy each other's company to a certain level, but throughout the show and throughout getting to spend time with real firefighters, both on set and off set, understanding that it truly is a real-life family. And as we see echoed in the episode towards the end, where Buck needs saving, they will run into that fire for each other without a second thought. And to know that they'll do that for each other, which then means that they can do that for civilians, I think is a really heartwarming and hopeful thing to be reminded of.

How has it been playing a first responder during this time where everyone is so much more keenly aware of how important they are?
We are consciously aware of first responders, and the huge job that they're doing, which I think makes it even more important for us to remind the audience that, even though they are extremely brave men, women, and individuals, they also have a lot to deal with in their own lives; that they, as much as possible, put that aside so that they can come and help us. Because I do think it's easy to forget that and just see them as these superheroes. And in reality, they're not superheroes; they're people like myself, like you, who just do extraordinary things.

Has the show changed how you feel when you walk by a firehouse?
I have not been able to walk by a firehouse since starting the show without peering in and trying to come up with who's friends with who and making up these relationships in my head. I've just become a little bit obsessed with it. Earlier this season, Buck revealed the "woman" he was quietly spending time with was actually a therapist, not a love interest. How important was that for you and for the show to be showing a man actively working on his mental health?
I think it's a really important message for the show to highlight that anybody can benefit from going to therapy. I think there's, or at least there has been in the past, a stigma attached to it, where you go to therapy when something is maybe very wrong. But in actual fact, it can be helpful whatever you need to process. And then for a character like Buck, who, if we look back in television series gone by, quite stereotypically might have been this hot-headed, cocky, macho firefighter who doesn't really have any sensitive emotions, or at least doesn't show those emotions. But to have a character who does wear his heart on his sleeve and is vulnerable to show that you can be all of those things at the same time, I think is a really important message in combating things like toxic masculinity.

How has Buck changed you?
I like to think that I'm much braver now, because Buck is so incredibly brave and always puts himself on the line for other people. Thankfully, that hasn't been tested, but I like to assume that I now have some of that in me, and if something happens, I would be the person with a plan and spring into action. And aside from his work, I think just his openness and the fact that he does wear his heart on his sleeve, I do feel like I have become more in touch with myself through playing him.

So what's next for Buck?
By the end of the episode, I think Buck finds himself on a much healthier path, and a path to healing, whether that be within himself or through his relationships. As traumatic and as painful as the events of "Buck Begins" and the previous episode were, I think he can start to look ahead now, and there's certainly some lighter stuff in his future. He's going to continue to have struggles, because nothing goes away overnight, but I do think he's going to find himself in a much better place.

Might a new love interest be among those lighter things?
He's going to put himself out there, not immediately to much success, but, hey, dating is difficult, as he is very much going to find out in a few episodes.