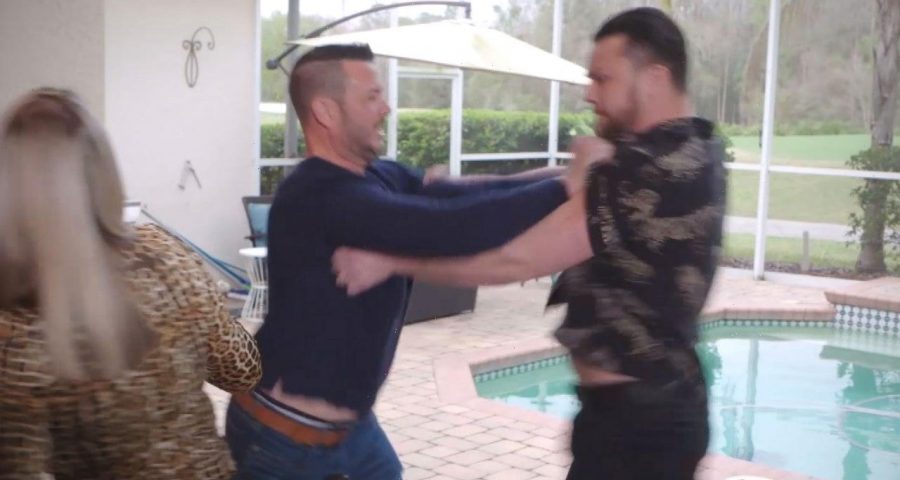 Andrei’s tense relationship with his in-laws is finally reaching its breaking point on Sunday’s episode of 90 Day Fiancé: Happily Ever After?. In this exclusive clip from the last episode before this season’s two-part tell-all special, Andrei and his brother-in-law, Charlie, get into an ugly physical altercation.

Andrei has been fighting with his wife, Elizabeth’s, siblings all season long after joining his father-in-law, Chuck’s, property management business. Elizabeth’s siblings — sisters Becky and Jenn, as well as Charlie — feel that Andrei is manipulating their father and pushing them out of the family business.

During last week’s episode, Jenn threw cake in Andrei’s face at Andrei and Elizabeth’s daughter’s birthday party, and in this clip, the family reunites after the shocking moment at a barbeque Chuck is throwing. Jenn says Chuck hasn’t spoken to her since the incident, and Chuck acknowledges that her actions upset him. The talk then once again turns to Chuck’s children thinking Andrei is using him and pushing them out of the business.

“No, you’re f**king jealous, that’s what you are,” Andrei responds when Becky calls him out. “Just put them mouths shut. What the f**k are we doing?”

Not surprisingly, Jenn once again goes after Andrei and tells him to shut up, in turn, prompting Elizabeth to tell her not to talk to her husband that way. Clearly, nobody wants to be at the family gathering, which is only made worse when Charlie appears. He arrives already riling Andrei up, shouting, “Look who’s back! Call the cops!”

Not surprisingly, Andrei — who has a long history of bad blood with Charlie — is incensed. After telling Charlie to shut up and sit down, Charlie tells him not to tell him what to do. Things escalate from there when Andrei declares that Charlie is “not running the place.” The two begin shoving one another, and Andrei puts Charlie in a headlock and wrestles him to the ground. As Chuck and a member of production attempt to break them up, Elizabeth is heard panicking and shouting in the background.

ET spoke to Andrei and Elizabeth in June, and he explained why he didn’t feel bad about asking for Chuck’s help financially, including a $100,000 loan.

“Everybody did that to Chuck,” he said. “Everybody got the same treatment, like, he’s been helping his sons and his daughters in all kinds of ways, giving them money … they just don’t want to share. The thing is, they’re selfish. The fact is they all have their share of the pie over here … and now that I’m asking for something in the same manner, they’re like, going nuts, because they’re thinking, like…  maybe he’s going to take over, which ultimately, will probably happen.”

Andrei told ET that he was going to “expose” Elizabeth’s siblings after finding some dirt on them, which Elizabeth had no issue with.

“I mean, if you walked into it, that’s on you,” she said about how she feels about Andrei doing an “investigation” on her siblings. “They did a lot of things to piss me off and at this point, I’m just kind of like, you guys are asking for it because he told them, ‘I’m warning you.'”