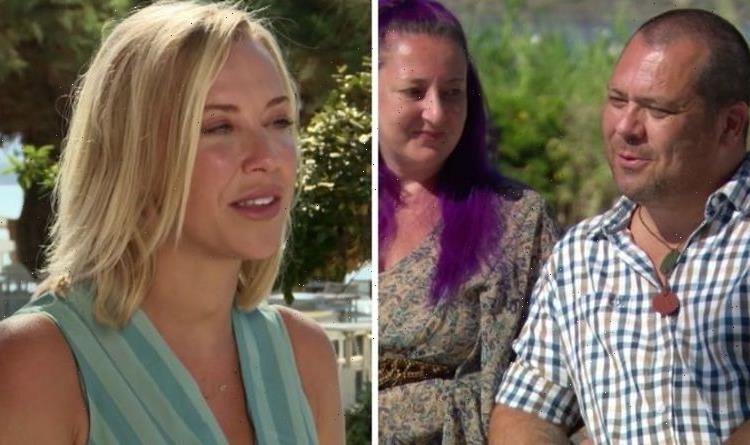 A Place in the Sun: Woman says property ‘feels like an estate’

A Place In The Sun viewers saw presenter Laura Hamilton struggle to find Susan and Matt a permanent home on the Greek island that would accommodate their much-loved dog Rufus in Thursday’s episode. With a budget of £100,000 and impeccably high standards, Laura admitted the search was tougher than she anticipated.

Married couple Matt and Susan spent their honeymoon on the sun-soaked island of Crete and recently decided they want to move there permanently with their pet pooch.

However, as Matt was involved in some serious motorbike accidents which have damaged his spine, the couple wanted a bungalow so there would not be any stairs to climb.

Matt explained: “My spine has been badly damaged, and I am held together with nuts and bolts and screws.”

Susan said the reason she and Matt wanted to move to Crete was within a day of being on the island, Matt was “pain-free” due to the warm climate.

Ahead of looking at their first property, the couple told Laura their budget for a home was £100,000.

They did, however, admit they would potentially increase their budget to £110,000 if the ideal home was on the market.

Laura explained: “It is going to be a challenge finding you a home as prices are about £150,000 here.”

The couple also wanted to find a property suitable for their “four-legged baby” Rufus, so they wanted a secure garden he couldn’t escape from.

Speaking to Laura about her expectations for a Cretian home, Susan said: “We have a little dog Rufus so we need to have some outside space for him, two double bedrooms, as we want to have friends and family staying.”

She also said she enjoyed cooking, alongside her husband, so a good kitchen was another important factor.

Laura proceeded to take Susan and Matt to the first property, which was on the market for £97,000, but Matt said it looked “too much like a box”.

They also thought the home, which was built in 2006, was more like a holiday home than a forever home.

Susan and Mark were also unimpressed with the second property they looked around as it had no air conditioning and was “not secure enough for the dog”.

When it came to exploring the third property, Lauren was starting to feel disheartened.

Laura sighed: “I think this is going to be tougher than I first thought.”

After a shaky start, Lauren told the couple: “I feel so frustrated as we had such a negative start with the stairs. I feel that we haven’t found you the right property just yet. With only one sort of contender in the bag, this search is getting tough.”

However, the presenter struck gold with her fourth property which the couple said was “leaps and bounds” ahead of the other options as they adored the mountain view.

They went on to view the fifth property, but their hearts were with the fourth property, so they told Laura they wanted to have it structurally surveyed before putting in an offer.

Since filming a survey was arranged, and Matt and Susan are waiting for the results of the structural report.

A Place In The Sun airs on Channel 4 weekdays at 3pm.