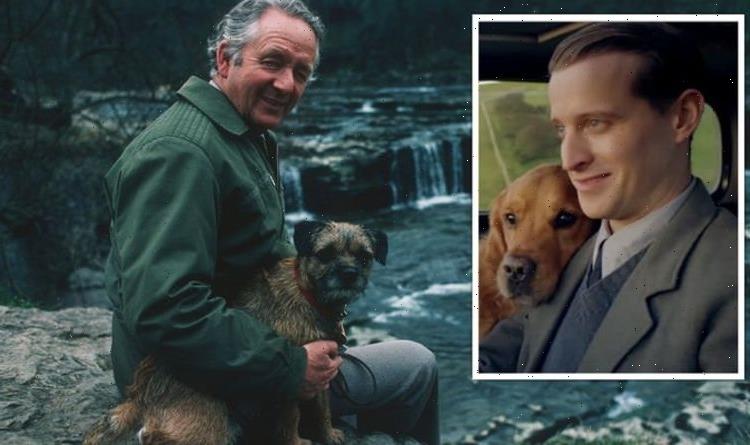 All Creatures Great and Small is on Channel 5 and season two has seen James Herriot (played by Nicholas Ralph) return to Darrowby. The TV series is based on the real working life of Alf Wight, an esteemed vet who used the pen name James Herriot to write his memoirs. Actor Ralph opened up about why he has not read ahead with Herriot’s books.

All Creatures Great and Small has put a smile back on viewers’ faces as James returned to the Dales following a trip to Glasgow.

He was offered a job in his hometown but was pulled back to Darrowby by his desire to win Helen Alderson’s (Rachel Shenton) heart.

The series explores the real-life story of vet Alf Wight, from his relationships to his work with animals.

Wight, under the pseudonym Herriot, wrote a total of eight books set from the 1930s to the 1950s.

When asked whether he had read all of the books, Ralph said: “I try to remain as much in the present as possible.

“But I’ve read the first two books, the ones we had optioned, and I also did the audiobooks so I know them inside out, back to front and upside down.

“Which can be a blessing and a curse! I have not read any ahead because I like to keep within the realm, we are playing in.”

Ralph’s strategic approach to researching his character means he can focus on the exact moment of Herriot’s life each episode is set.

As the timeline in the books goes up to the 1950s, there is plenty of scope for more seasons, which is great news for fans.

The second season is set in 1938, the year before the Second World War.

The war will not feature heavily in this season, but it will be addressed through some of the characters.

The real Wight married wife Joan Anderson in November 1941, so there will also be a wedding on the cards at some stage.

Helen Alderson was inspired by Wight’s real wife, although Joan was not a farm girl herself.

The couple went on to have two children, Jim and Rosie, who may also feature in the series further down the line.

With plenty of Wight’s life story left to tell, fans can only hope more seasons will come.

The first series was a huge hit, and actor Ralph said he could not believe the response from fans.

He said: “It took me a few days to get my head around it. Subsequently, now I’ve seen so many lovely comments about it and it’s so wonderful to hear.

“Coming from a small town in Scotland where no one is an actor, I’ll be playing football and obviously I get the expected craic and the stick but even there they’ve been so supportive.

“People have really taken to it. The odd time where I have been stopped in the street, I am completely happy because people have said such lovely things about how the show came at a really important and rough time.”

Season two will also include a Christmas special, which has already been filmed.

The series has provided the perfect form of escapism for viewers amid the coronavirus pandemic.

Helen Alderson actor Shenton explained how the cast spoke to Wight’s family in order to research their roles.

She said: “Whenever we have spoken to Jim and Rosie, the main thing that they have consistently said is that their parents were completely devoted to each other.

“They would complement each other and push each other in the right direction and there was an unspoken language and understanding between them.”

All Creatures Great and Small airs on Thursdays at 9pm on Channel 5.