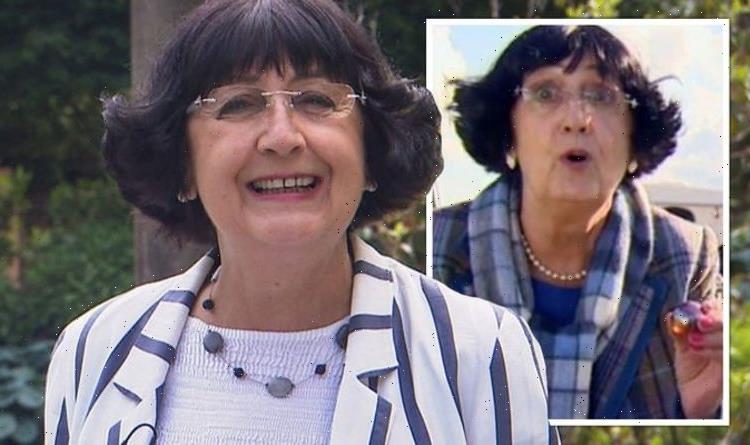 Bargain Hunt continues to air on weekdays on BBC One and the escapist gameshow series features an interesting mix of presenters. Anita Manning features on this repeat festive edition from the Newark Antiques fair. Express.co.uk has all you need to know about the Scottish presenter, including her age.

In the repeat episode of Bargain Hunt today (December 21), Anita takes a look at festive TV habits from previous years.

The Lincolnshire Antiques and Home show hosts the episode, and Anita is eager to learn more about some of the treasures.

The antiques expert was born in Glasgow in December 1947, making her 74 years old.

Anita has been an expert and presenter on Bargain Hunt since 2010.

She is also known for her regular appearances on Flog It! and Antiques Road Trip.

The TV personality is understood to be one of the first female auctioneers in Scotland.

Her love of auctions came from, her father, as he used to take her to events in Sauchiehall Street, in Glasgow.

She bought a bed from an Irish antiques dealer in the 1970s and this kick-started her career as a buyer.

However, she has other interests as she studied dance in both Aberdeen and Edinburgh.

She used to work as a teacher before she got married and had children.

Over time, the mother developed a better knowledge of antiques as she bought furniture for her family from auctions.

She used to tour the country buying and selling antique furniture she had picked up.

Along with her daughter, Anita has been in charge of the auction house Great Western Auctions since 1989. Her son lives in Hong Kong.

The expert has had her fair share of exciting moments as in 2016 she set a record for the largest profit on a single item on the Antiques Road Trip.

She had bought a Buddha statue for £50, which sold for an astonishing £3,800 at auction.

“Being part of the presenting team can be even more fun, as I get to love both the Reds and the Blues, learn more about all their lives and watch over them as they search the fairs for bargains.

“During the excitement of the auction day I can celebrate their profits with them or mop their brows when they make a wee loss.”

Speaking about why she chose a career in antiques, she added: “Although I have always been interested in Antiques, and loved their sense of history, their beauty, craftsmanship and design, I did not start my working life aiming to be an auctioneer or be involved in the Antiques trade (in fact sometimes I still wonder what I’m going to be when I grow up).

“But fate put the opportunity in my path and being an adventurous sort of gal I changed direction and set up Great Western Auctions with my daughter Lala in Glasgow in 1989, becoming one of Scotland’s first woman auctioneers.”

She has since described her career as “the best job in the world” as she loves investigating unique objects.

Anita is known to collect paintings and she is particularly interested in Scottish Art.

Bargain Hunt airs on BBC One on weekdays at 12.15pm