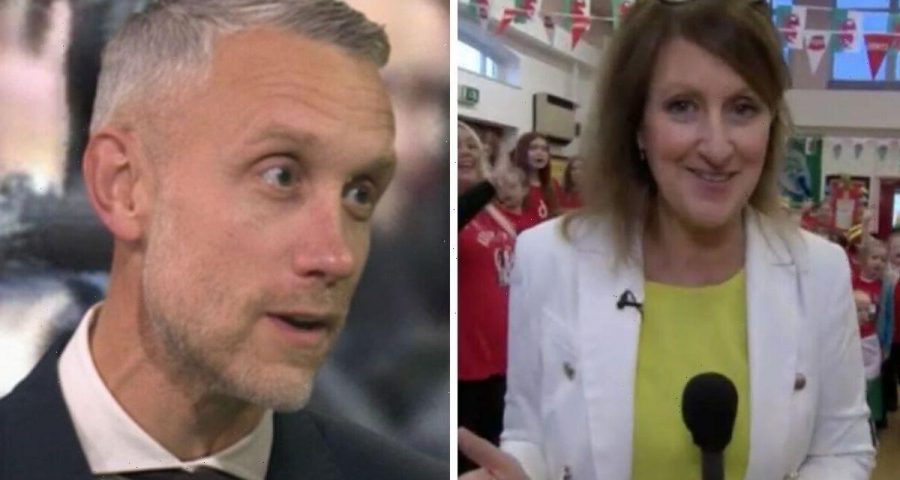 Director of News Content at the BBC, Richard Burgess spoke with Samira Ahmed during BBC Breakfast’s Newswatch about the backlash the broadcaster has received over its coverage of the World Cup 2022. However, the boss was quick to defend the BBC’s coverage, telling the host he was “unapologetic”.

Samira began the segment by reading out a number of angry tweets from viewers.

She said: “The 6pm News began with nearly seven minutes of football news.

“I feel truly blessed to live at a time in history when there is nothing serious happening in the world.

“Stephen Russell contacted us later that evening about the news at 10.

“The programme spent 15 minutes on football 50 percent of the programme. Yet again, we were subjected to scenes of intoxicated football fans asked for their comments.”

Turning to the BBC director, the presenter said: “Let’s address some of those reactions.

“I feel we have spoken about this issue, possibly more than once. What can you say to viewers who feel there’s just too much coverage of the Men’s World Cup on the news, and it displaces the most important stories?”

Defending the amount of sporting coverage, Richard replied: “I know there is a section of the audience that does feel this way because as you rightly say, Samira, we’ve had this conversation before.

“The World Cup is a major event. It’s a global event watched by millions with a real commercial value to it.

“And that forms part of the news and we have to reflect that when a third of the nation is following the England-Wales match that is the news of that day, and so we reflect the match and the activity around the match.

“And I think that’s the right thing for the news to do while accepting you know, there are other stories in the world as well.”

Samira went on to point out: “So following up on that [at] 7pm on Tuesday evening, there were matches on BBC One and BBC Two at the same time.

“So viewers turn on the news channel, looking clearly for something else, possibly news, and what do they get? They get to chat about the matches. It is a bit of a bizarre decision.”

Richard told the host that the broadcaster “needs to be careful”.

“When there’s football on BBC One and BBC Two we offer something alternative on the news channel.

“And we also know that audiences comes sometimes for a summary of what’s happened.

He added: “Well, I think we’ve got a news environment at the moment, which is quite gloomy at times, I would say.

“So I am quite unapologetic about us trying to reflect some of the joy in the nation and the excitement of the nation building up to a big football match and that’s exactly what we will do.”

Since the World Cup began, viewers have voiced their frustrations about the BBC’s coverage on social media.

User @hunt_rss fumed: “Such #Hypocrites them #woke people are at #BBC they should stop showing the #WorldCup matches too.” (sic)

Spencer Mitchell raged: “I hope @itvstudios will have the highlights on later. Just sat down to watch a football game at the World Cup and have to listen to this garbage! @DefundBBC, this coverage is a left-wing, woke, complete joke! #bbc #DefundtheBBC.” (sic)

While Martyn added: “#Newswatch on #BBC talking about the world cup being reported on excessively for bulletins just took up half the programme. Is there no balance?”

During the week, BBC Breakfast viewers also complained about the amount of coverage dedicated to Wales, with John Williams raging: “I haven’t seen a single minute of British TV coverage, but it’s great to hear the Welsh team have actually been getting some attention for once from the BRITISH Broadcasting Corporation.” (sic)