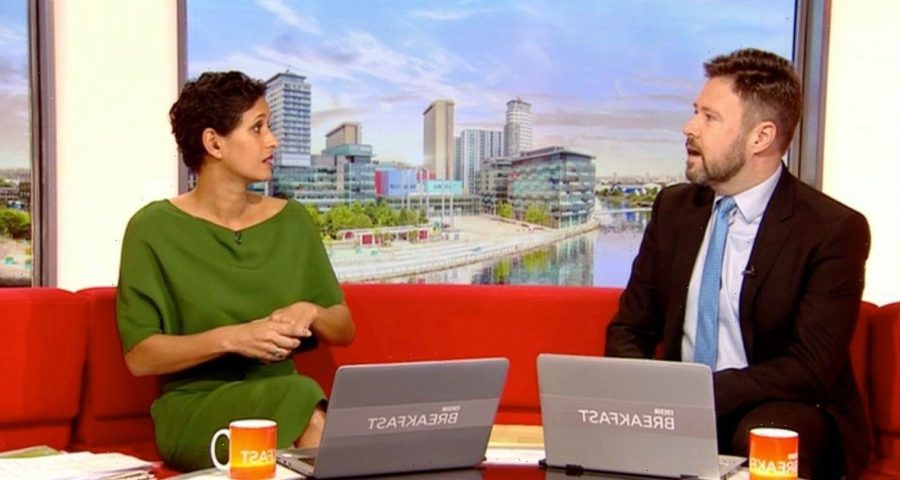 BBC Breakfast host Naga Munchetty was forced to apologise to viewers during Thursday's instalment of the morning programme, after a tense exchange with her co-presenter Jon Kay.

The pair were hosting the show together in regular presenter Charlie Stayt's absence.

It began as they introduced the topics of the day – including the return of iconic children's show Grange Hill as a feature film and a young man who is building up Teletext service Ceefax for the modern era.

Naga kicked off the conversation by laughing: "All I can say this morning, you’re gonna say the same thing…"

Grinning, his co-star added: "Ceefax. Our morning meeting was literally spent recalling how much fun we used to have with Ceefax!"

"But it was like… you got the TV guide, you got the news. You had to sit for ages watching Ceefax pages!"

She added: "You could book holidays on it – our director Tim remembers that!"

But things then took a swift turn for the awkward, as Jon was forced to correct Naga on her assessment of the service. He said: "No, that was on ITV. Oracle, wasn't it?"

A red-faced Naga said: "Oh, you couldn't book it… oh! Ceefax was BBC."

Clearly sensing the tension, Jon said: "Well, maybe you could, I don't know."

Steering the conversation quickly on, Naga said: "And you got all your news updates and your weather. Oh, it was fabulous!"

The awkward segment of the programme, however, wasn't quite over, as Jon hedged: "It’s just like that thing they call the internet!"

Taking the whole thing in his stride, Jon giggled to the camera: "You’re watching breakfast on the 6th of January 1986! Thank you for joining us this morning."

BBC Breakfast airs daily from 6am on BBC One.