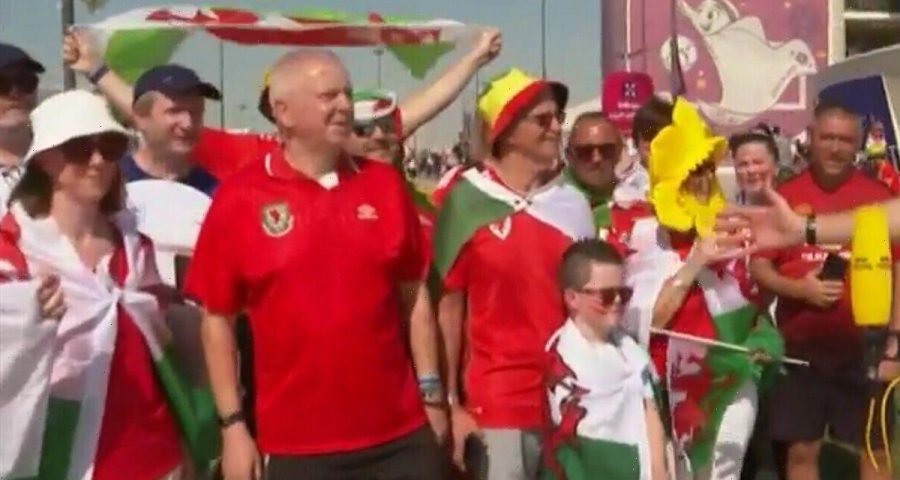 Wales and Bale prepare for World Cup clash against Iran

John Watson spoke to different groups of Wales supporters outside the Ahmed Bin Ali Stadium in Qatar as the football fans prepared for Wales v Iran. However, BBC Breakfast viewers took to Twitter to slam the 2022 World Cup coverage when John encouraged the fans to sing.

Speaking to one fan, John said: “How special is it to be on this stage such a long time away [from the last time Wales were in the World Cup].

The supporter replied: “It was a little bit disappointing the first half in the first game but I’m sure the boys will put it right.

“Feels a little bit surreal in the sunshine when everybody is watching it at home in the rain.

“But I’m sure the boys will put a performance on and let’s get those three points.”

“Talking of big performances,” John interjected. “Can you guys do one for us now, get those voices read. What about a Yma o Hyd?”

The football supporters began to sing the Welsh folk song as BBC Breakfast returned to the studio.

Hitting out at John’s request, BBC Breakfast viewers criticised the focus on the World Cup.

@paulomurphio tweeted: “Seriously filling with all these interviews with Welsh fans how many people do they think are watching this rubbish in wales it’s seriously low brow and fairly cringeworthy #BBCBreakfast.”

@judithredmonds agreed: “I think the myth that every Welsh person can sing has been totally dispelled now! @BBCBreakfast.”

“@BBCBreakfast stop asking the Welsh supporters to sing, you seem to find ones who cant sing and its utterly terrible TV and painful to watch,” @chrisbuller1 shared.

He reflected: “You’ve got to feel confident. That second half against USA was a great performance.