Ben, 45, has been filling in for Piers Morgan, 55, on Good Morning Britain since the start of the summer, hosting the show with co-star Kate Garraway, 53. ITV viewers will know the presenter is also well known for overseeing proceedings on afternoon quiz programme Tipping Point. As production on the teatime quiz show restarts following the coronavirus pandemic, the presenter today announced he would be stepping down from his GMB role to oversee proceedings.

Just after the pair opened the programme following the first hour of the show, Kate said: “This is Ben’s last day.”

Jumping in, her co-star explained his departure was because it was the “peak time” to film new episodes of the quiz show.

“We’ll be back in the studio, all socially distanced set so I’m not going to be here,” before shutting down the idea he was going to be “putting his feet up”.

“Of course you’re working,” Kate sarcastically remarked, before joking: “Asking questions and loading up a machine.” 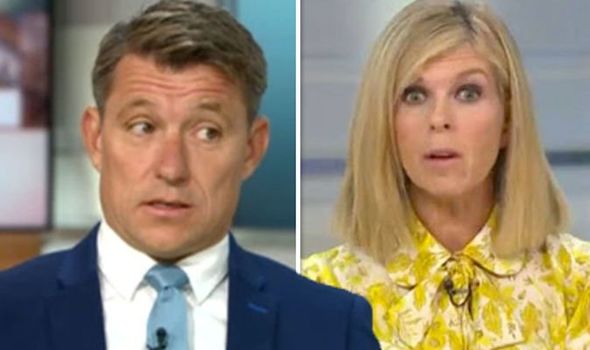 It seems viewers will miss the presenter as one wrote on Twitter: “@kategarraway and @benshephard are just brilliant. Their relationship is great. #gmb.”

Another added: “@benshephard @kategarraway I adore you both #gmb,” with a third commenting: “@kategarraway and @benshephard have got me in stitches this morning. Oozing all over the show #GMB.”