Today’s new episode of Tipping Point saw Ben Shephard welcome budding quizzers Gary, Jean, Hope and Simon onto the ITV show. Each of the contestants were keen to take as much money as possible from the machine but to do so, they’d first have to answer a series of questions to have a chance to knock some counters out. However, it’s fair to say all of the players weren’t quite on top form, leaving Ben dumbfounded by the number of penalty pot counters they gave up.

In the first round of Tipping Point, each player has three chances to knock counters out of the machine.

If a player answers a question right, Ben gives them a chance to tackle the machine but if they’re wrong, a counter is taken away from them.

Today saw a staggering six counters overall confiscated from the team, a number Ben wasn’t sure he’d ever seen before.

“I don’t think we’ve seen that many before,” Ben commented as he put all six up for grabs for one lucky contestant. 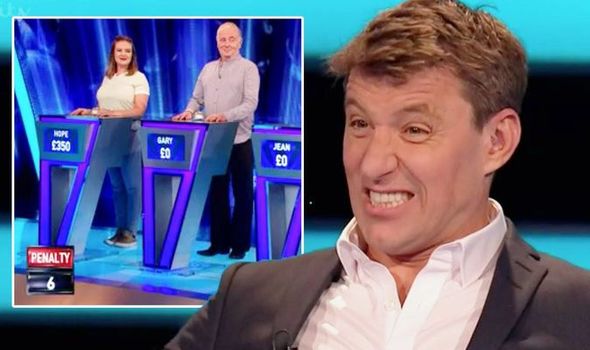 With both Gary and Jean sitting on a total of £0, and Hope and Simon left on £350, all of the players were hoping they’d get access to the penalty pot.

However, it was Jean who buzzed in fastest to provide Ben with the right answer to the penalty question of “how many years are in a half century?”

Jean racked her score up to £750, knocking Gary out in the process.

This left Jean, Simon and Hope with it all to play for as the show entered its second round.

Ben wasn’t the only one taken aback by the less than impressive efforts of the team in round one.

It didn’t take long for hundreds of ITV viewers to weigh in with their thoughts on their efforts.

“Currently all the counters are in the penalty pot [laughing emoji] #TippingPoint,” tweeted one fan.

A second said on Twitter: “Late to the show today – six penalty pot counters? What’s been going on? #tippingpoint.”

“It’s more of a penalty barrel than a penalty pot today #tippingpoint,” joked a third viewer.

A fourth weighed in with their disbelief, claiming: “Never seen such a high penalty pot. #TippingPoint.”

“#Tippingpoint Five minutes in and already there are three f*****g counters in the PP? Good grief!” exclaimed a fifth, while a sixth commented: “World record penalty pot!#tippingpoint.”