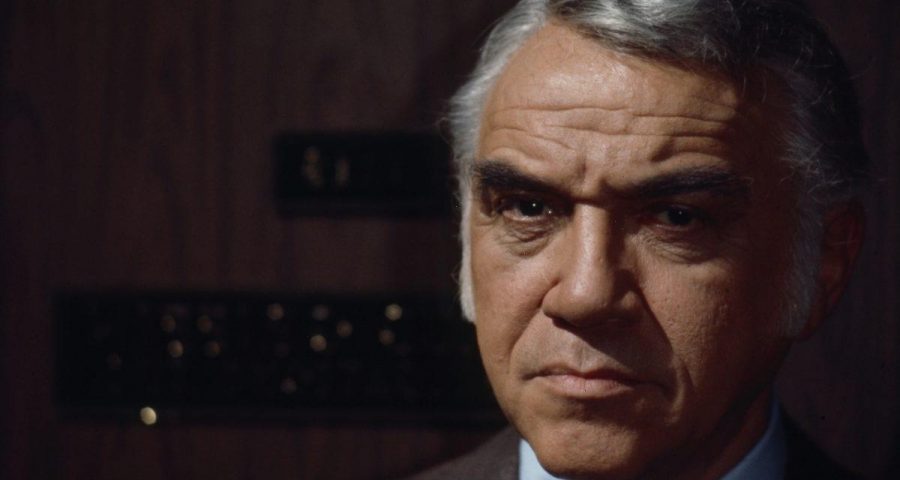 Anyone who loves the westerns would agree that Bonanza is perhaps one of the genre’s best tv shows to have ever aired. Bonanza ran from 1959 until its sudden cancellation in 1973 for a record 14 seasons.

The show featured some big names, including Dan Blocker, Michael Landon, and Lorne Greene. Before Greene starred in the western show, he was a CBC broadcaster. During his time working for the broadcasting company, he earned a villainous name. Find out what name Greene went by.

No one knows when Greene started going by Lorne

The actor was born Lyon Himan Green in 1939 to Daniel and Dora Green, Russian Jewish immigrants. His mother called him Chaim, and the name Hyman appears on Greene’s report cards. In his biography, his daughter Linda Greene Bennett reports that no one knows when Greene started using the name Lorne or added an ‘e’ to his last name.

The actor began acting while at Queen’s University, where he found his passion for broadcasting on the campus radio station. Greene gave up on a career in chemical engineering and instead chose to venture into radio broadcasting after graduation. He landed a job working for the Canadian Broadcasting Corporation (CBC).

Greene was known for his role in ‘Bonanza’

Greene made his first Hollywood appearances in The Silver Chance playing Saint Peter. He accompanied that with several other American film and tv appearances. In 1955 the star appeared in Sailor of Fortune, a British Canadian tv series.

In that same year, Greene played Ludwig Van Beethoven in You Are There and starred in Julius Caesar as Marcus Brutus. In 1959, Greene landed a substantial role in the western series Bonanza. Bonanza was the first one-hour series of the western genre to be filmed in color.

Bonanza was a show about the Cartwright family featuring Ben, the family patriarch, and his three sons, played by Dan Blocker, Pernell Roberts, and Michael Landon. The show tackled serious issues like racism while maintaining its relatability and beautiful scenery.

Fans loved the show for years, so it came as a surprise when they got news of the show’s cancellation.

Television Obscurities reports that the new season’s storyline would have involved the death of Blocker’s character’s wife.

Unfortunately, Blocker died before they started filming, which threw a wrench in production. The star died of a blood clot after gallbladder surgery at the young age of 43. Greene reckoned that after Blocker’s death, he couldn’t see how the show would continue.

Greene had confided in his wife that the show would die without Blocker since he was a fan favorite, and true to his words, the show ended. Bonanza became one of the first shows to kill off one central character after announcing Blocker’s death.

Greene played Ben Cartwright, who was also known as Pa. The series made Greene a household name. He capitalized on his Cartwright image by recording several country songs, including ‘Ringo.’ The piece referenced the life of the Old West outlaw called Ringo.

Greene was called ‘The Voice of Doom’

Upon landing a job with the CBC, Greene was assigned the position of principal newsreader. The company called him ‘The Voice of Canada.’ However, the actor soon earned another nickname due to his role in delivering stressing war news in a resonant tone after Canada entered the Second World War in 1939.

According to Me TV, Greene’s delivery of bad news earned him the nickname ‘The Voice of Doom’ from listeners. In his broadcasting days, Greene also invented a reverse chronometer that ran backward to help broadcasters keep time of programs and estimate how much time they had to speak.