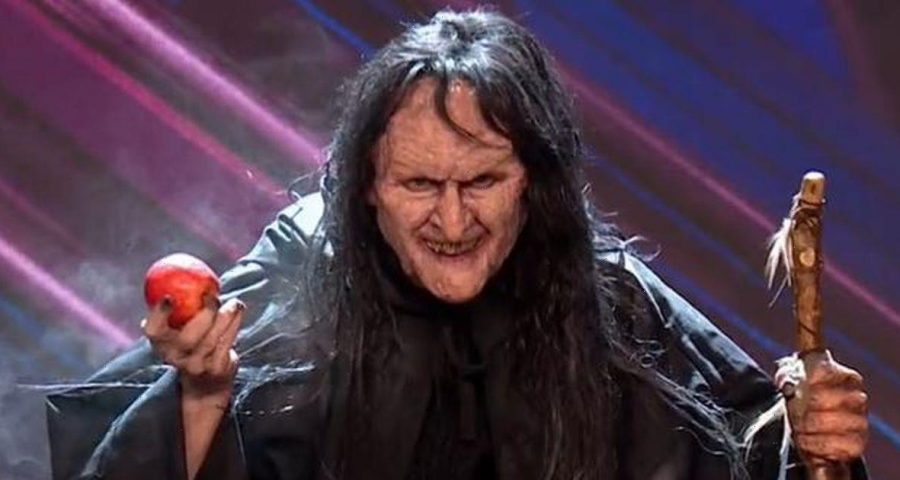 Britain's Got Talent viewers have shared their thoughts on who they think is behind The Witch's facial prosthetics.

Scaring the living daylights out of judges Simon Cowell, Amanda Holden, Alesha Dixon and David Walliams, the contestant – who simply referred to themselves as 'The Witch' – made their way down to where the judges were sat as Simon looked petrified.

They then proceeded to hand out apples to David, Alesha and lastly Amanda as they continued to recite a creepy chant.

Eventually Amanda had two apples in her hand and, as The Witch's terrifying third arm came out of their body and smashed one of the apples up, maggots and cockroaches scattered the judge's desk, sparking Alesha to jump out of her seat.

Many took to social media to share their thoughts on the terrifyingly brilliant performance, while others made suggestions on who they think the contestant is – with many guessing that it's either BGT hosts, Ant McPartlin or Dec Donnelly.

"I think ‘The Witch’ is @antanddec Dec in disguise!" wrote on person, as another person said: "That witch actually looked like Ant (@antanddec) on an under cover! Haha #BGT".

Another viewer said: "When that witch came out I thought it was Ant undercover and I don’t know why #bgt".

"no why does the witch actually look like Ant?" someone else suggested.

Meanwhile, others comments on how brilliant the act was. Someone said: "I liked the witch! Hope it scared all the kids on the set. Hahahaa! #BGT".

"Omg the witch that was so good usually find “scary” things on this really naff but that was sooooo brilliant #bgt," another viewer wrote.

"The witch act was actually good though the acting and the Concept.. it’s actually attention grabbing and unique for one of the first times this season lol," penned a third.

Prior to this season beginning, Simon promised that viewers could expect some "brilliant" acts.

"I have to say, the contestants are brilliant, we have seen so many good acts this year. So many great stories have come out of auditions too," he said.

"I think sometimes having the little break that we did is a positive thing. I think they realised how important the show is to them because they need a show like this for whatever they want to achieve in their lives. Everyone felt more excited about it."

For updates on all your favourite celebs & TV shows, sign up to our daily newsletter here.