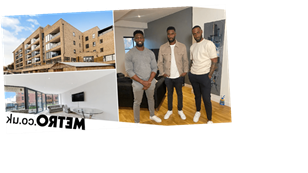 Three brothers are raffling off a two-bedroom, two-bathroom apartment worth £290,000 – and a ticket will cost you just £2.

Daniel Twenefour and his brothers Jason and Will, have teamed up to help one lucky winner live mortgage-free in an Essex property – where the average rental for similar properties is £1,400 a month.

This is Daniel’s third house raffle – having successfully raffled off his own three-bedroom property in Mitcham, South London to Rachel Brown from Hampshire in May 2020 worth £400,000, where he surpassed his target of selling 200,000 tickets.

The three brothers also held a second raffle, which was for a £425,000 three-bedroom home in Surrey – won by Cynthia Kanyua from Middlesex.

As for the Essex home, the raffle prize draw is due to take place on 13th March and will include the transfer of the property to the winner free of stamp duty and legal fees.

The flat is situated on the first floor of a residential complex near Lakeside Shopping Centre and features two double bedrooms, an open-plan kitchen and living space, a family bathroom and an en-suite shower room.

It is pretty spacious and is currently decorated in neutral tones throughout with a modern kitchen and floor-to-ceiling windows in the living room looking out onto the complex, offering plenty of natural light.

Outdoor space lovers will be pleased to hear that the apartment also has a private balcony. It also has an allocated parking space, and there are 122 years left on the lease.

The Twenefour brothers hope to sell 170,000 tickets, but if the target isn’t reached the winner will instead be offered 70% of the money raised.

Daniel said the previous raffles were particularly popular with young people and he was contacted by numerous people begging him to do another property giveaway to help them get on the property ladder.

‘During a time when everyone is anxious, stressed and/or worried its nice to give people hope,’ he adds.

‘When we went live with the Essex raffle we looked at the responses and feedback and was all very positive – it felt like we had a community behind us.

‘Running this competition is not easy but knowing that someone’s life will be changed – and probably their next generation – makes it all worthwhile.’

The draw will take place in the presence of a solicitor and you can get your tickets online now – and there’s no limit on how many you can buy.