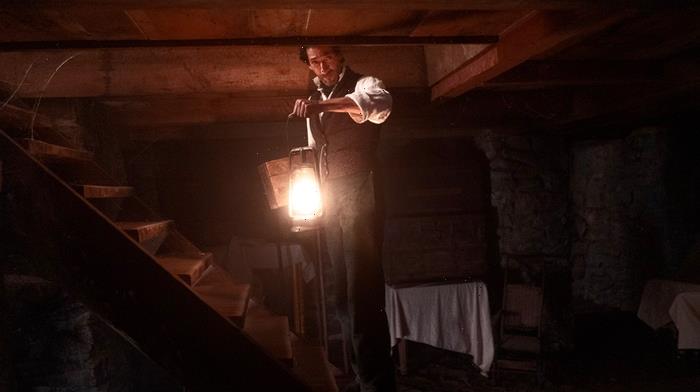 Chapelwaite, the EPIX series based on Stephen King‘s short story, “Jerusalem’s Lot,” is making its way to the small screen this weekend. The series is set in the 1850s and stars Adrien Brody as Charles Boone, a sailing captain who relocates his family to his ancestral home in Maine after his wife dies at sea.

In anticipation of the series premiere, I had a video chat with series creators Jason and Peter Filardi and executive producer Donald De Line. Make sure to read our review of Chapelwaite and then check out the series when it premieres on August 22, 2021.

This interview has been lightly edited for clarity.

The show deals with grief pretty extensively. What was your inspiration for handling that material and going down that road? I know some of that is in the short story, but what other works did you look at to handle the grief aspect?

Jason Filardi: As it’s been pointed out, it’s a dark show and we figured we want it to start off at a place as dark. So the idea of having Charles Boone, the Boone family lose their mother, their wife, right in the start and showing where this family is beginning in a state of grief, we might say. And how that would color the character of Charles Boone now that he’s a single father and he has to take care of these three children, which he’s not used to, not accustomed to, these three grieving children. We thought it was an interesting point to jump off and show this family from the start.

Peter Filardi: It was also if you think of Charles Boone, and he’s a man who, when we meet him, he’s always feared that he may suffer from hereditary madness. So he’s always kept a distance from his children. And then when his wife dies, he’s jettisoned into this role where suddenly he has to pivot from captain to father. And it just puts your protagonist in an interesting position and gives him an interesting arc or a place to grow.

Donald De Line: And I think that’s something really interesting because him having to step up as a father, he did not have a good father. He had a bad father, and I think it was very scarring for him in his life. And emotionally, this is an opportunity for him to kind of pass on a different legacy to his own children. He hasn’t really been able to open up emotionally as a father or be there for his kids, but now he really has to. No matter how hard it is for him, nothing’s going to stop him from doing that with the mother gone.

Tell me a little bit about the Othering aspect that the family faces. How much of that is xenophobia, and how much is just the town being distrustful of anyone who lives in that house?

Jason: Well, in the original short story, there is some of that already. When our character moves into the home, the town and his manservant goes out into town, he’s greeted with hostility. So we had something to start with and–

Peter: Yeah, it’s kind of a house, Chapelwaite is a house of lore, and–

De Line: Well, they felt the Boones were cursed. There was something odd going on. They were suspicious and distrustful, they were wealthy, so they looked at them kind of disdainfully for that reason, because they felt they were always less than the Boones in a sense. But then these strange occurrences would go on and they developed this mythology that they were bad people. And that’s how prejudice starts, I guess. And then bringing in these children who are mixed-race kids adds fuel to that fire. So it was something that was really interesting for all of us to explore.

Where did you draw inspiration for the vampires in Chapelwaite? There’s a description of them in King’s work in the short story, in the novel, and in the Dark Tower books, but where did you pull the visual look and some of the other aspects of the vampires for this?

Peter: We wanted to go back to the folk roots of vampirism and we wanted to deconstruct the vampire, strip away the glamor and some of the sexiness and just get to the graveyard, feeding, vermin, killers that they originally were. And so that was our inspiration in the look and the behavior of our vampires.

And would you ever consider, down the road, crossing Chapelwaite over with some of the other King stories since some of those are interconnected through the Dark Tower books? Is there anything you’d like to see open up in that world?

De Line: Good question. We would be delighted to do that. I don’t know if we zeroed in, I know the guys have ideas about this story continuing anyway, but in terms of crossing over with other King stories, that’s really interesting. Did you guys ever think about that aspect?

Jason: I got to be honest, no. But I thank you for that question. [Jokes with Peter about ideas.] Yeah, now we got to start thinking.

Absolutely, yeah. They’re all connected by The Dark Tower. A little more down-to-earth question. How was filming on location in Nova Scotia?

De Line: Amazing. It was such an adventure and it’s such a beautiful place. And we were at first kind of puzzled because none of us had been there, and we were kind of curious about exploring there, and how we were going to get crew, and really to the level of where we all thought it needed to be, and we just found these incredible artisans and people that came together. Our production designer was local, Matt Likely. And he had worked on Robert Eggers’ movies, like The Witch and The Lighthouse. And we just had this wonderful team that really delivered. We feel very, very proud of what we got, production-wise out, of the experience. And this was not a show that we spent tons of money on, we had to do it on budget and got the look that we got and the authenticity, and we felt very proud of that.

If you could adapt any other Stephen King work, what would it be?

Jason: Well the problem is my favorite Stephen King is The Shining, of all time. And I think that was done pretty well. So I wouldn’t want to touch that with a 10-foot pole but yeah, that’s my favorite.

Jason: Yeah, that’s a good one.

Peter: I think that’s one of his best, really good stories. I know it’s been adapted, but…

Is there anything else that you would like to share about Chapelwaite that you think folks just really should know going in, either before they see the show or after? What do you think the audiences should take away?

De Line: Well, I would say that it’s definitely worth the journey because our story just builds and keeps unfolding. And I think one of our great strengths is our finale and how we end this story, which is one of the really satisfying elements. And it’s really hard to come up with a great ending in my opinion. And I think Peter and Jason really nailed that brilliantly.

Jason: Thank you. And I think as Donald had mentioned before, for us, this was not just a horror and a civic linked in but a family drama. We call it a drama more in a way. So we hope that we’ve done enough, that you connected with our characters from the start, and you feel for them, and you want to take this ride with them. And like Donald said, stick it out to the end because we feel like there was a pretty satisfying, although maybe dark end…it’s satisfying. And we hope you just have fun. I mean, this sit down and you’re excited to tune in every Sunday night and see what happens to this family next.

De Line: And get scared along the way.

Are there any specific gross-outs or scares that stuck out, that you just cannot stop thinking about?

De Line: Okay. I have mine. It involves a razor blade, but I don’t know how you guys feel.

Peter: We have some good spontaneous combustion.

De Line: Oh yeah, that’s terrifying. That is really something that you don’t see every day.

Jason: Yeah, we got some good kills. We got some gross stuff with worms.