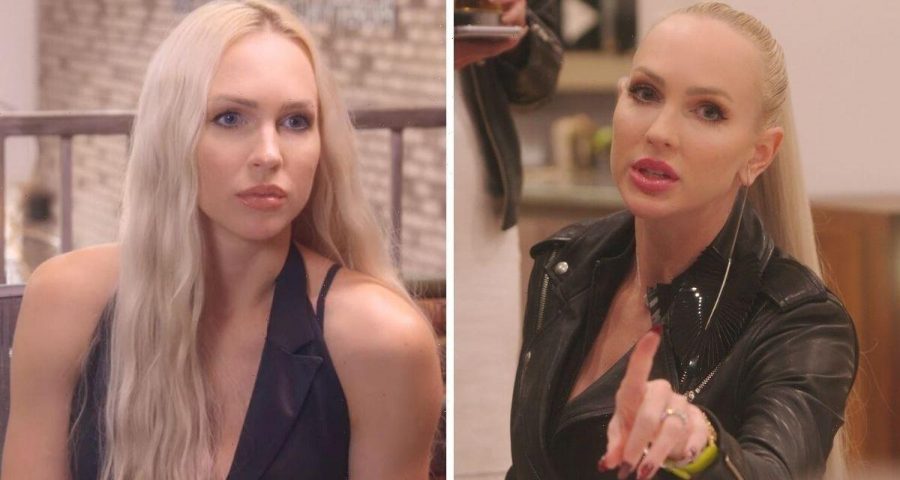 Netflix’s hit real estate reality show, Selling Sunset returned to screens last week for its fifth season, and while fans celebrated its comeback, not everyone was pleased. Star Christine Quinn was on a warpath and launched a savage dig at the show’s bosses for fabricating the storylines.

The series followed the professional and personal lives of the agents working in the luxury real estate market for The Oppenheim Group.

While the women secured deals for the affluent residents of Los Angeles, this season Christine found herself at the centre of the drama on multiple occasions.

This was seen in episode nine, when she was forced to face allegations of bribing a client to work with her instead of Emma Hernan.

As a result, Christine fiercely rejected the accusation and took to Twitter to bash the show’s bosses.

She wrote: “30 minutes till the launch of [Selling Sunset] enjoy the new season and all of its 5,000 fake storylines!”

Although the agent didn’t directly address the allegation, her tweet alluded to it by using the amount she was accused of bribing.

Many fans took her side and used the social media platform to share why they didn’t believe the bribery storyline.

@Zinn_le stated: “It just makes ZERO sense why Christine would bribe $5000 to a RICH client for a listing.”

They added: “My gut feeling, Chrishell may be behind this because in earlier episodes, Jason told her he would fire Christine if she was unethical, then bam Emma??..”

Also in disbelief was @dorianbanisterr who shared: “this Christine bribery storyline is so obviously contrived, if Christine is so calculated why would she compromise her job/reputation for… Emma?”

@360marvels tweeted: “People really believe the bribery story? like if it ever had to happen Christine would’ve given way more than 5K lmao she’s not cheap.”

Another fan, @iiamtremz tweeted: “So I’m supposed to believe that [Christine Quinn] would bribe a million-dollar client with $5000.00? This is actually laughable.”

Mary was shocked by the allegation, but Emma claimed Christine was “out to sabotage” her “in any possible way.”

Their boss and founder of the Oppenheim Group, Jason Oppenheim refused to believe Christine would go so far as to sabotage anyone’s career.

He then recalled the moment she became one of the first agents he hired for his company, even though he was still taken aback by the allegation.

Christine was then called in by Jason to discuss the $5000 bribery claim, however, she failed to show up and clear the air.

As a result, fans began to speculate whether or not she had left the show, especially after it was revealed Christine would no longer be starring in the reunion.

These rumours were then fuelled after the agent unveiled her new company on Instagram, RealOpen.com

In the caption, she added: “Why work for someone else when you can be your own CEO?”

Selling Sunset is available on Netflix.