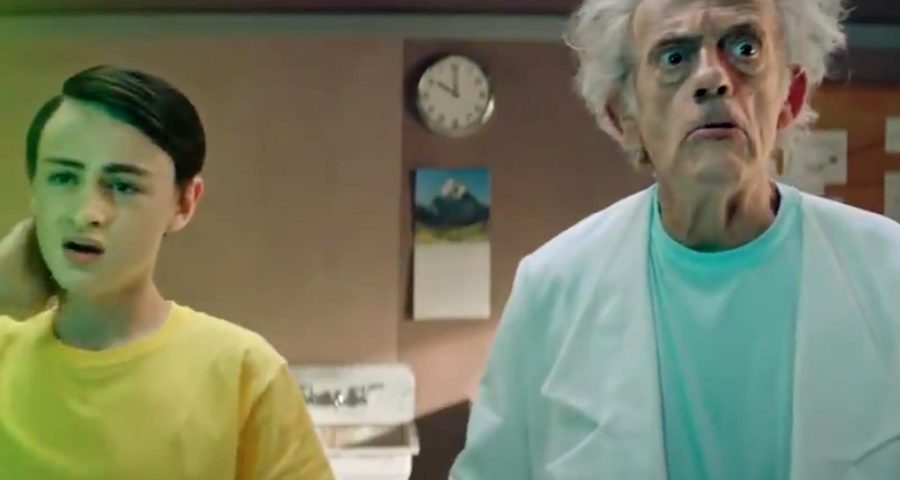 Christopher Lloyd appears as the live-action version of the cartoon mad scientist he partly inspired, Rick Sanchez, in a new trailer for the Season Five finale of Rick and Morty, airing this Sunday, September 5th.

Adult Swim shared the 14-second clip on social media Friday, with live-action versions of Rick and Morty (Jaeden Martell) popping out of a wormhole, and Rick proclaiming with a characteric belch, “Morty, we’re home!” (The “C-132” in the tweet’s caption is a nod to how different universes within Rick and Morty are named, with the main events in the show being set in universe C-137.)

Accompanying the short clip, Adult Swim also shared a much longer trailer for the finale, which shows the titular grandfather-grandson duo ostensibly drifting apart after five seasons of interdimensional adventures and a lot of psychological strain. That trailer features nothing about any live-action sequence and it remains to be seen if Lloyd and Martell will be involved in the actual episode, or if this was just a clever bit of stunt marketing.

Either way, casting Lloyd as Rick is some quality fan service. Rick and Morty began as a Back to the Future spoof called The Real Animated Adventures of Doc and Mharti, and Rick still retains the lab coat and wild hair look of Lloyd’s Back to the Future character, Doc Brown. In a 2018 interview with the Phoenix New Times, Lloyd was asked about the show and said, “I don’t follow it closely, but I’ve seen a few episodes and I gotta tell you, I think it’s a lot of fun. I know it’s some kind of parody of Doc and Marty.”