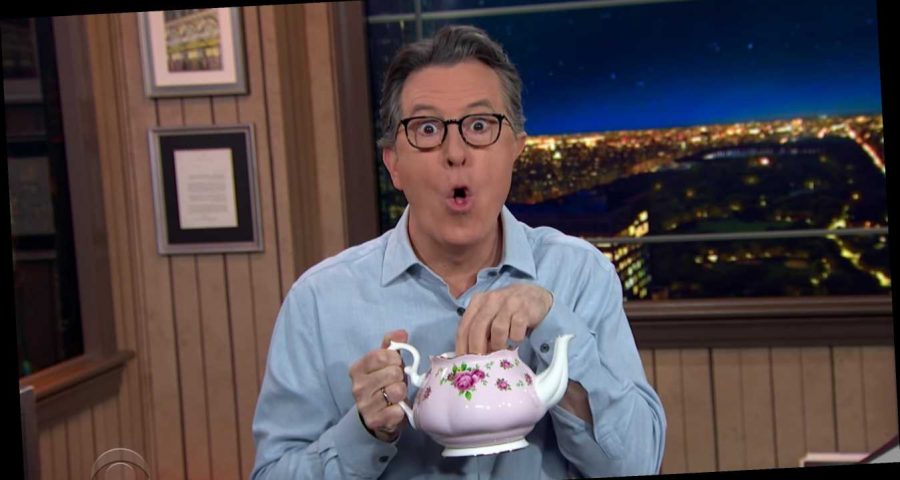 Stephen Colbert, Jimmy Kimmel, Jimmy Fallon, and Seth Meyers (with some help from Amber Ruffin) busted out the tea and crumpets as they broke down Meghan Markle and Prince Harry’s interview with Oprah Winfrey on their respective late-night shows Monday, March 8th.

On The Late Show, tea kettle full of popcorn in hand, Colbert offered a comprehensive look at all the major moments, like when Markle said she had no idea what marrying into the Royal Family would be like because she didn’t look up her husband online.

“Let me introduce you to this thing called ‘Google,’” Colbert cracked. “It’s full of useful information, for instance, your husband knew Princess Di! That might’ve been a hint that this was going to be a rough gig. Also, while you’re Googling, you might want to try the combo, ‘Andrew,’ ‘island,’ and ‘Epstein’ — it’ll give you an idea what the Royal Family is OK with.”

Oprah's Interview with Harry and Meghan Dragged the Monarchy, Made for Great TV

As for arguably the biggest bombshell of the night — when Markle revealed that someone in the Royal Family expressed concern over the skin tone of her and Harry’s son — Colbert deadpanned, “I’m gonna go out on a limb here and say there is a possibility — just a possibility, mind you — that this Medieval selective breeding program might be… racist.”

Meanwhile, Jimmy Kimmel paid special tribute to Oprah and her interview skills, sharing a montage of all her incredible reactions to Harry and Meghan’s revelations. The host also tried to parse Meghan and Harry’s decision to leave England for America partly because of racism, cracking, “You know things are bad at Buckingham Palace if they came to America to get away from racism. It’s like trying to get some peace and quiet at Chuck E. Cheese.”

Over on The Tonight Show, Jimmy Fallon highlighted Harry’s claim that during a particularly tense period, his father, Prince Charles, stopped taking his phone calls. Fallon shared a faux recording of Harry and Charles’ last call, in which Charles claims he can no longer speak to Harry because Queen Elizabeth is threatening to give the throne to one of her corgis (“Buckingham Palace will become Barkingham Palace”).

And if you need a really succinct breakdown of everything that happened during the interview, over on Late Night, Seth Meyers let writer Amber Ruffin deliver a breathless recap of the entire thing in just 60 seconds. “They were both like, ‘It’s not the Queen who was racist, it’s this group of people who run the monarchy called ‘The Firm,’” Ruffin said. “And I was like, are you talking about that rap group with Nas and Foxy Brown? Then I don’t know who ‘The Firm’ is!”