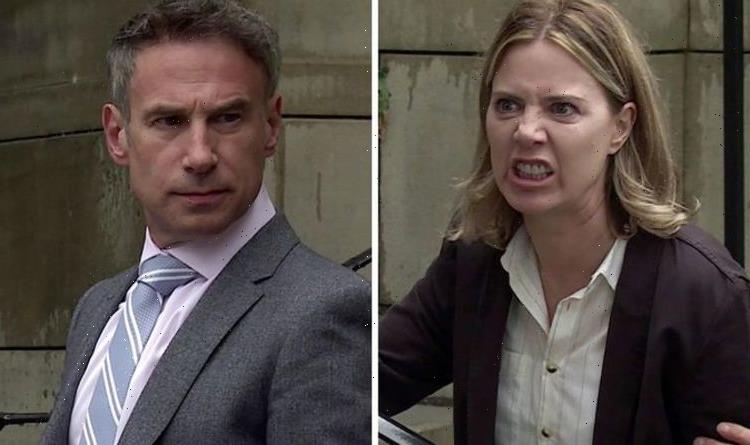 Corey (played by Maximus Evans) was finally revealed as Seb Franklin’s (Harry Visinoni) killer during Monday’s double-bill of Coronation Street. The revelation came after Nina Lucas (Mollie Gallagher) retraced her steps and was finally able to remember what happened the night Seb died. Corey and Kelly Neelan (Millie Gibson) are the two main suspects being charged with Seb’s murder, and up until now Corey has said he was there but blamed Kelly for attacking Seb. However, despite the evidence stacking up against Corey, Abi Franklin (Sally Carman) seems to think the villain might get away with her son’s murder because his dad is bribing witnesses. Will Abi be able to expose Stefan’s (Paul Opacic) sneaky tactics or will he follow in his son’s footsteps and attack her in a bid to keep the grieving mum quiet?

Wednesday night’s double bill of the ITV soap saw Nina took to the stand to share what happened that night.

Despite Corey’s lawyer Sabeen, (Zora Bishop) attempting to twist her words, Nina held her own and stood up for herself.

The episode concluded with Dev (James Harkishin) confronting Imran (Charlie de Mello) in the street about how he treated Asha (Tanisha Gorey) in court when she took to the stand.

Dev hit back at the lawyer branding him a bully. However, the episode concluded with Imran hitting back with how he is going to treat Corey in court.

“Oh mate, you have no idea,” he threatened. “I’m just getting started.”

He threatened: “Do you want to see what I can really do? Come by court tomorrow because what I did to Asha today is nothing compared to what I am going to do to Corey.”

In scenes that aired on Friday night, viewers saw a number of witnesses take to the stand in defence of Corey.

Eli, who is being charged with attacking Nina, lied in the witness box by claiming it was Kelly who killed Seb.

A high-profile football player called Tommy also took to the stand where he claimed Corey was a good role model.

Seb’s mum Abi seems to think Corey’s dad Stefan is bribing the witnesses because they “have money on their side”.

“It’s not about who is right or wrong, it’s about who has got the fattest wallet,” Abi raged to Kevin.

“You’ve got to put your trust in the courts,” Kevin reassured as Abi hit back: “What, when you can wheel in Tommy O.

“That guy was a hat trick away from getting a statue down at County. Who is going to believe Kelly over him?”

“Tommy O is not going to take a bunk,” Kevin replied.

“Maybe not,” Abi said. “But that is my point, you trust him. I trust him, everybody does.”

“If he says Corey is a good lad then the jury is going to eat it up,” she added as Stefan stormed towards her.

“How much is this costing you all of this then?” she quizzed Stefan. “The fancy barristers, the celebrity endorsements, the bribes?”

As Kevin tried to defuse the situation, Abi added: “Kelly had you pegged. I saw your face when she kicked off.”

Stefan replied: “No, it was the shock of being accused.”

“I know a guilty conscience when I see one,” Abi accused as Stefan threatened: “Do you want to see yourself back in court on a slander charge?”

“I couldn’t afford it, could I?” Abi shouted. “But it’s just pocket money to you. Using the court as your own personal poker table.”

Stefan raged back at Abi as he insisted, he had paid for the best but told her it was “above board”.

“My child is dead,” Abi told him. “And your son killed him.”

Stefan concluded: “I am sorry you lost your son I really am, but I don’t want to lose mine too.”

Stefan will do anything to keep his son Corey from going to prison and it is clear to see Abi won’t let things lie. But, what is he really capable of?

Coronation Street returns on Monday at 7.30pm on ITV.